Walt Disney World With A Toddler 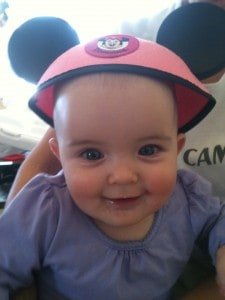 My daughter recently turned 3 and has been traveling with us to Walt Disney World since she was 4 months old.  People ask me all the time if it is hard or isn’t she to young to do anything.  My answer is that there are actually more things a toddler can do than not.  I felt like 2 was a GREAT age with my daughter at Disney World.  She knew what rides she loved and knew a bunch of the characters.  Before a child turns 3 they are also free!  If your child is still in diapers, all the parks have baby care centers which also sell anything you might need such as a bottle, wipes, even formula.  It is obviously a little pricey, but if you are stuck in a pinch it isn’t a bad idea.  The baby care centers are great with nursing rooms, diaper changing tables, smaller potties, and  high chairs.  They also have a sink and bottle brushes if you need to wash a bottle.

At all the parks you can rent strollers, with little ones though it is often nice to have your own stroller for when you aren’t in a park like at Downtown Disney, so keep that in mind.  If you don’t want to bring your own there are companies in Orlando that rent really nice strollers and will deliver them right to your hotel and pick them up when you leave.  This is also a great option.  If you aren’t planning to rent a car and just plan to ride the Magical Express to the hotel you don’t even need to bring your car seat!  This is always nice to not have to lug around one more thing.

If you want to ride a ride that has a height requirement you can do what is called rider swap or parent swap.  This is when one parent goes through the line rides the ride and gets a pass so the next parent can just walk right on.  Ask the cast member at the front of the ride for details.  Also look for the single rider lines on some rides.  The wait time is usually much shorter for the single rider line.

I thought I would compile a list of our favorites to do at Disney World with a small child.

Magic Kingdom:
In my opinion the Magic Kingdom is definitely my daughters favorite park and we can spend the most time there.
Teacups
Dumbo
Winnie the Pooh
Small World
Peter Pan’s Flight
Tomorrowland Speedway (32″ to ride)
People Mover
Buzz Lightyear Astroblasters
Jungle Cruise
Flying Carpets
The Little Mermaid Ride
The Train
Carousel
There are tons of things that we love to do at Magic Kingdom, this is just a MUST do list when we are there. 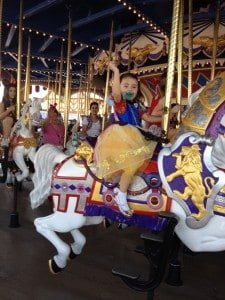 Epcot:
My daughter could spend all day in the aquarium.  I think most toddlers could.  The Nemo and Friends ride in the Seas is a favorite also. 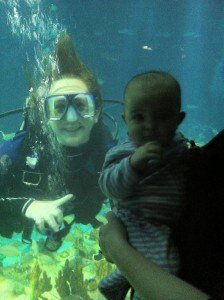 This is a pic of my daughter as a baby with my sister in the water behind doing a dive in the tank at the Epcot aquarium. 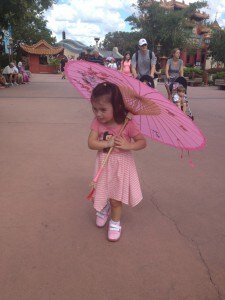 She also loves all the performances in the various countries like the acrobats in China and the drums in Japan.  I HIGHLY recommend a stroller for Epcot though because it is A LOT of walking.

You can get a cardboard Duffy (or sometimes Agent P) on a stick to color and then get passport stamped at the various countries. My daughter really enjoys doing this. 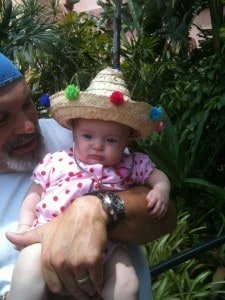 My daughter at 4 months old at the Mexico Pavillion. 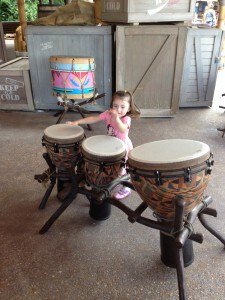 She always stops to play the drums in between China and Germany.

Hollywood Studios:
The Disney Junior Stage show is GREAT!  We could watch this all day.  It has puppets from Mickey Mouse Clubhouse, Doc McStuffins, Sofia the First, and Jake and the Neverland Pirates which are all of my daughters fav shows.  The Little Mermaid Stage Show is also fun.  They have the Pixar Parade at Hollywood Studios which is a great way to see all the characters from the Pixar films.  During the holidays the Osborne Family Spectacle of Dancing Lights has become a MUST do.  It is amazing! 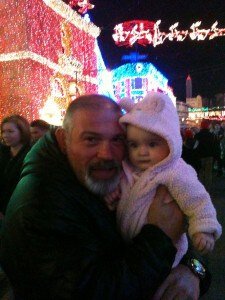 Animal Kingdom:
My daughter would be happy just riding the Kilimanjaro Safaris over and over and over and…well you get the idea. Also though don’t miss the little train that takes you back to the petting zoo. This is great for toddlers as well.

Blizzard Beach and Typhoon Lagoon:
Both are tons of fun for little ones and offer areas specifically for small children.  The toddler area at Blizzard Beach is a little larger of an area than Typhoon Lagoon, but both are very nice.  My family’s favorite is still the lazy river though. When my daughter was very little I would just float around with her on my lap.  Once she got bigger they have inner tubes for little kids that don’t have a hole in the center so it is more like a small round raft. She LOVES these.

My best advice for Disney World with a toddler is don’t set yourself up with a strict time planned schedule and huge expectations of completing all of it.  Just play it by ear and enjoy your child’s reactions to the magic.  Plan on downtime and naps and enjoy every second of it.  They grow up so fast.

Have you travelled to Disney World with a toddler and have more advice?