How does someone get BRCA gene mutation testing done?  What family history does someone need to get screened for the Breast/Ovarian cancer gene?  How much does it cost for the BRCA gene testing?  I’m going to share my story with you and while doing this hopefully help some people in the process. 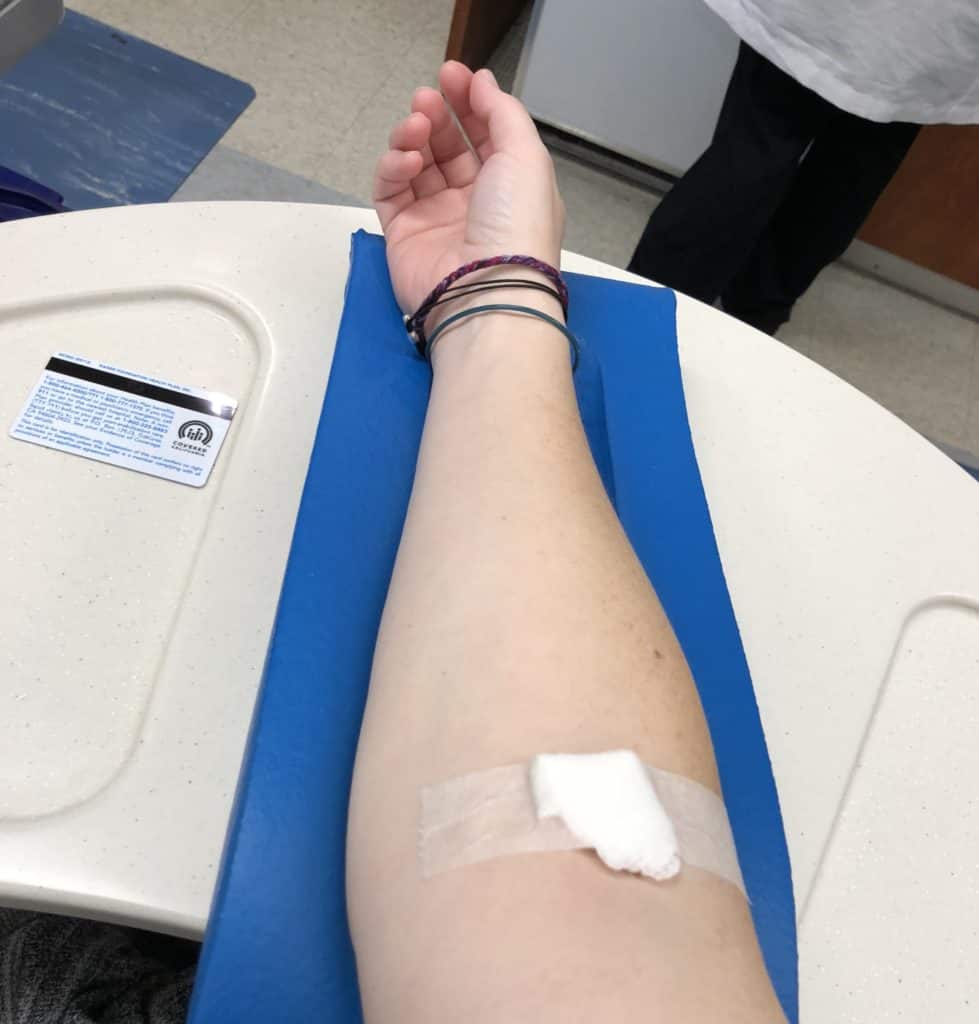 I decided while I am sitting here waiting for my BRCA gene results I would write this as a form of therapy for myself, answer questions that I get asked a lot, and also maybe help some people going through some tough times.  I am also sharing my current medical problems and how I got to this stage.  It might be TMI for some people, so if you are one of those people who can’t handle real talk about female parts this might be your cue to stop reading.

Back story, uterine fibroids run on my mom’s side of the family.  I remember being little when my mom went in to the hospital to have a hysterectomy because of them.  She would be in so much pain she would vomit and they had become so large that she would be asked if she was pregnant.  Fast forward, this is where I am at.  The problem with uterine fibroids is that for some women anything short of a hysterectomy is just a temporary bandaid.  You can have the tumor/tumors removed, but they grow back quickly.  You can have a shot that mimics menopause (along with all the side effects).  There are hormone pills like birth control, but when they get to a certain size this doesn’t help much either.  When I was 28 and pregnant with my daughter at the ultrasound they were able to measure 2 fibroid tumors that were already present.  Luckily they were small then.  Fibroid tumors have a tendency to grow quickly.  My periods have always been relatively long, but about 2 years ago each month they would get heavier, longer and more painful.  From the outside it looks like I run all these races all the time and I’m great, but in the last 2 years I only picked and scheduled races that fell on the right time on the calendar, because there were also days I couldn’t get out of bed due to extreme bleeding and pain.  As a result of the heavy bleeding I am also super anemic.  This makes me feel really fatigued and other side effects due to not having enough oxygen in my blood.  I am on a high iron diet as well as iron pills twice a day.  Having to take this much iron is also no fun on my stomach.  My doctor is also concerned that there is more going on than just endometriosis and fibroids.

I knew that the only answer that would give me 100% relief was a hysterectomy.  I am currently 36 years old and have one child (one beautiful, amazing child).  I always thought I wanted 2-3 kids, but that is just not what is in the cards for me and that is what I had to come to terms with.  So while a feeling of sadness is inside of me because of this, I also have a sense of relief knowing I have the opportunity to get back to my life without pain 2/3rds of the month.

Here is where the BRCA gene mutation testing comes into play.  Two members of my immediate family tested positive  for BRCA 1…including my sister.  My father was diagnosed with colon cancer at 48 and died at the age of 49.  We know that my father was a carrier of the BRCA 1 gene mutation.  So I have a 50/50 shot of not having the BRCA 1 mutation.  In the general population the BRCA gene prevalence is only 0.2 to 0.3%.

The reason it is so important to have the test done before my hysterectomy though is because if I am BRCA 1 positive they would also take my ovaries.  “On average, women with an altered BRCA1 gene have a 50 to 85 percent risk of developing breast cancer by age 70. Their risk of developing ovarian cancer is 40 to 60 percent by age 85.” I copied and pasted those statistics for you.  To put this into prospective women in the general population have a 1.3% chance of developing ovarian cancer…but BRCA 1 carriers have a 40-60% chance.  Breast cancer has a lot of ways to screen for it, but of course isn’t 100% accurate and that scares me, but the scariest part is that ovarian cancer is the silent killer.  By the time of any signs it is often too late.  This is why the doctors recommend that because I need a hysterectomy and if I do test positive for BRCA 1 they remove my ovaries too…at the age of 36.   Here is another copy and paste for you “Surgical menopause occurs when a premenopausal woman has her ovaries surgically removed in a procedure called a bilateral oophorectomy. This causes an abrupt menopause, with women often experiencing more severe menopausal symptoms than they would if they were to experience menopause naturally.”  So to prevent this from happening I would need to be on hormones.

Between the pain, anemia, and stress of it all I cry a lot.  I am writing this because crying is ok and I want other women going through this to know it is ok to cry and you are not alone! I feel so thankful for the health that I DO have and I feel guilt for crying because there are so many people who are worse off than me, but you know what?  That is a normal emotion too.  This process has brought back so many emotions I have of my dad’s death and watching him suffer from chemo as cancer ravaged his body.  I was 16 when that happened and it scares the F**k out of me now that I am a mom, the idea of my daughter having to watch that happen to me. Going through all the emotions of never being able to have more kids, having to have major surgery, the idea that my risk of cancer could be as high as 85%, the thought that I could potentially have passed this onto my beautiful daughter, knowing my sister carries this and that she has had to endure all of this, hormone therapy, pills, hospital stays, visits to the doctors constantly, the financial burden of it all, and I cry.  And that is ok.  Because I say it is ok.  Crying and anger and sadness and guilt are all ok.

I had to do genetic counseling before they would do the genetic testing.  The woman asked me all kinds of questions to feel out if I am emotionally prepared to deal with the news if I do test positive.  The first thing she did is explain the statistics and how they don’t have a crystal ball, but that it greatly increases my risk of cancer and that different forms of treatment suit different people.  She asked me what my gut feeling was, if I thought I was positive or negative.  She asked if I had a husband who was supportive no matter what happened.  She asked if I came out negative if I thought my relationship would be difficult with my sister because she is BRCA 1 positive.  She said while it is great to test negative, those people often have “survivors” guilt because their family members aren’t so lucky.  And a lot more hard hitting questions.  In order to be tested and have insurance cover it I had to provide the test results and medical information for my BRCA 1 positive family members.  The cost could be large if I couldn’t provide this.  Luckily my sister gave the authorization for all of her records to be pulled and reviewed.  Some people are not this lucky and their only means to get tested would be to pay out of pocket.

Along with this I am still dealing with what feels like my uterus is trying to kill me, having blood drawn to check all sorts of other things, a uterine biopsy to make sure that the fibroid tumor is benign and nothing cancerous, and ultrasounds to check out everything else going on and positioning of the tumor/tumors.

My friends and family keep commenting on “you have ANOTHER doctors appointment?”, but that is the downside to our health care system.  I have to have a referral from my doctor to go to the place that does the ultrasounds and then after I go do that I have to go back to doctor for results.  Same thing for each stage of this process.  It is a lot of time and a lot of copays this way.

Meanwhile I try hard not to let this stop me from doing the things I love and my everyday life.  This past weekend I was questioning whether or not to go down to Pasadena Half Marathon and run because I was so emotionally and physically exhausted, but I did.  And I don’t regret that decision for a second.  I currently have no other races planned for the next 2 months.  That is a weird thing for me to comprehend because races are such a huge part of my life.  Currently my next race will be Los Angles Marathon in March and that is my goal.

This took A LOT to share this so publicly, but when I was Googling and searching for women going through this I couldn’t find many first hand accounts and that surprised me.  I figured sharing my story could help others and that is far more important to me than the embarrassment of telling people the gory details of whats going on.   I ask that you be kind with any comments.  I currently don’t know the outcome of any tests.  I have 2 different ultrasounds tomorrow and the uterine biopsy next week.  The BRCA test blood was drawn last week and it could take up to 2 weeks for those results.  I am praying and putting good vibes out there.  ??

Tell the people you love how much they mean to you because knowing there are people around you who care is so important.  ❤

Pin it for later 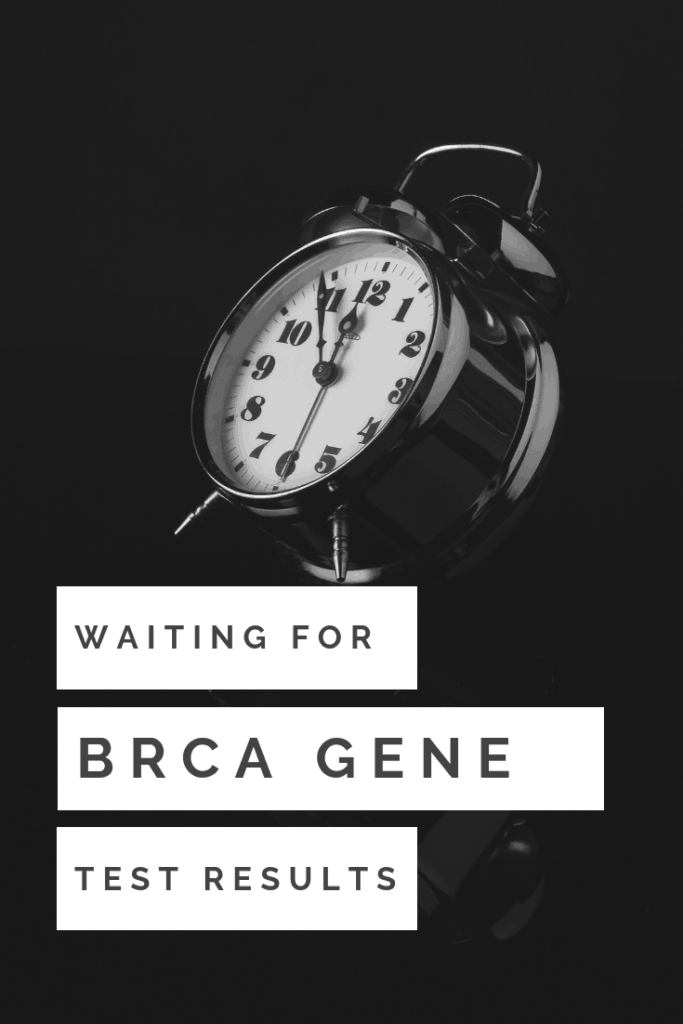