Venice Marathon Race Experience From An American’s Point of View

Let me just start by saying a big thank you to the Skechers Performance Los Angeles Marathon, the Huawei Venice Marathon, and Air France for sponsoring the trip and making this experience possible for me. 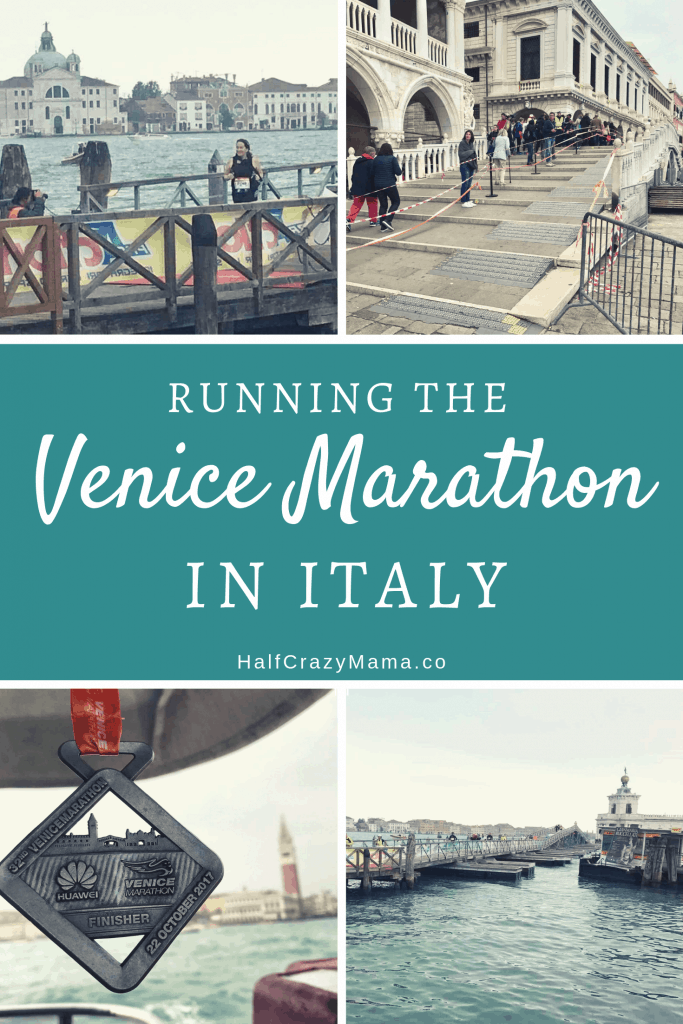 The Venice Marathon was my first international race.  The experience was incredible, but challenging and I am going to tell you all about it.

I left San Francisco on Wednesday afternoon on Air France’s huge Air Bus.  We flew to Paris where we connected to Venice.  I landed Venice around 2:30pm Thursday.  I had never been to Italy before, but had ideas in my head of what it would be like.  Let me tell you, Venice wasn’t at all like what I expected.  It was SO MUCH BETTER!  That isn’t because I didn’t think it would be good, that is just because it was really that incredible! 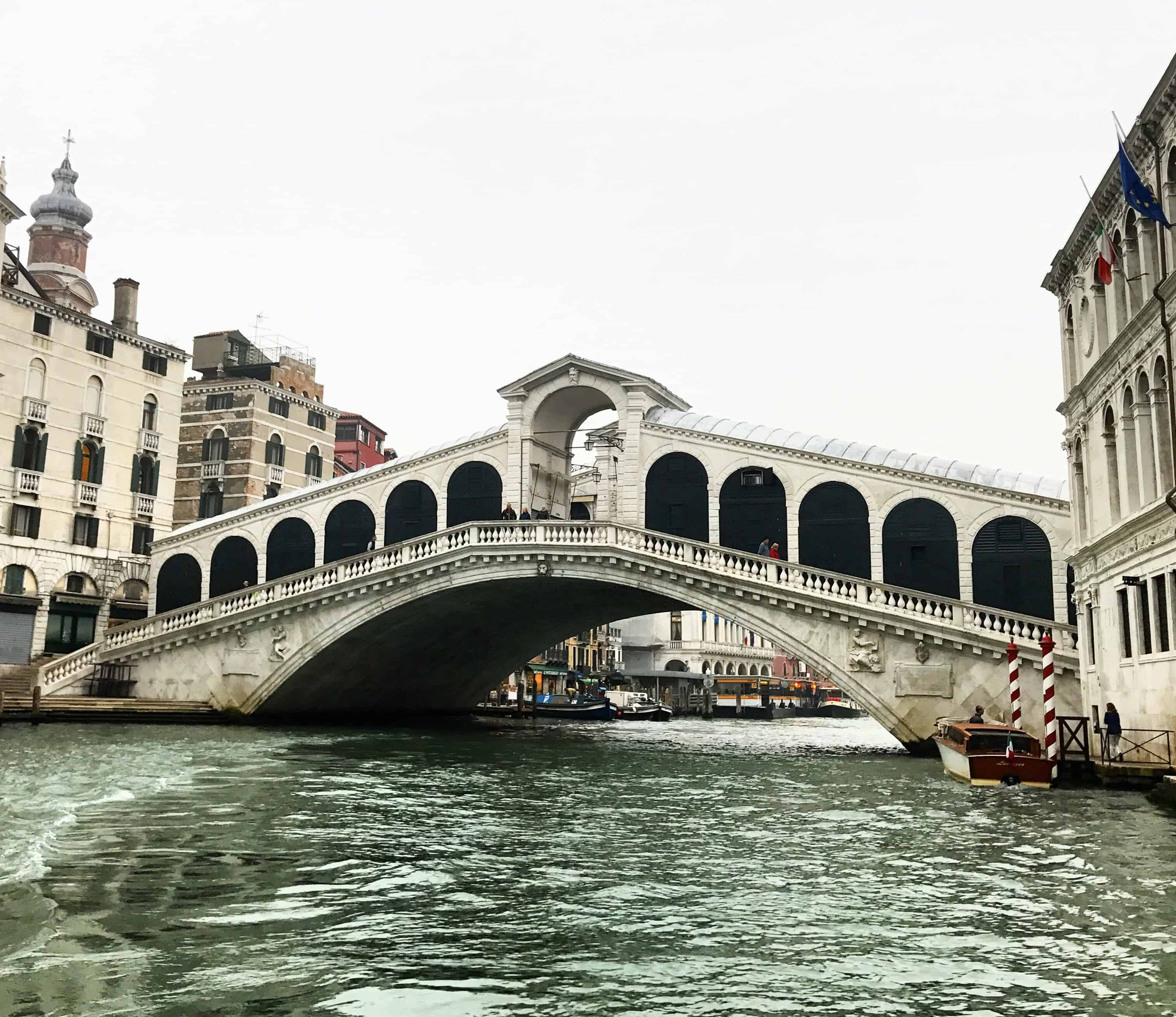 The island of Venice is what most of us think of as Venice.  There are no cars there.  You can drive over the bridge to the island, but you then have to park in one of the big garages right by the bridge.  There are also tons of buses, boats, trains, or a tram that can get you to the island.  Once on the island you either walk, take a water taxi, boat bus, or gondola everywhere you need to go. 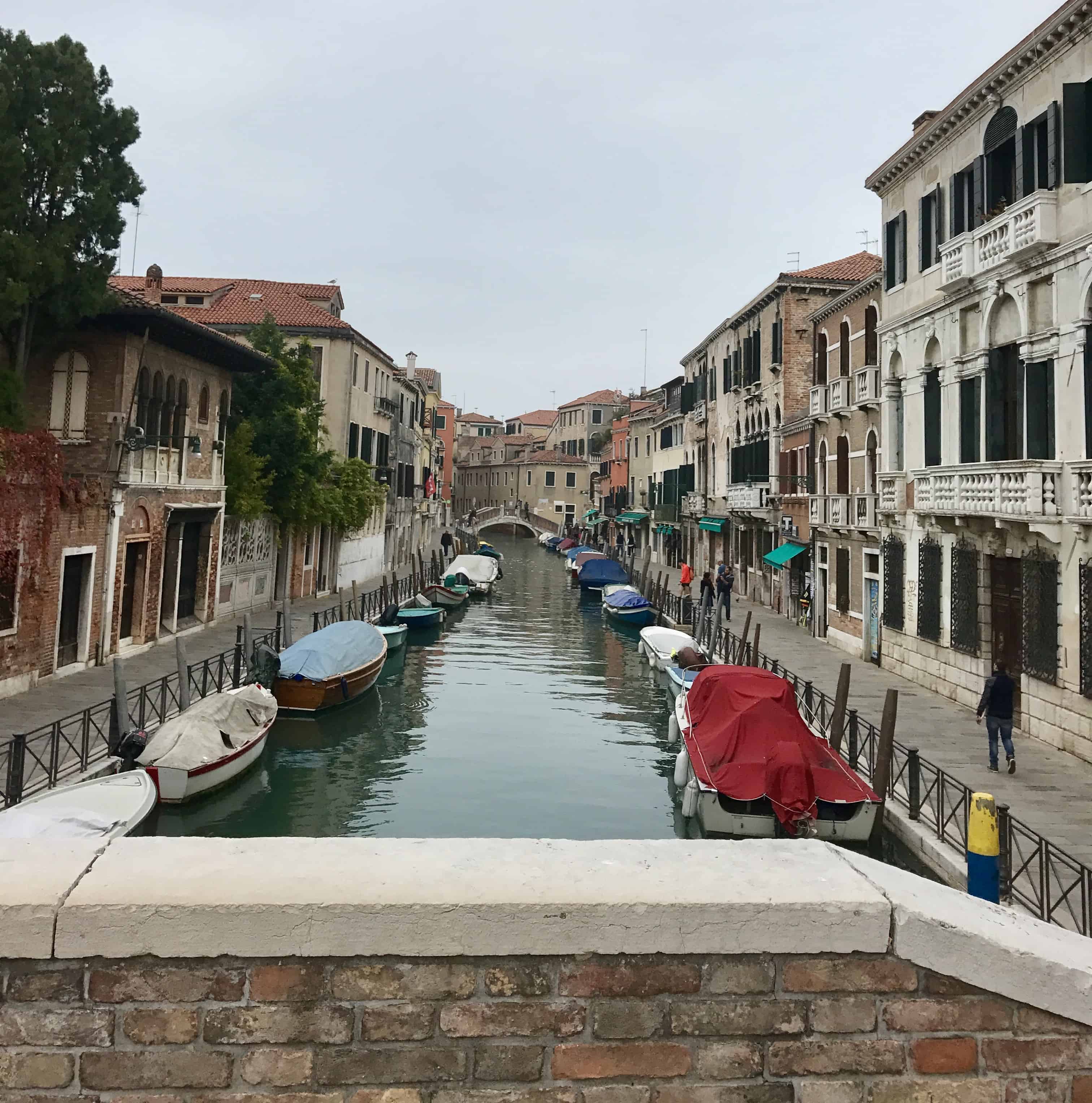 Just across the bridge on the mainland is where San Giuliano Park is and this is where the Venice Marathon expo takes place.  It is inside a big huge fancy tent that is like nothing I have ever experienced in the US.  It has tons of exhibitors, again, most of which I haven’t seen in the US.  Lot’s of compression gear and fuel brands that were new to me.  I was at the Venice Marathon Expo to represent the Skechers Performance Los Angeles Marathon.  I worked there from 10am-8pm Friday and 9am-8pm Saturday.  I got to hang out at the Skechers Performance booth, which was incredible! 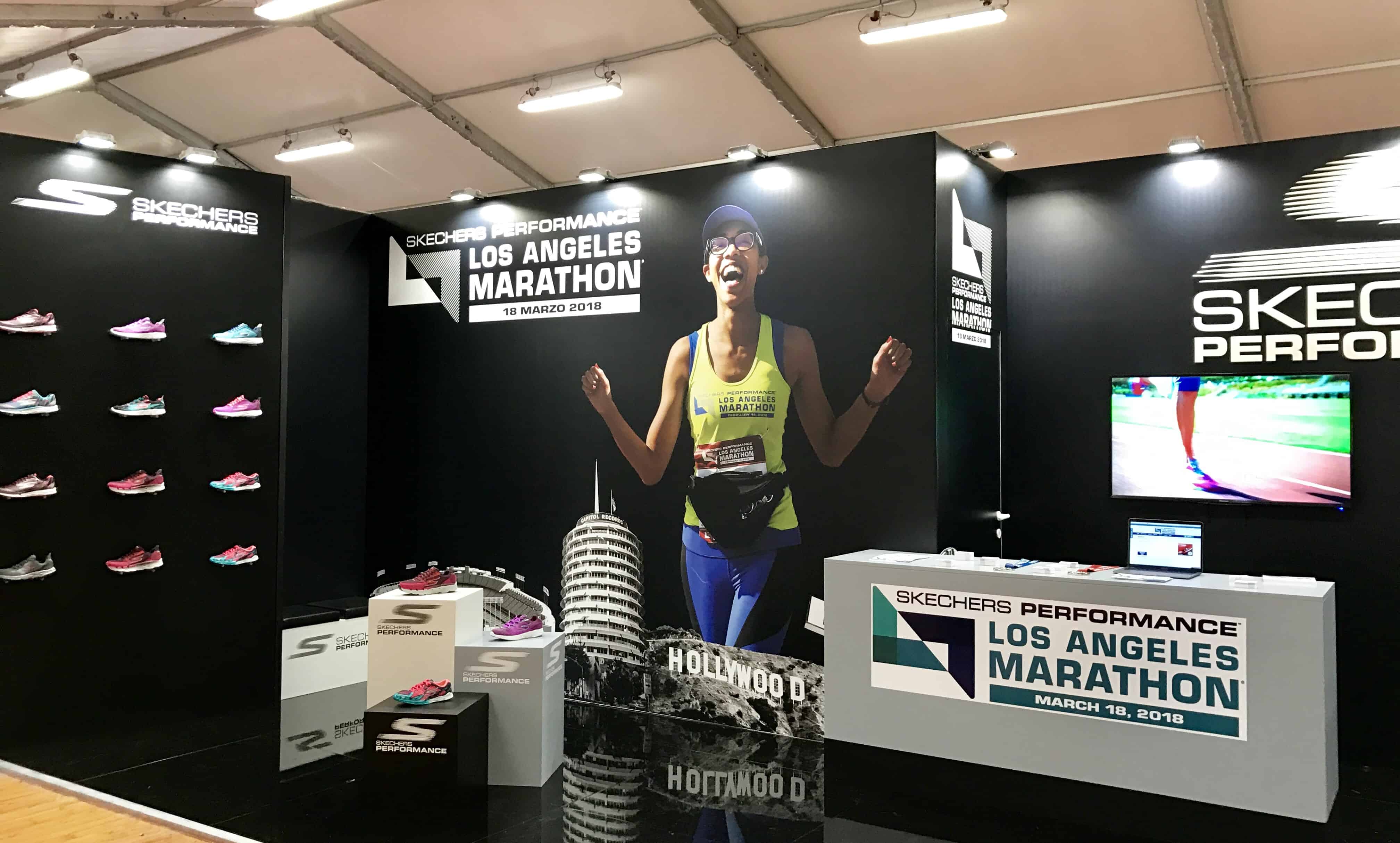 So I don’t speak any Italian at all (well now I know a few words, but I didn’t before the expo).  Growing up in the states I can’t tell you how many times I heard people say that “everyone in Europe speaks English”.  This isn’t true.  With the help of the guys working at the Skechers Performance booth I was able to communicate with most people.  Marco, who heads the Italian division of Skechers Performance, was so helpful and awesome!  I brought a couple of the Los Angles Marathon medals with me and most people were drawn to them because the big medal craze (as in large heavy medals) isn’t something that has hit Europe yet.  The medals and lanyards in Europe are relatively simple in comparison.  I met so many amazing people, some of which even wanted to took pictures with me!  Hopefully I will be seeing some of my new Italian friends at the Los Angeles Marathon in March! 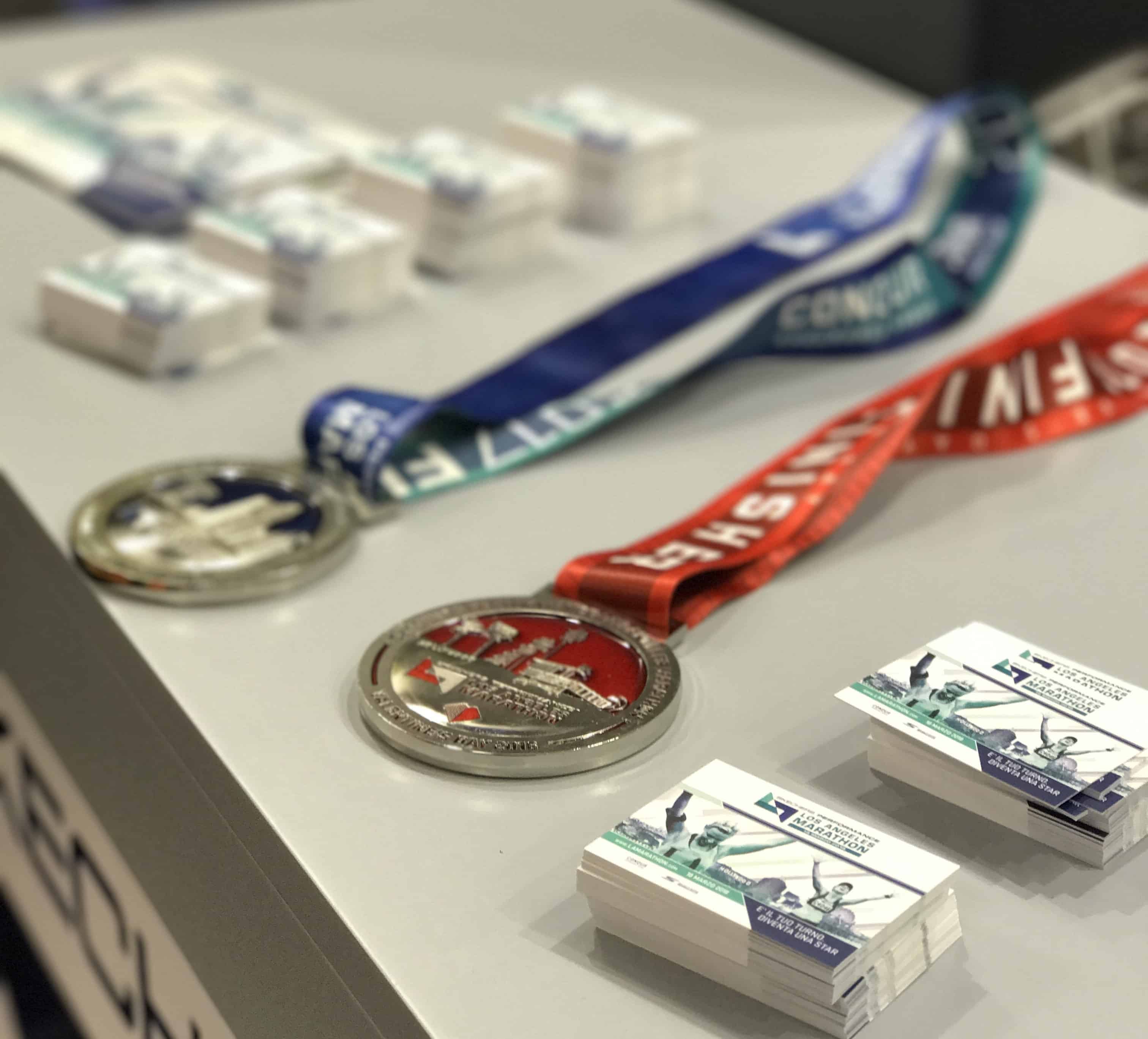 Before and after the expo I would try to fit in as much Venice site seeing as possible since my time there was limited.  The long expo hours of being on my feet, combined with early mornings and late nights of site seeing, mixed with jet leg set me up for some serious exhaustion on marathon day.  I was determined though.  Marathon morning I boarded a bus for the start line.  Again, I need to thank the organizers of the Venice Marathon, especially Mara, who was so helpful with arranging my hotel, my transportation, and answering any questions I had.  While I am at it, also a big huge thank you to Ryan, who works for the Skechers Performance Los Angeles Marathon.  He guided me through everything from making sure my flights were booked, to where to eat, and even to make sure I had wifi! 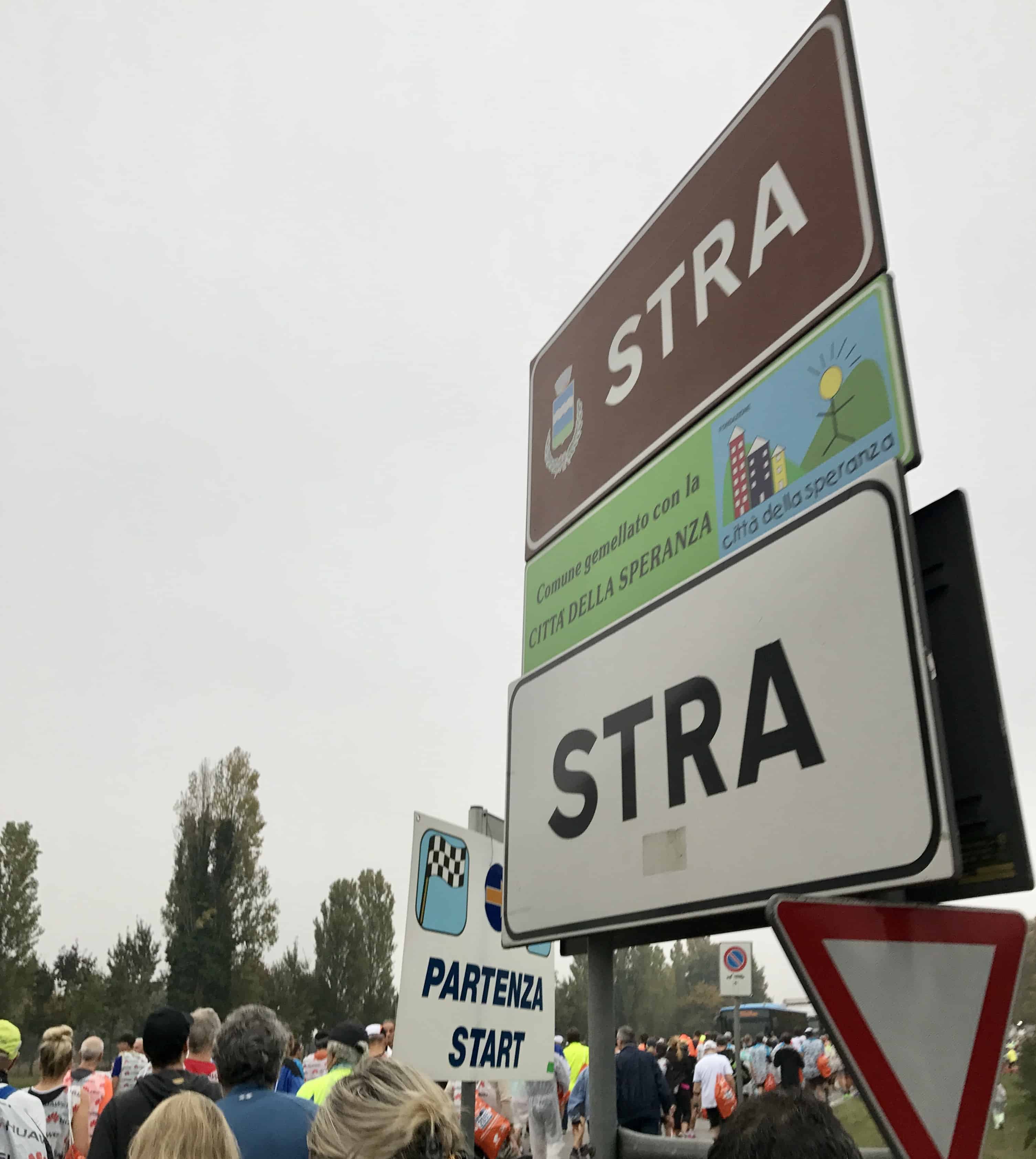 The race actually starts in a little town called Stra.  It isn’t until the final few miles of the race that you cross the bridge to the island of Venice.  At the starting area was a big tent lined with benches inside.  A lot of runners were in there staying warm, chatting it up, and changing (as in nakedness, which was again totally different compared to US races). 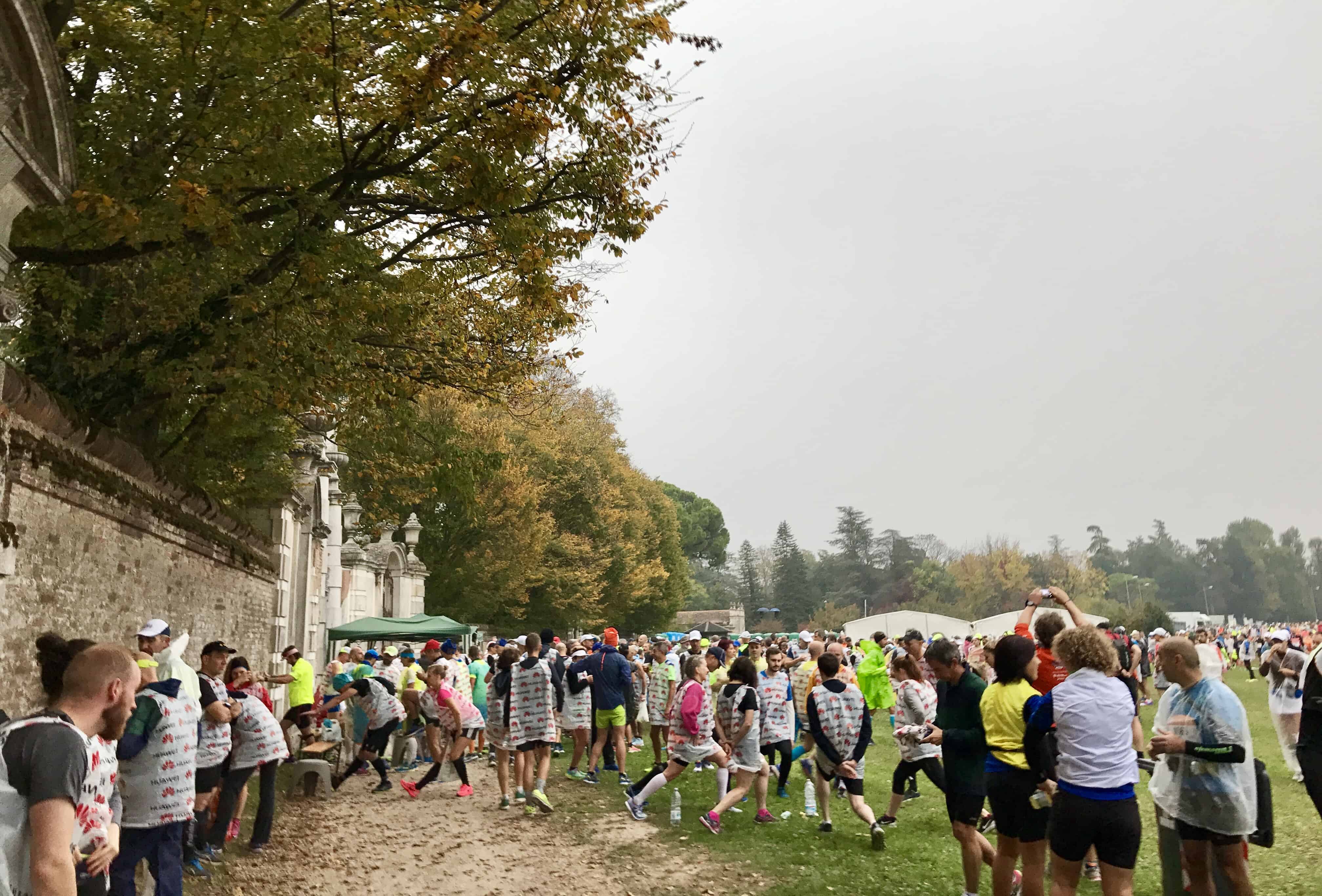 Outside the tent area was a booth handing out some kind of hot beverage.  Still to this day I’m not entirely sure what it was, but it tasted like hot sweet tea.  It was nice to have something warm.  It is in a beer cup and looks like beer, but wasn’t. 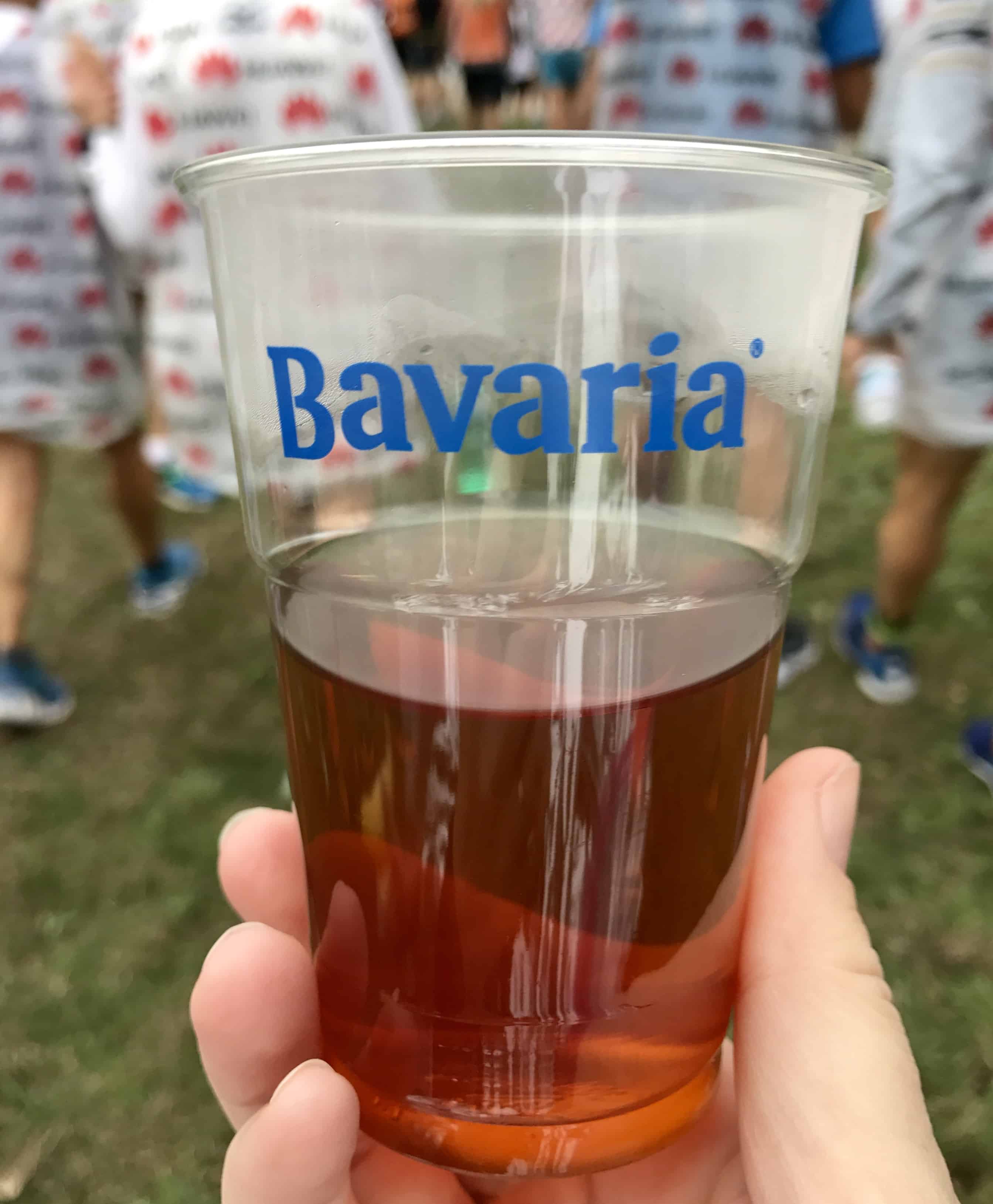 On our bibs was our corral by color.  Unlike some US races though, all corrals go off at the same time.  It is just a way to sort you by pace.  I knew going into the race there were certain time thresholds you had to make.  2:45 was the half cutoff time, the 30k cutoff was 3 hours 50 minutes, and the course maximum was 6 hours.  I was pretty confident I could accomplish this (unless it is a Disney race where I stop 100 times to take pictures).  I planned to start at an 11 min pace.  Holy smokes!  These people are fast!  It was like I was standing still.  I felt like I was one of the very last people out there. 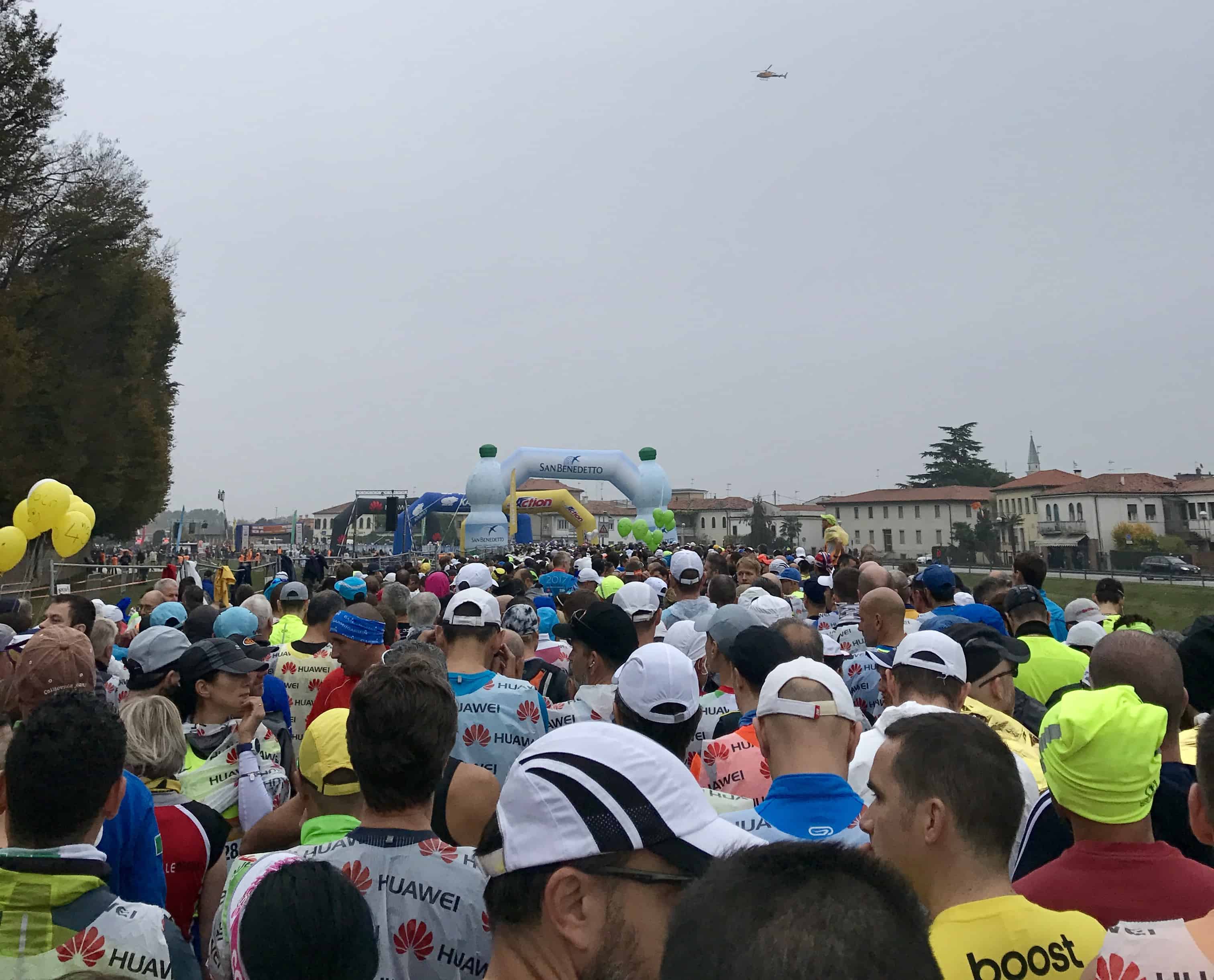 The course took us through some small little towns along the countryside.  There are some fun old estates to look at. It drizzled on us a little along this part of the course, but I was happy it didn’t full on rain the whole time like I thought it might the when looking at the weather the day before.  The first 20 miles of the course were pretty flat.  There are no really big hills on the course except the main bridge to get to the island of Venice and then the ramps up and down all the canal bridges in Venice. 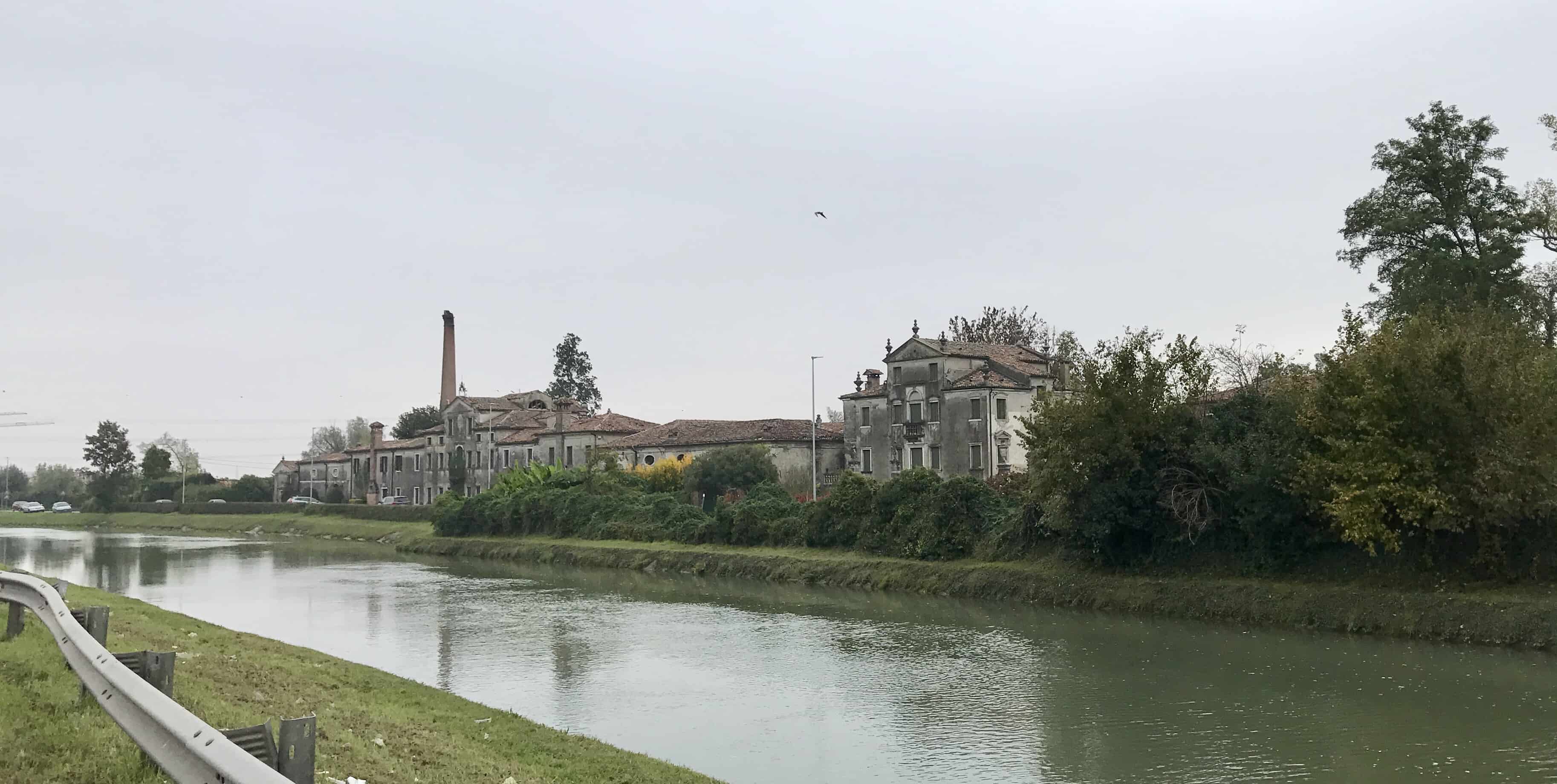 I was so tired it felt like I was running with cement shoes on at certain points.  After the drizzle I got really cold and wrapped myself in a mylar blanket from about mile 9-mile to 18ish.  Along the course the water stops are actually bottles of water!  They hand you an entire full-size bottle of water, no cups. 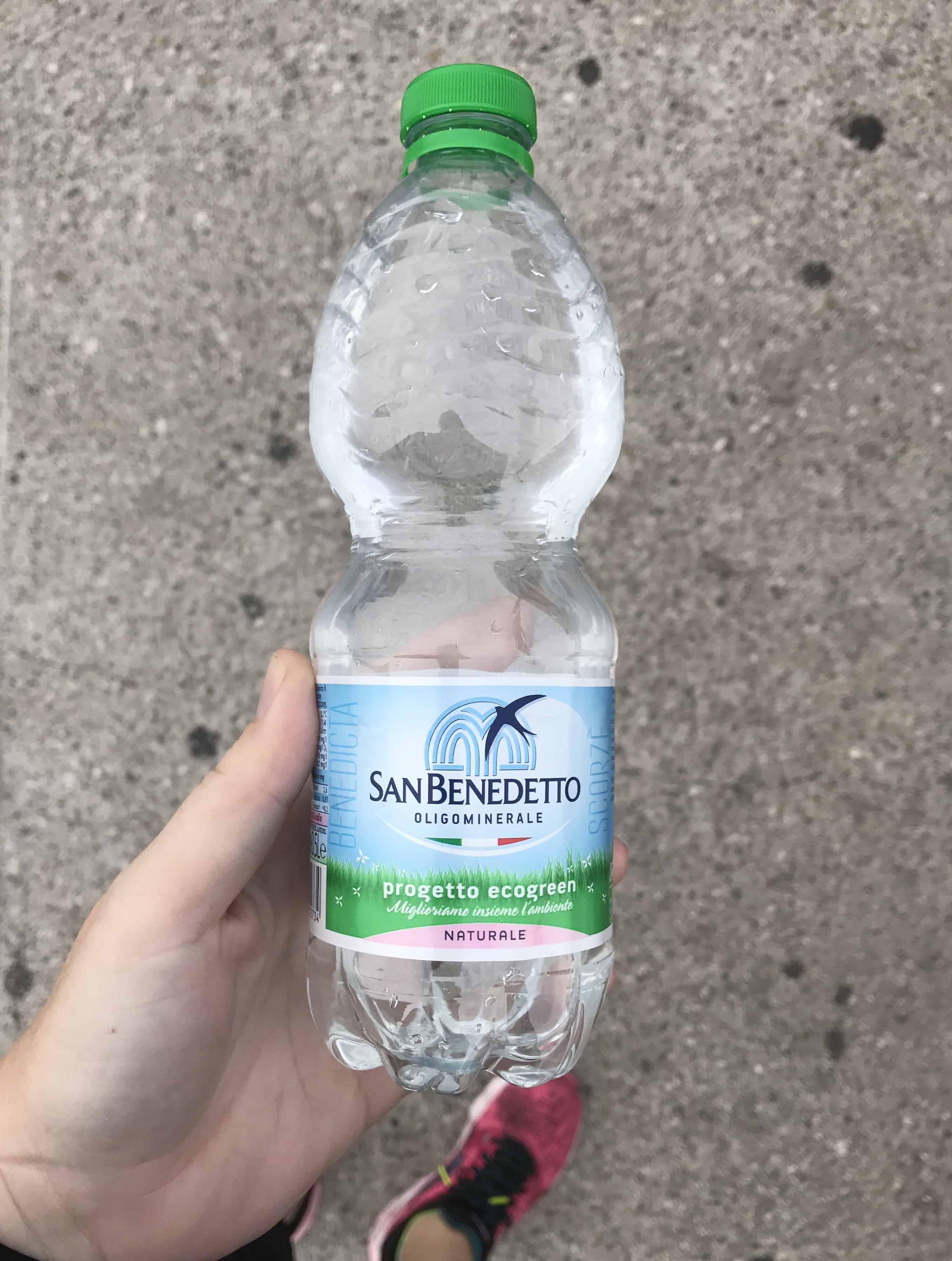 The food along the course was cut up pieces of fruit like banana and oranges and biscuits (cookies).  Another thing to note that is different than any US race, in my swag bag from the expo had these 2 foam squares in them.  They looked like packing foam to me, which is what I assumed it was.  Turns out along the course they have plastic water basins that you can dip your sponges in and wipe yourself with or put on your head etc.  Even if I had figured out what those were and brought them with me I don’t think I would’ve used them though because I’m a germaphobe and dipping sponges in a water tub that thousands of other sweaty people had dipped their same ones into repeatedly creeped me out a little. 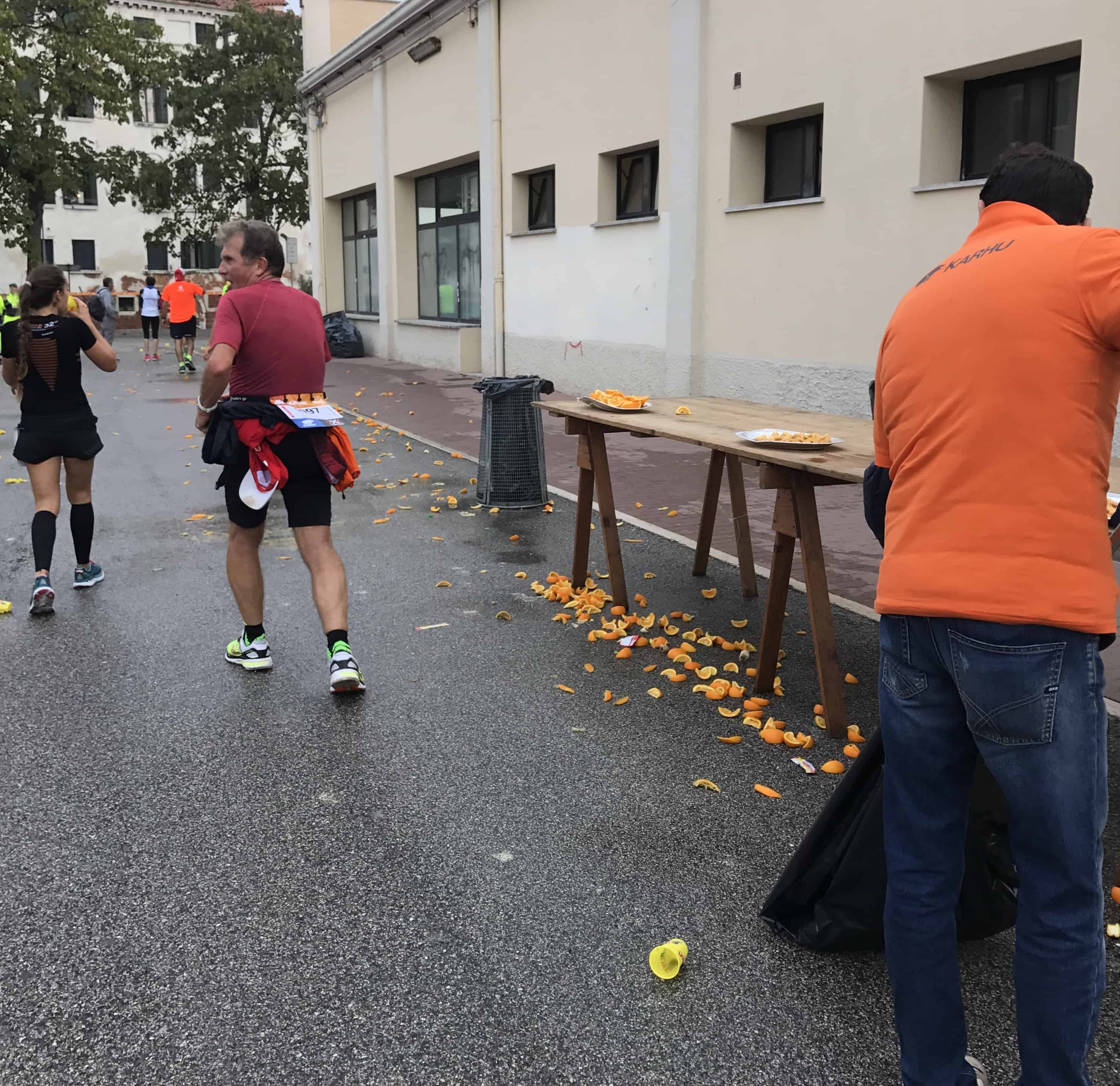 The whole course was beautiful, but once I made it to the island of Venice I was in awe of where I was running.  It was so beautiful, so old, so much history, and people cheering us on in Italian.  I had very little idea of what they were saying, but it felt good to hear them cheering!  On our bibs had a flag of our nationality, so when people saw the American flag on my bib some of them would cheer me on in English which I thought was really cool. 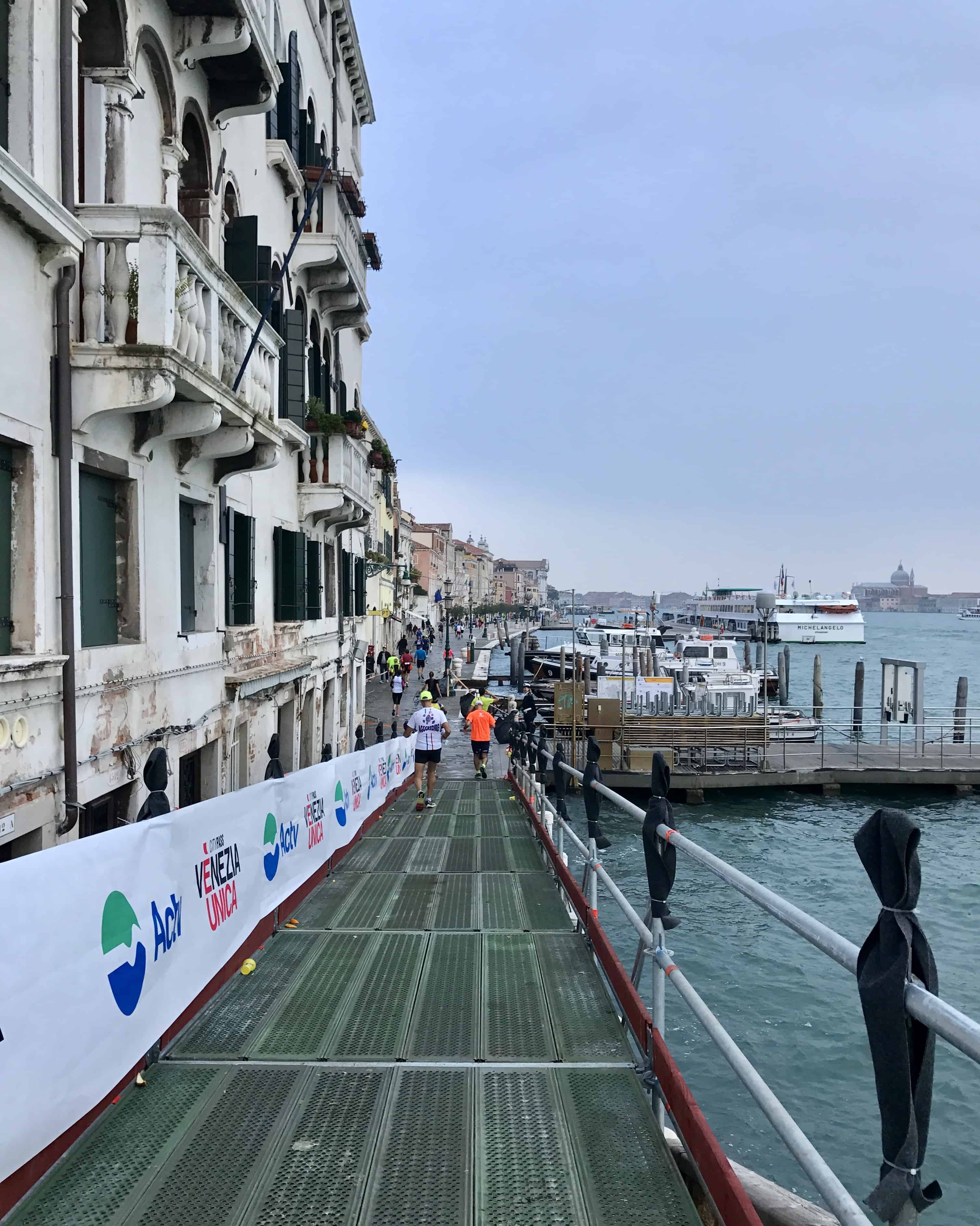 The weather had been foggy but nice all the days leading up to the marathon.  Marathon day was a little windier and the water was pretty choppy.  When running along the water on the island of Venice the waves would splash up on part of the course, so I stuck close to the left side.  I didn’t want wet shoes. 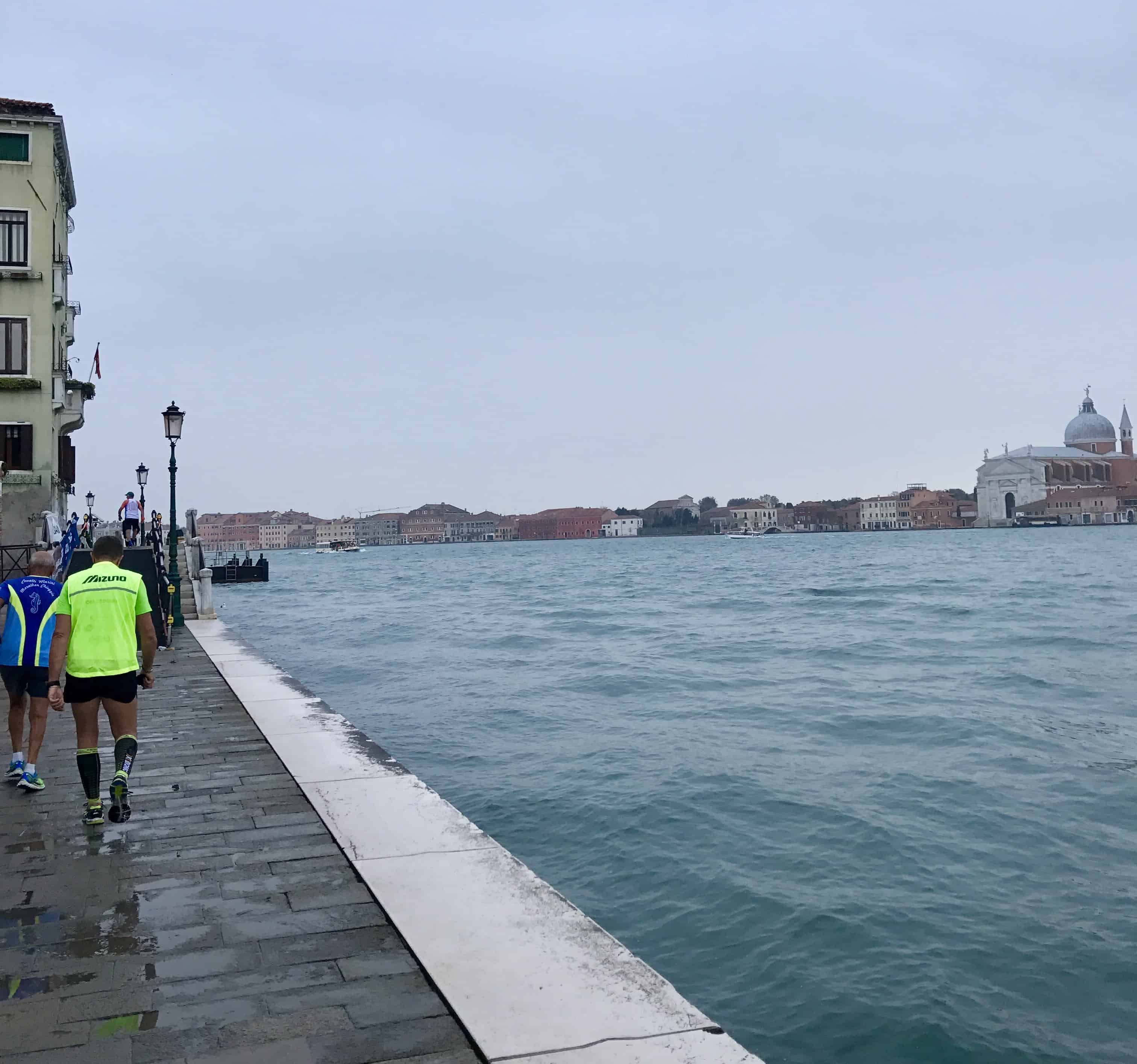 The hard part those last few miles are all the little bridges.  The nice part is they build ramps for the runners to get up and over them and not have to do all the stairs, but it is still hard that late in the race. 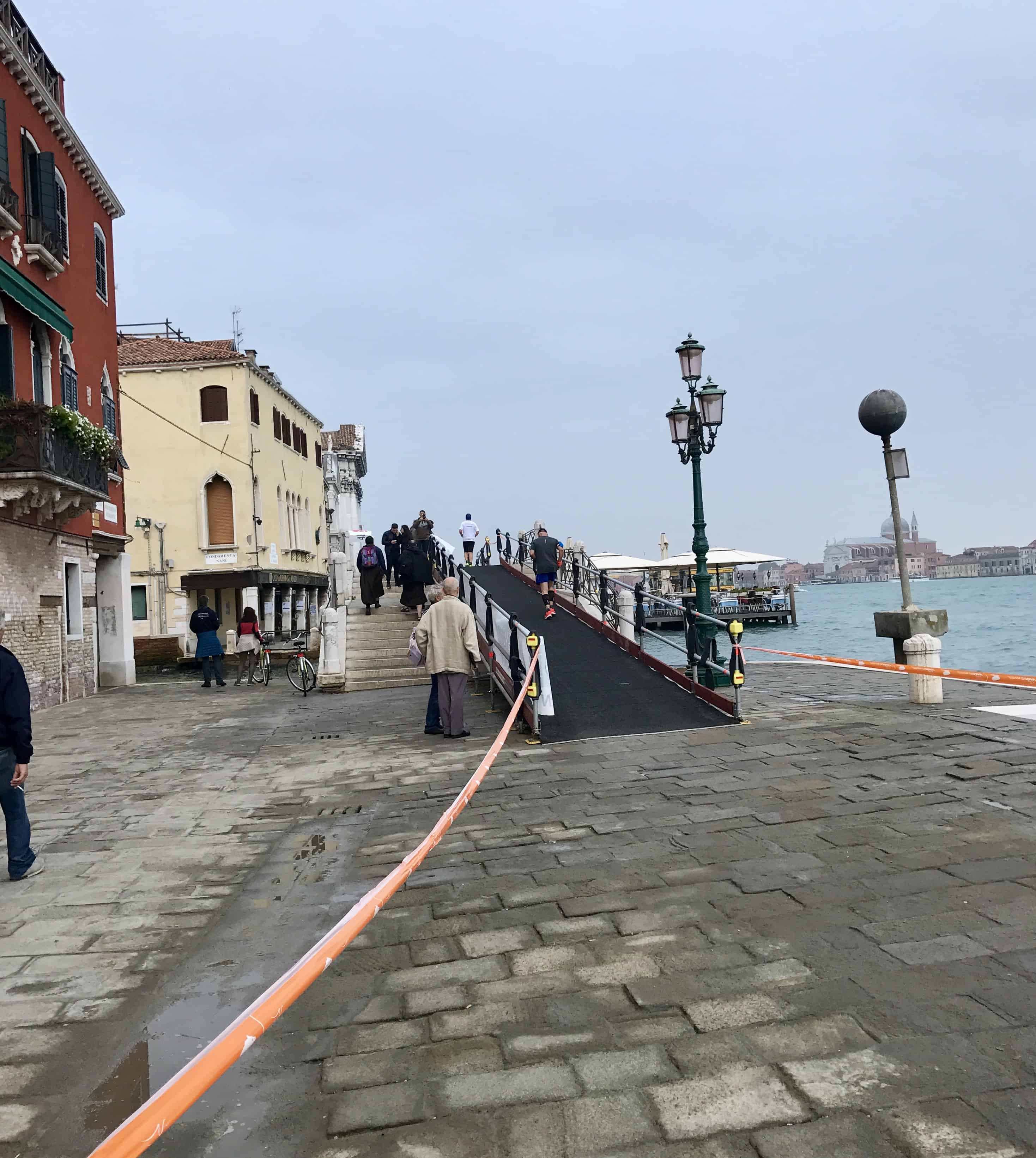 I think my favorite part though was that they build a big pontoon bridge, just for the marathon, that goes across the Grand Canal for the runners to get from one side to the other.  Again, the water was choppy, so the pontoon bridge was a little rocky, but it could also be I was that tired. 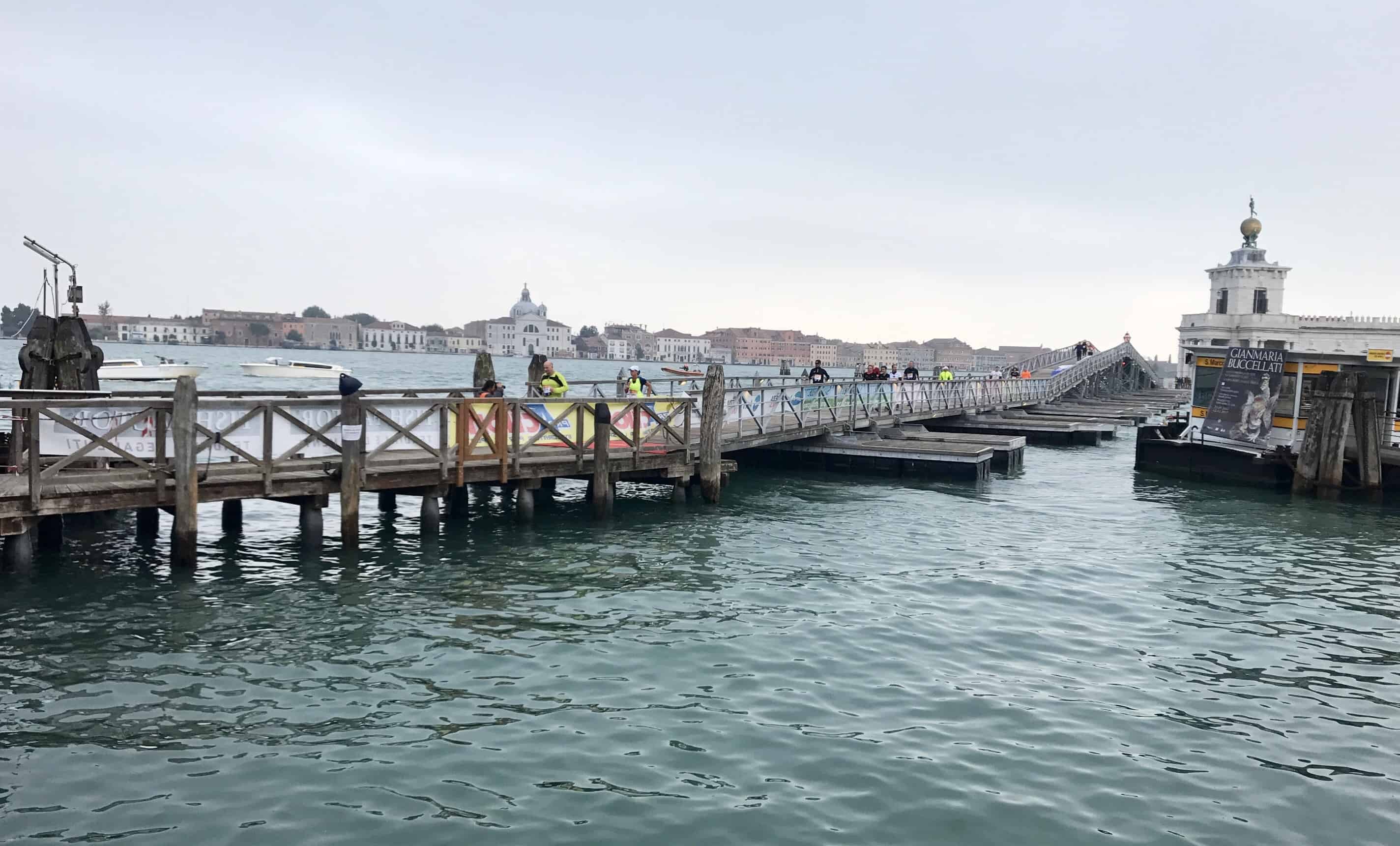 My two amazing friends, Cam and Michelle, that made the trek to Italy to be with me, were on the other side of the pontoon bridge cheering me on.  This was just what I needed.  They managed to snap this great pic of me. 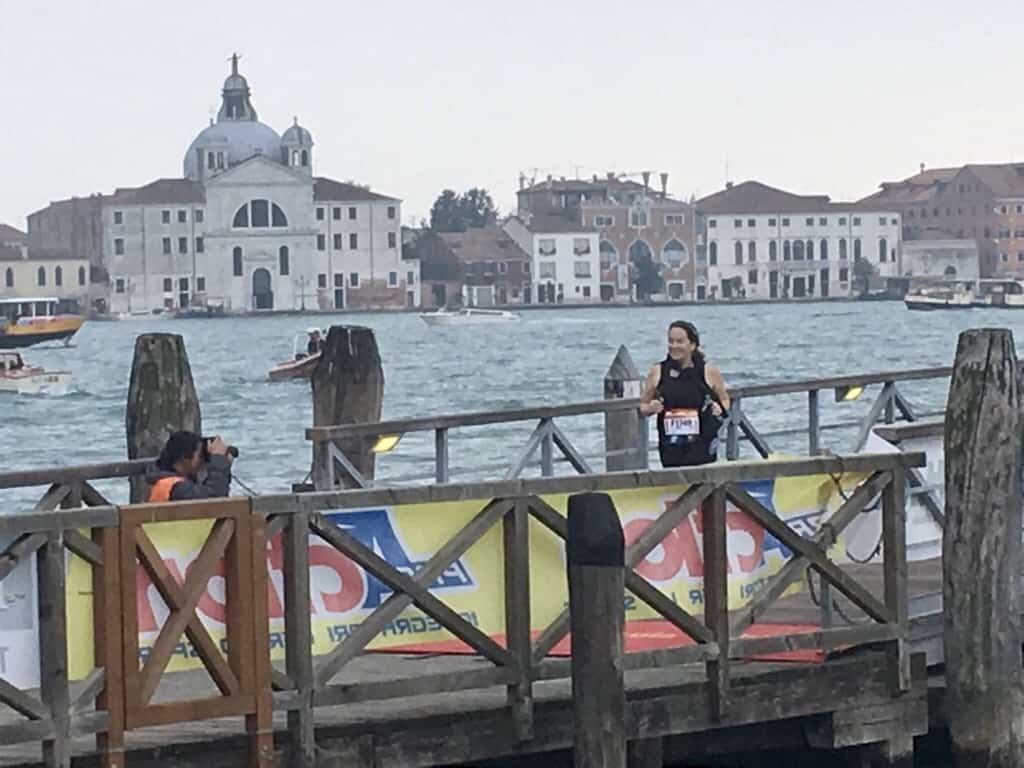 After the pontoon bridge was a quick loop through Piazza San Marco (St. Marcs Square). 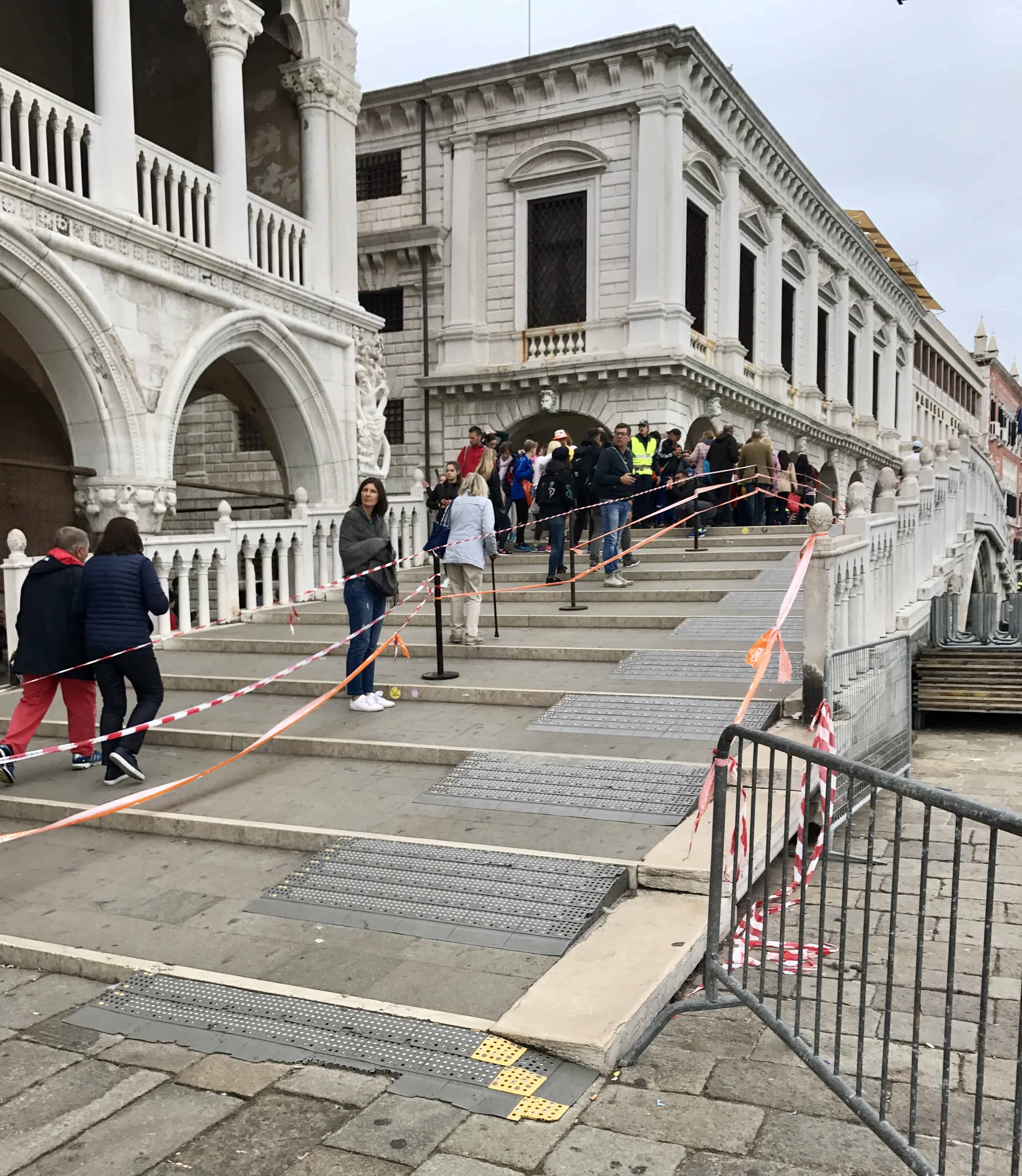 Then up and down ramps over the canal bridges to the finish line. 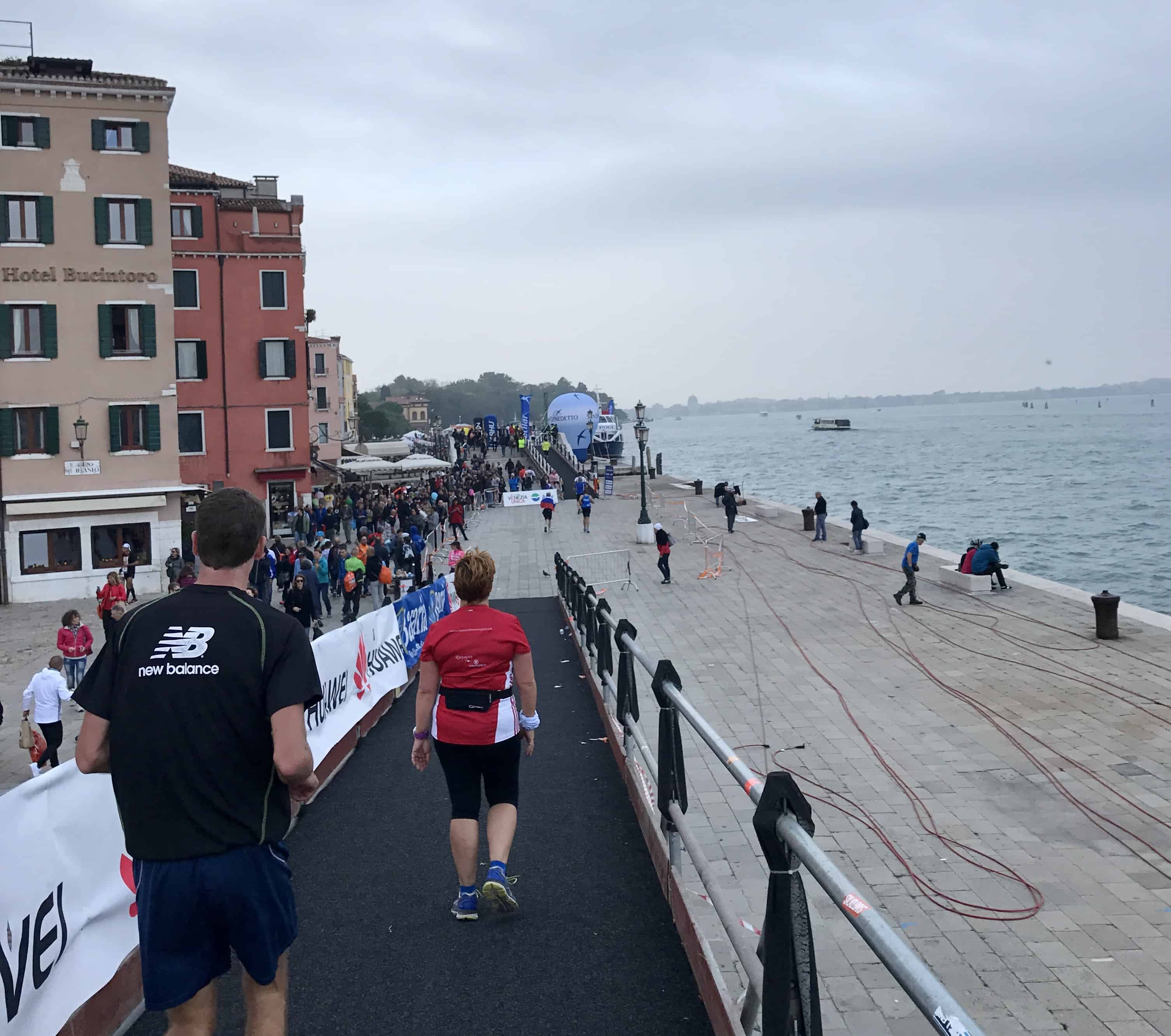 I felt so happy to be done, but also so incredibly blessed to have run somewhere as amazing as Venice.  I finished around 5:25 and felt like a turtle because that is incredibly slow compared to most finishers, but I finished and that is what counts. 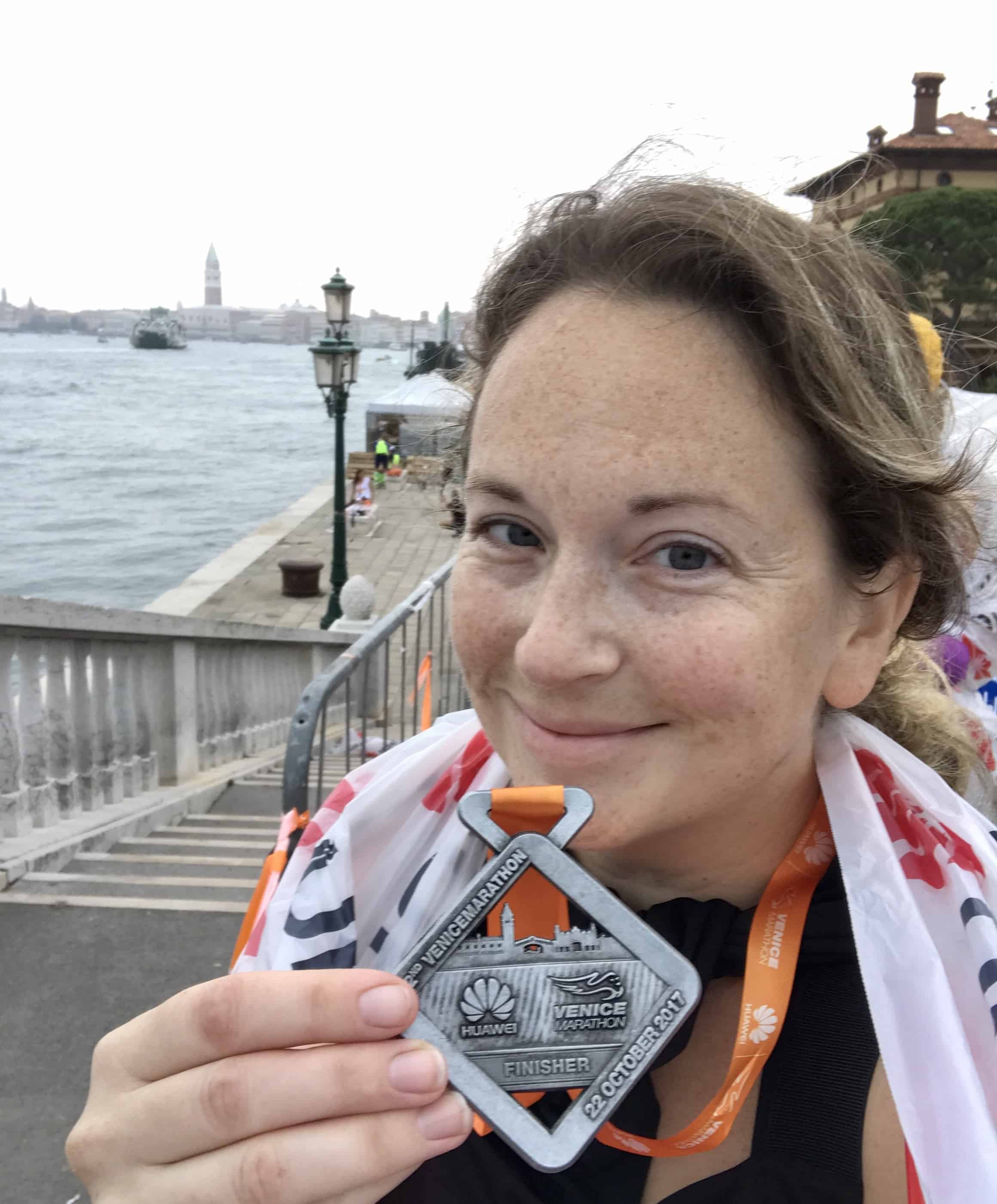 While the Venice Marathon was one of the hardest races of my life, it will always be one of the most memorable and special.  I can’t wait to get to Venice again, hopefully in the not too far off future and take my little monkey.  She would think it is the coolest place ever.  Thank you so everyone who followed along with my journey on social media and for virtually cheering me on!  I felt so much love and support and it was incredible! 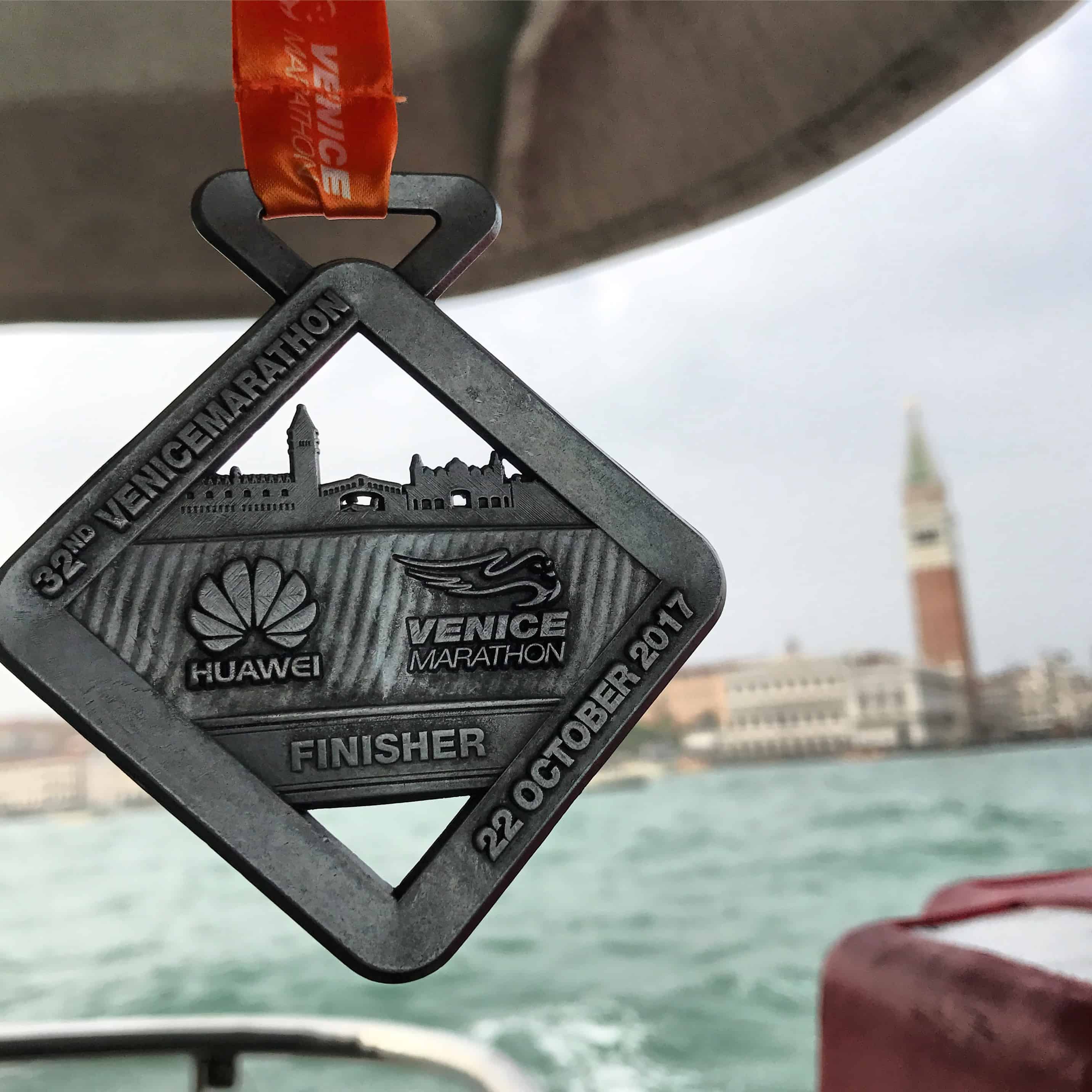 Stay tuned for more about my adventures through Italy. 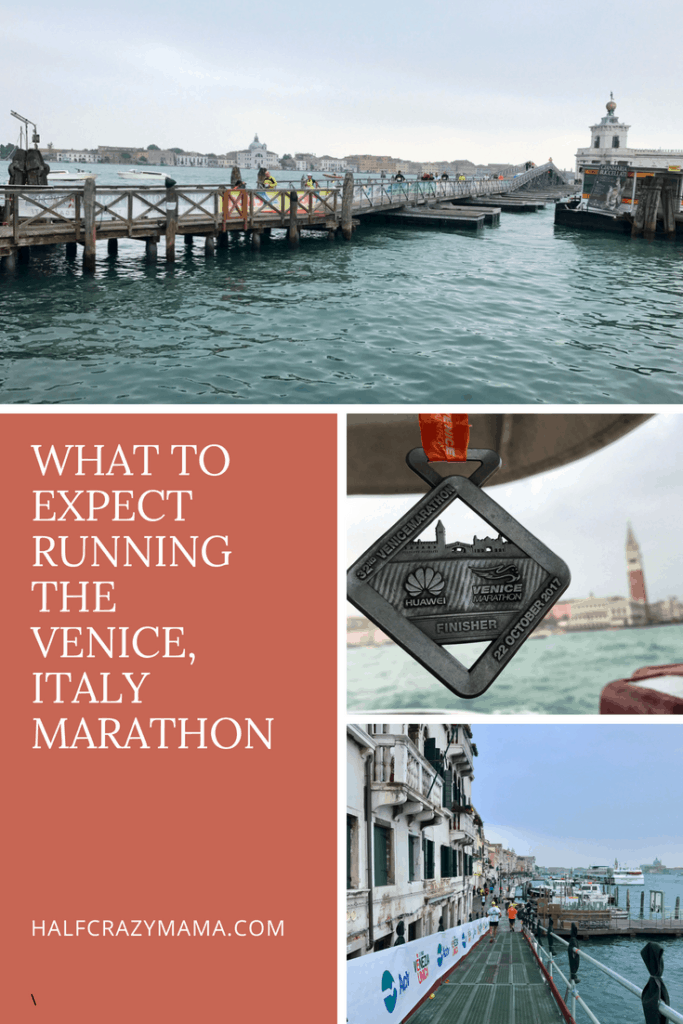