The Disney World Marathon was day 4 of the Dopey Challenge, running 26.2 miles around Disney World to finish up the 48.6 miles and earn all that beautiful race bling! It was a very very cold morning, which isn’t typical Florida.  It was 37 degrees with a cold wind that “made it feel like 25” according to the weather app.  I went to the starting corrals with 3 layers of clothing on, 2 pool towels, 2 mylar blankets, gloves and a poncho!   I had brought this Maleficent dragon hat with me from California thinking it would probably be too hot to wear for a Florida race, but I am so glad I did.  It was fleece lined and just what my cold head needed.  I normally run almost all races in a tank top, so this gives you a very good idea of just how cold it was. 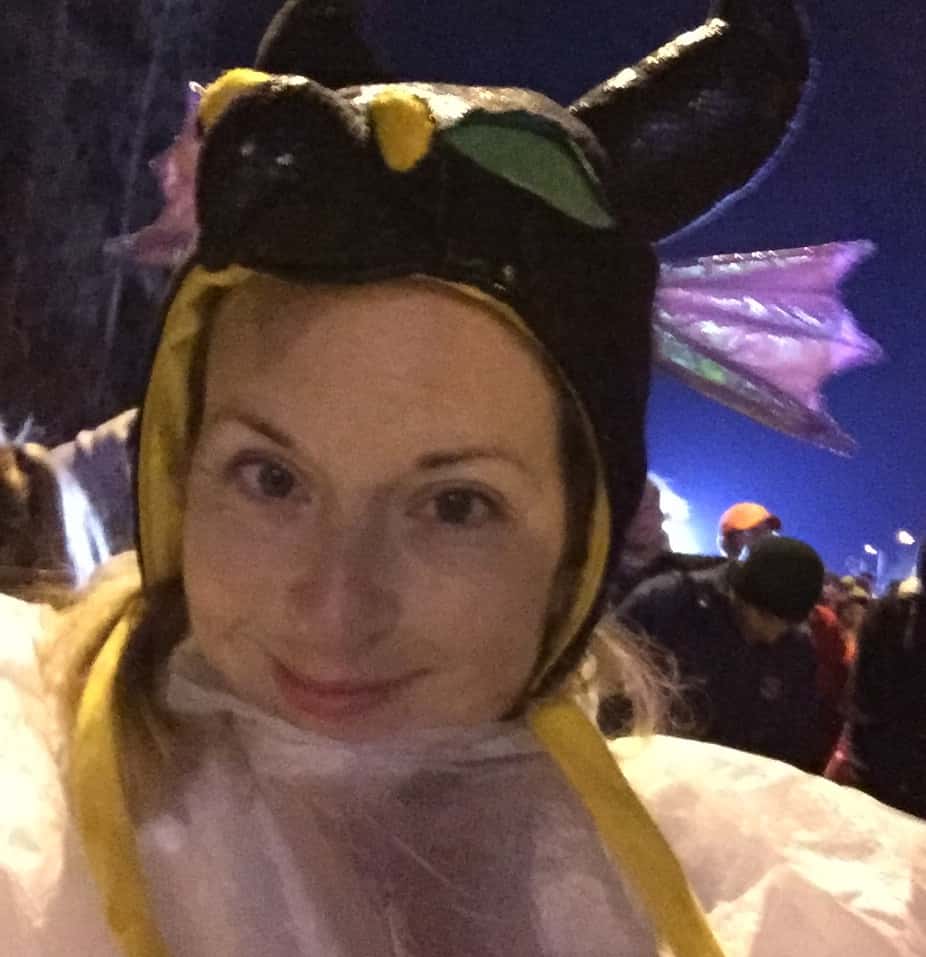 I was just trying to think warm thought while waiting to start in my corral. 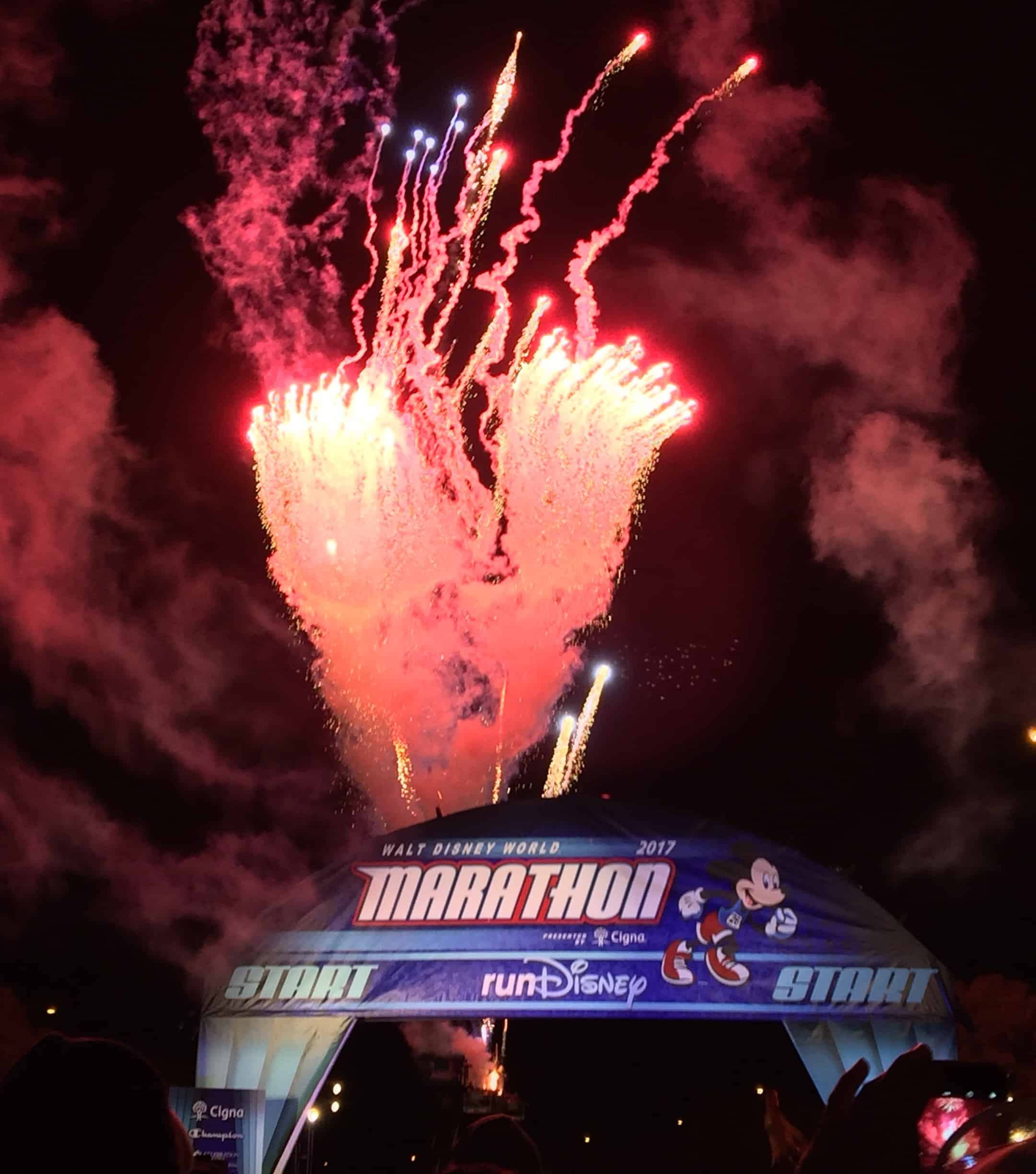 The race starts near Epcot and you make your way to the Magic Kingdom first.  I left the towels and mylar blankets at the starting area, but was so cold that I kept the poncho on until mile 4.5! 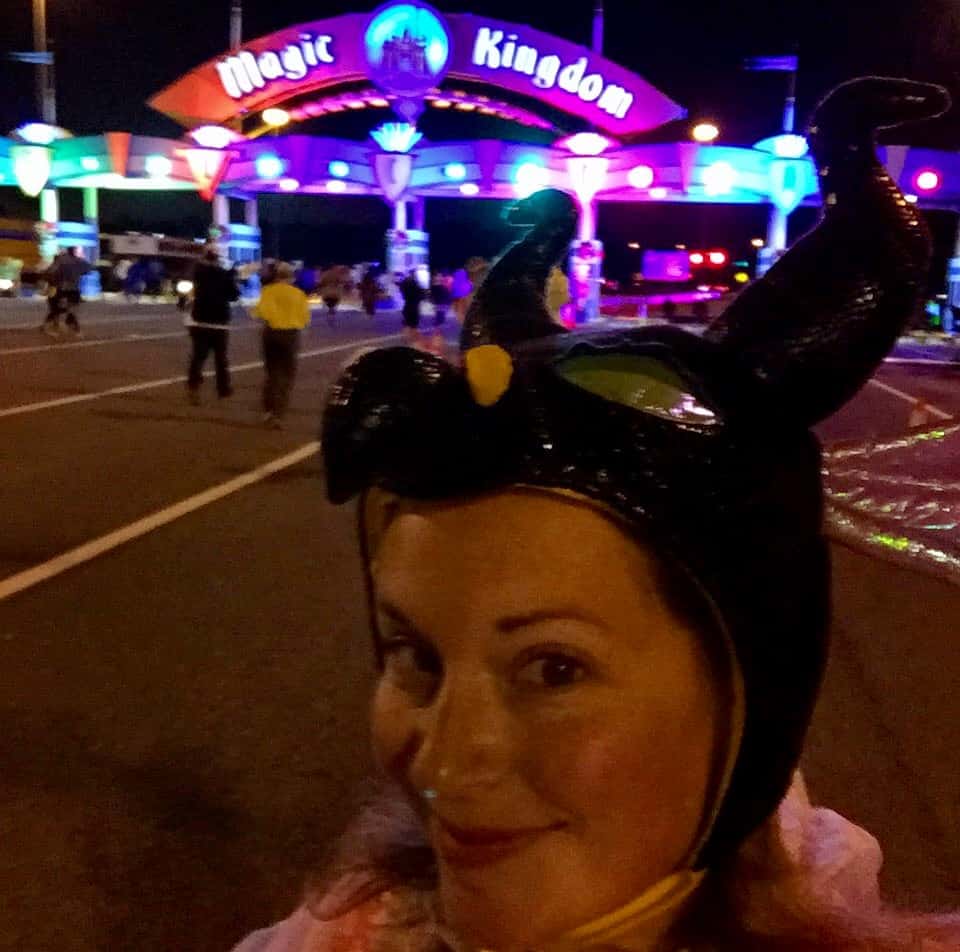 The problem with it being so cold is that once you warm up you don’t want to stop and wait in line for pictures because you will get cold standing there waiting…so I took a bunch of selfies instead. 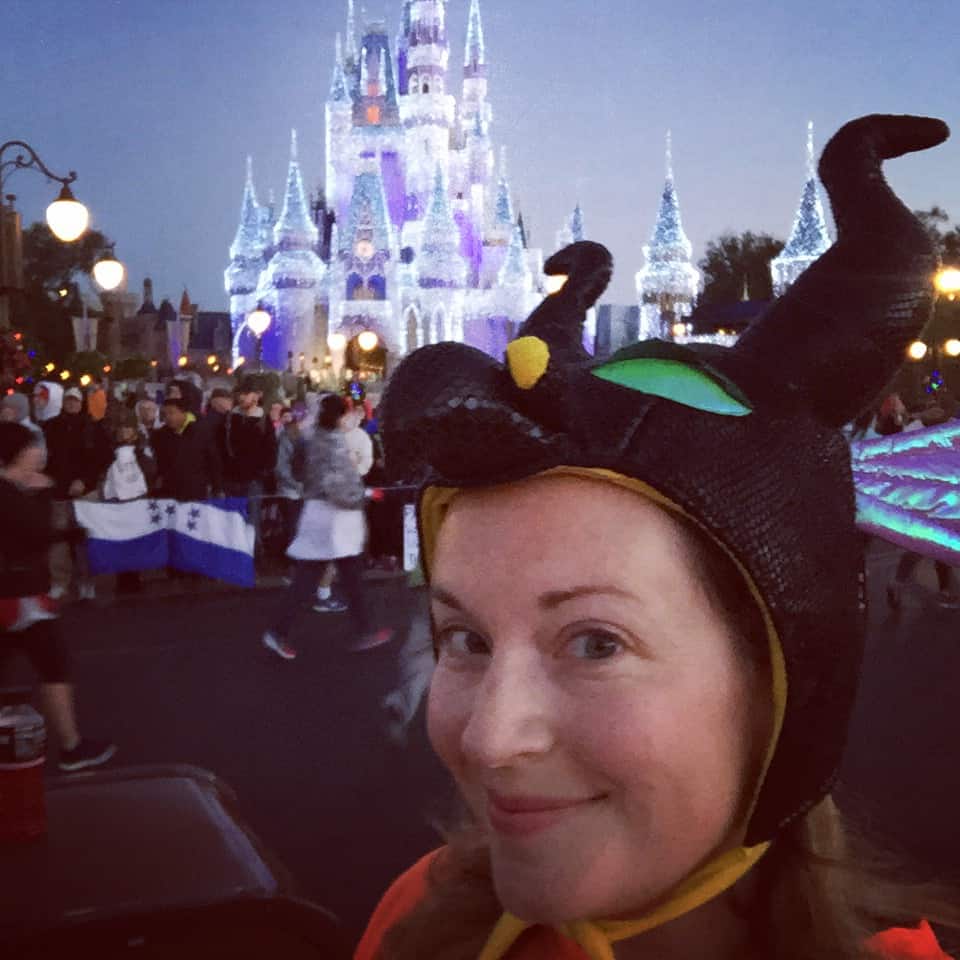 I was excited that the Maleficent dragon parade float was out.  Twinsies! 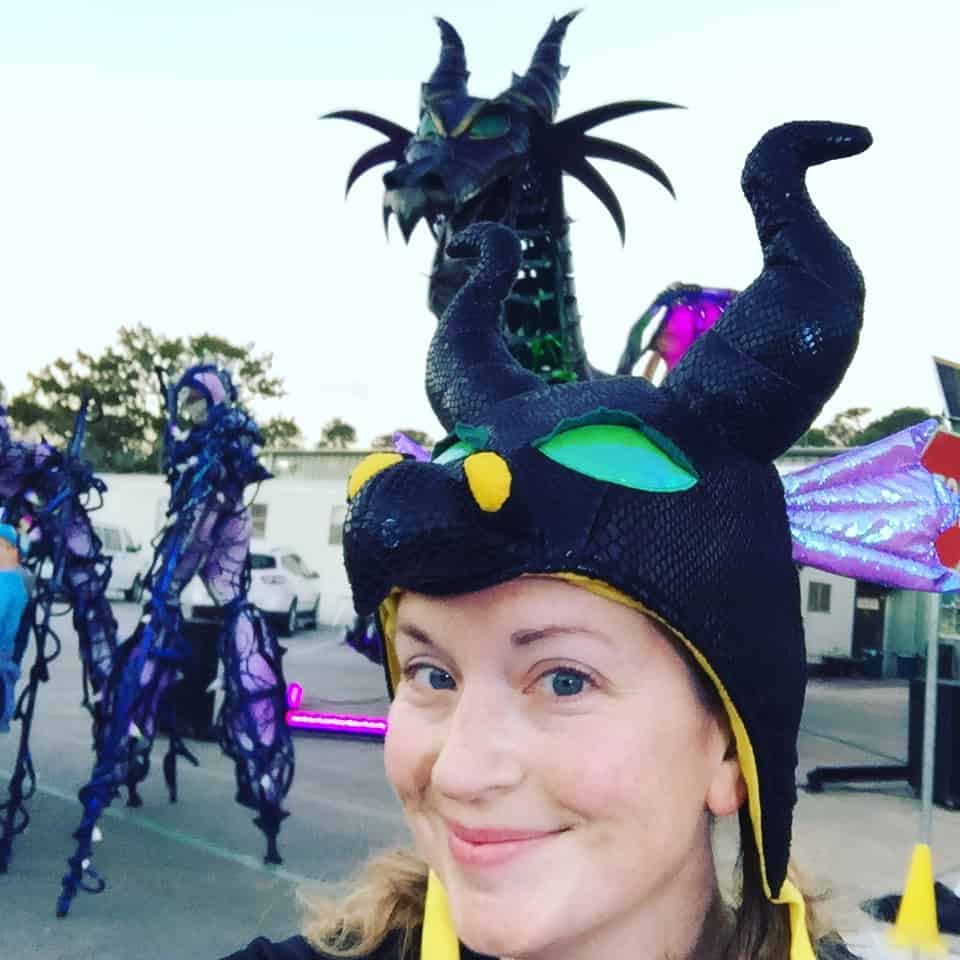 While running between the Magic Kingdom and Animal Kingdom you cover a lot of miles on roads.  There were randomly 2 REAL raccoons out next to the road.  Odd considering it was daylight. 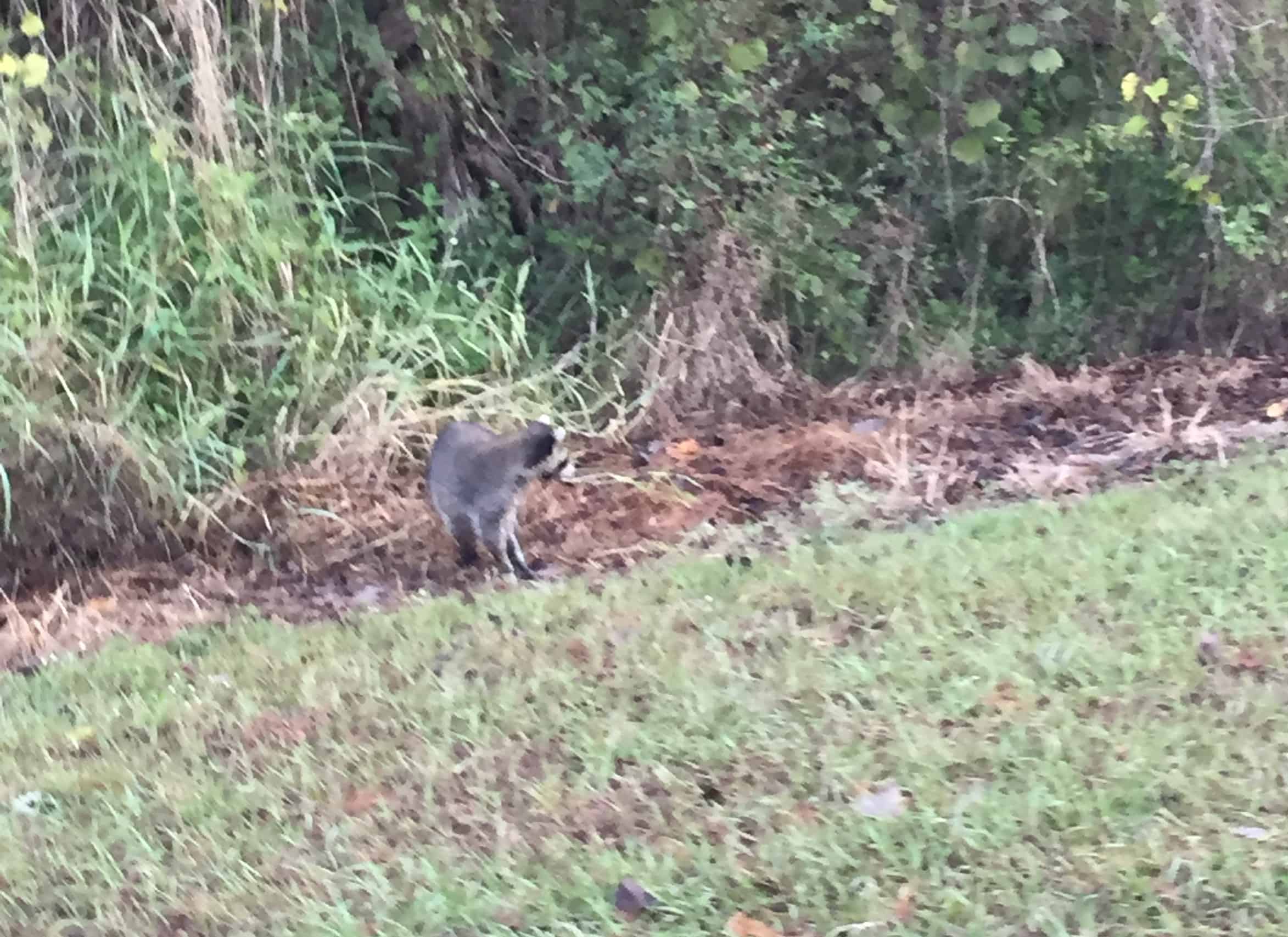 Just past the raccoons the Big Bad Wolf was out.  (The character, not a real one, just to clarify) 🙂 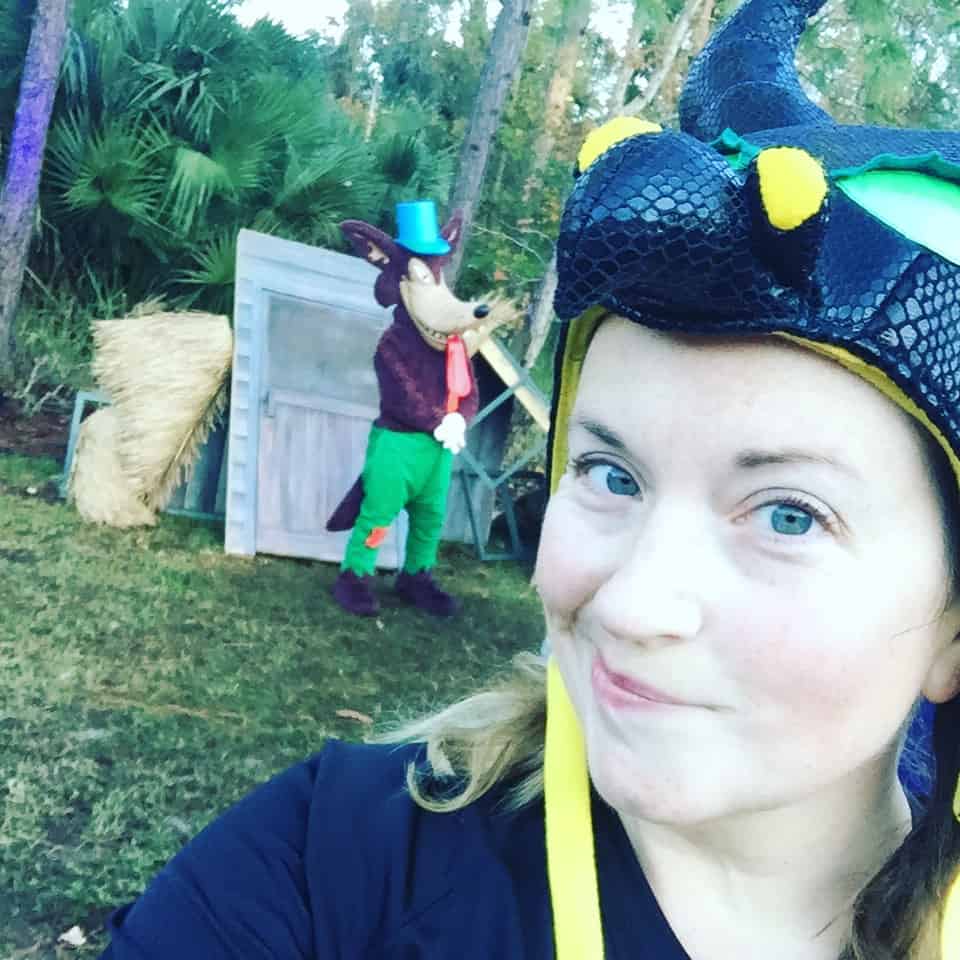 It is fun to enter Animal Kingdom because the caretakers have a lot of the animals out to meet and greet.  Not the safari animals, more like the petting zoo animals.  Once I entered the park through the backstage area I found Timon. 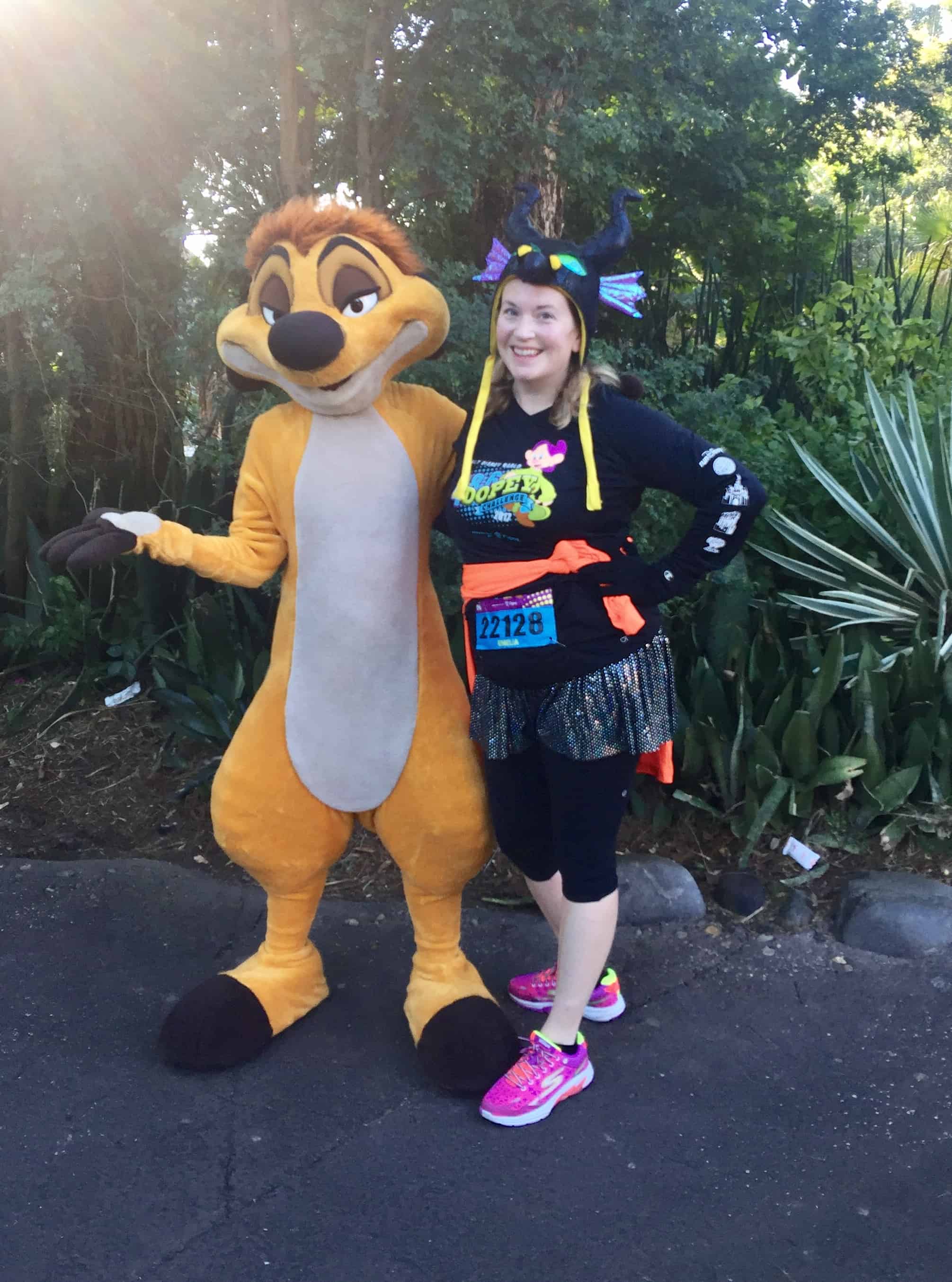 Not far away was the Tree of Life.  The sun was out, but it was still really cold. 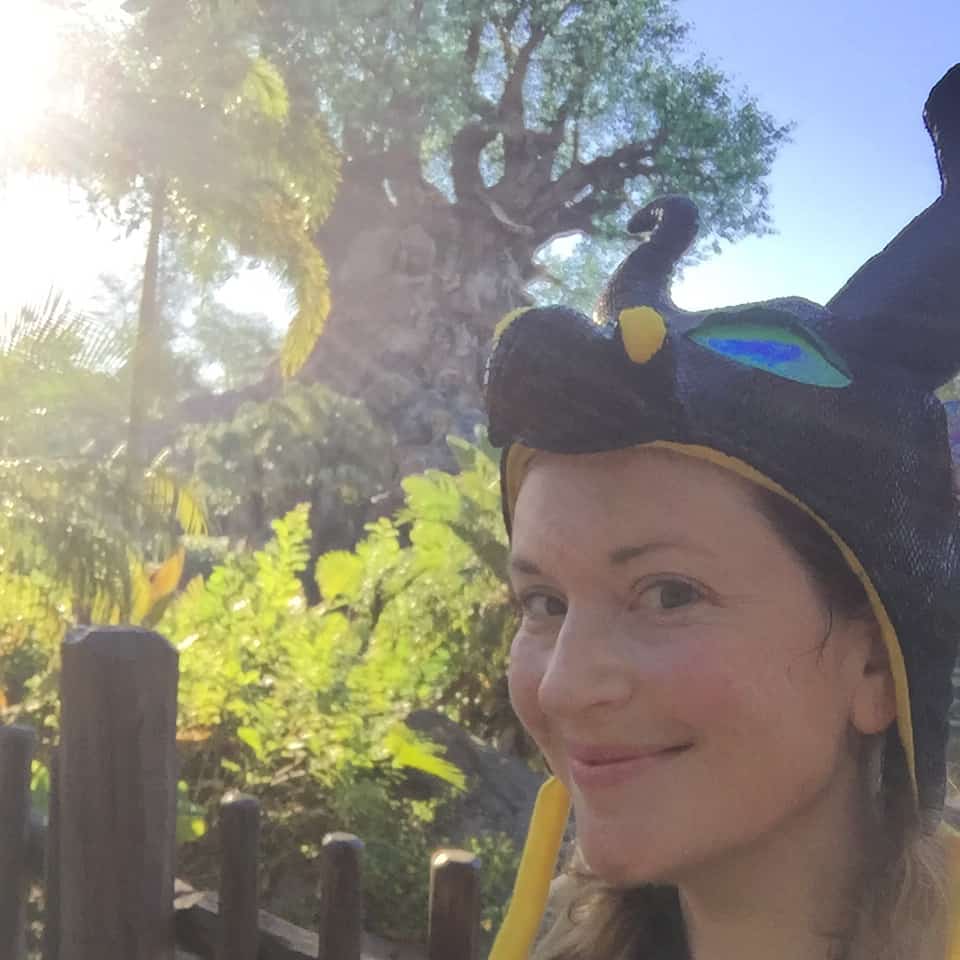 King Louis was also out. 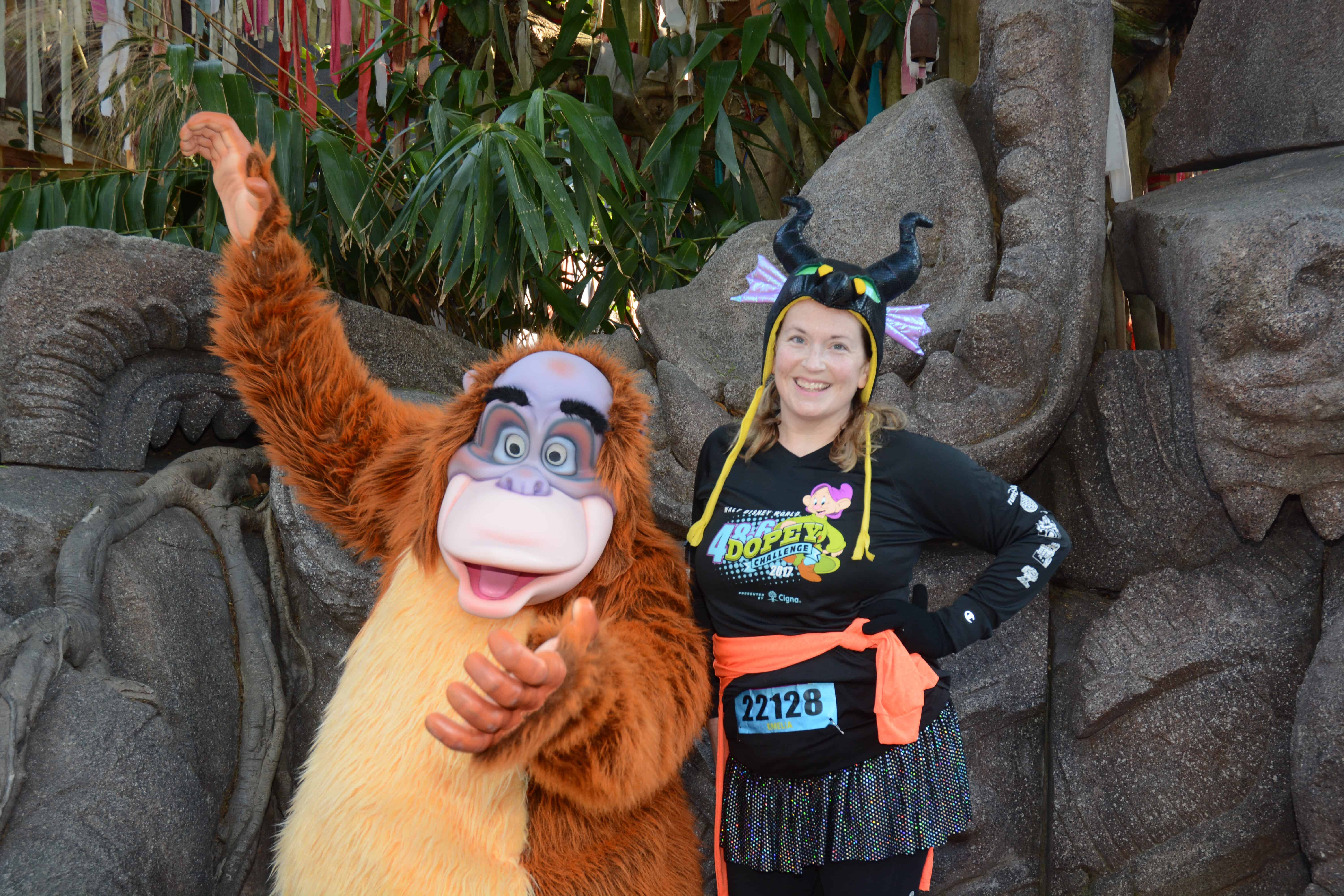 One of my favorite parks about the Disney World Marathon is the tradition of riding Expedition Everest along the way.  If you have enough time you can make this happen.  The ride operators are super good about getting the runners loaded and off loaded quickly. 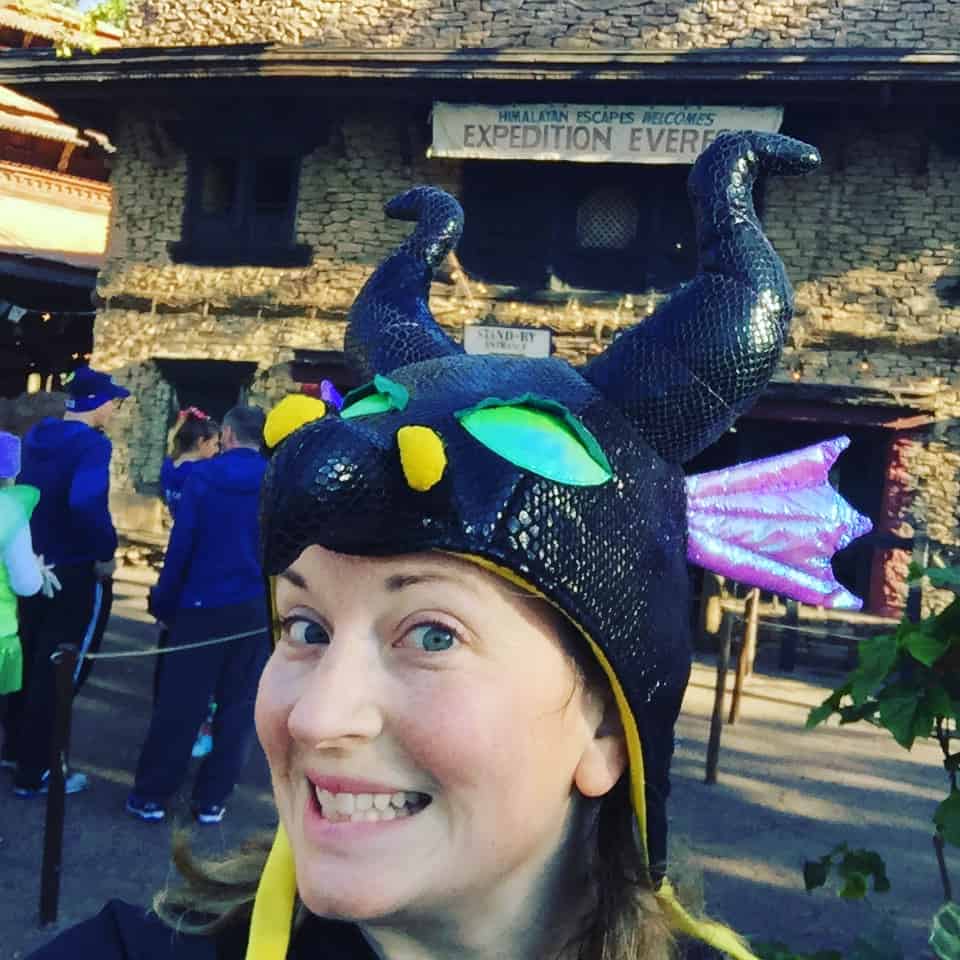 After leaving Animal Kingdom you run to ESPN Wide World of Sports.  This year they had sports themed fab 5 characters out.  Minnie, Mickey, Goofy and even Chip and Dale were out, but the lines for them were pretty long and once again I was getting cold easily when I would stop, so I just kept going.  Sadness and Joy from Inside Out were there too which was fun to see.  After leaving ESPN you run to Hollywood Studios.  They had fun characters out there like Oswald. 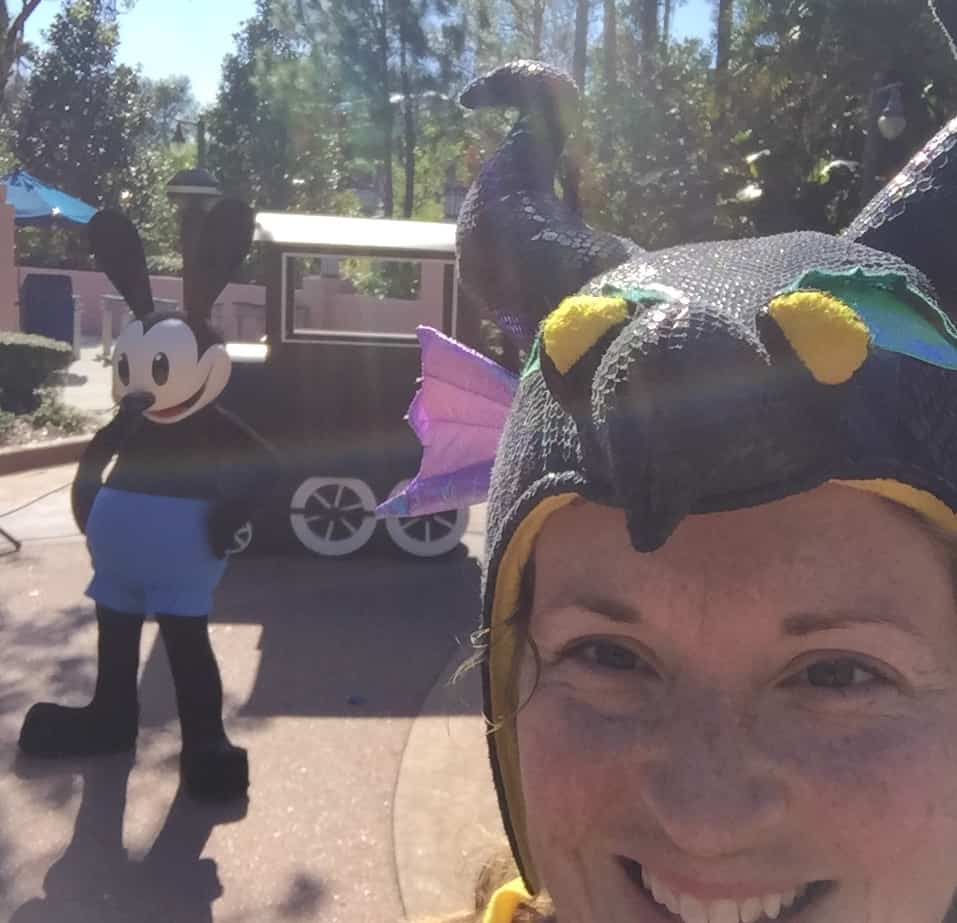 One of the things I always look forward to every year running the Disney World Marathon is the chocolate they hand out backstage at Hollywood Studios to runners.  That sugar hits the spot around mile 22. 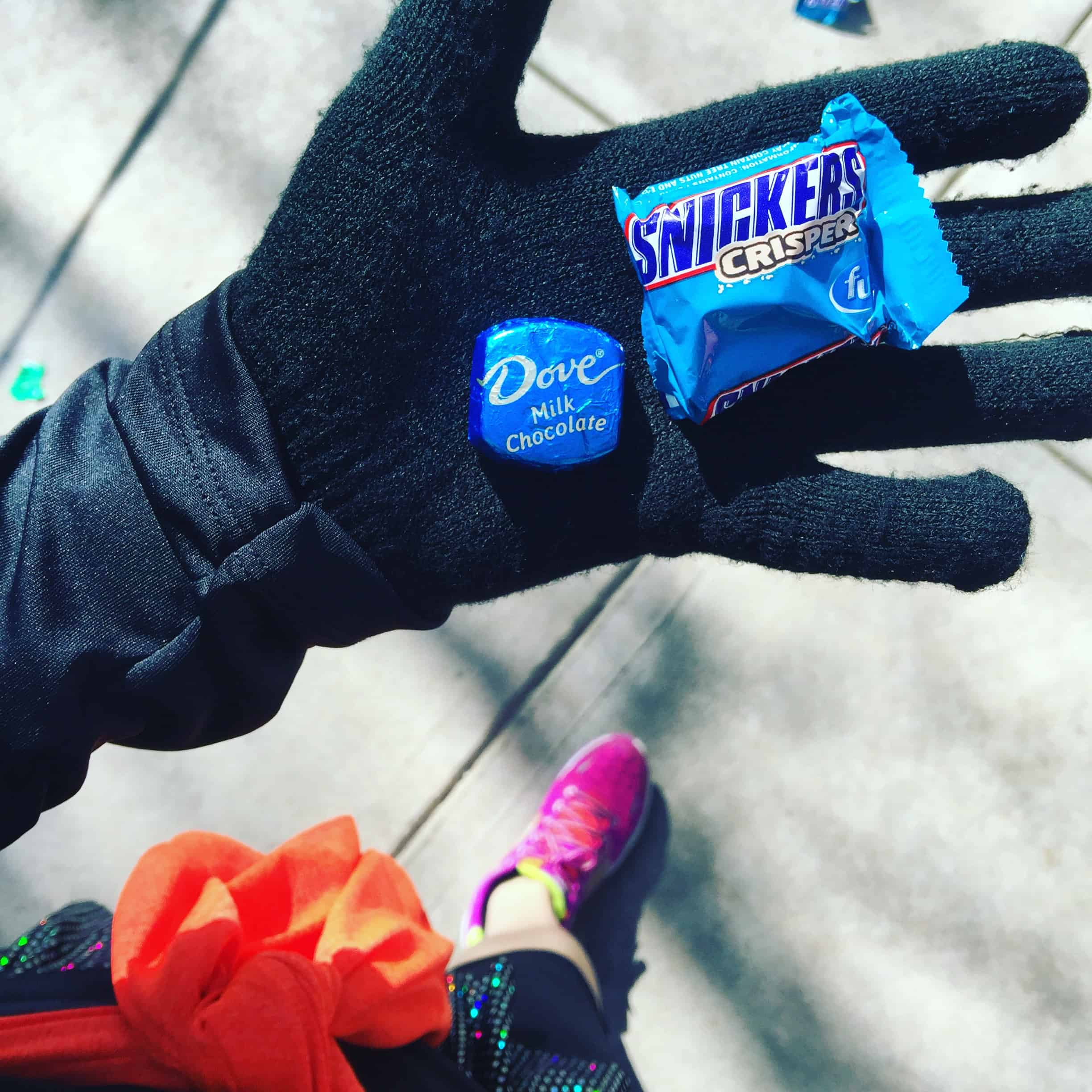 Out of all the characters I ran into though I think these were my favorite at mile 25.5!  My family was in Epcot waiting to cheer me on! 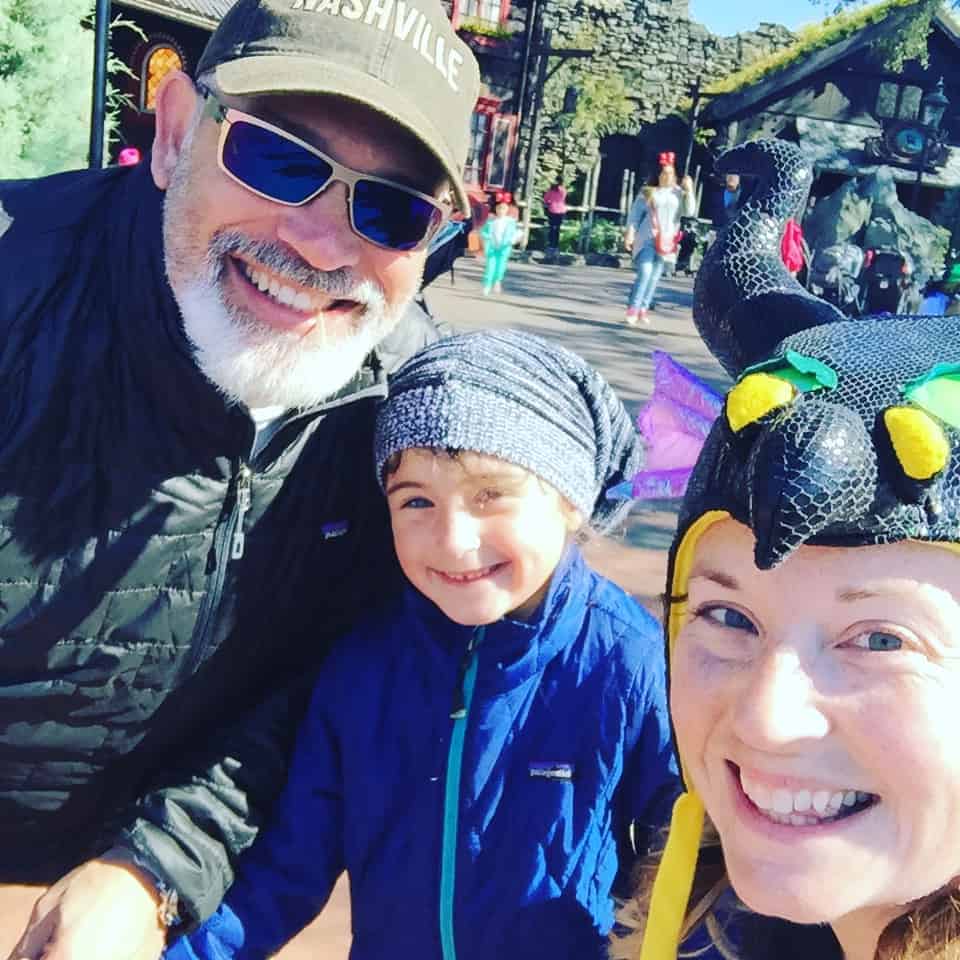 It’t not a runDisney race without an Epcot Spaceship Earth selfie! 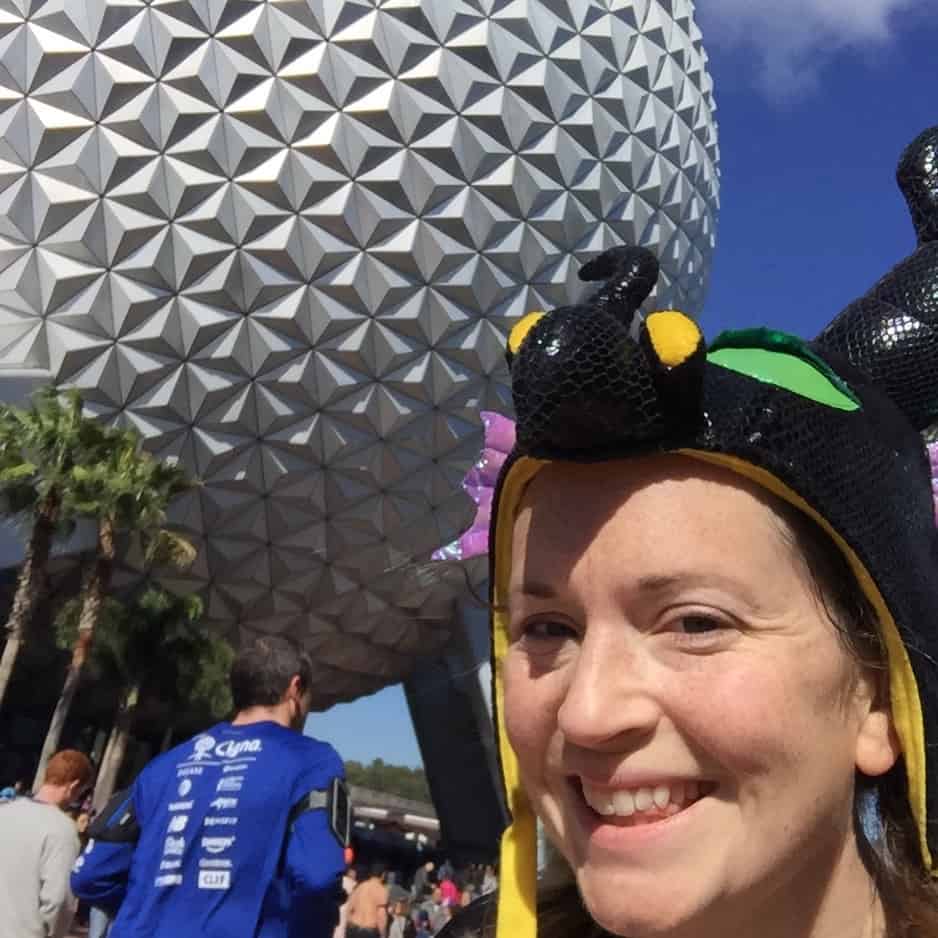 I was really happy to get to the finish line.  After being cold for a long time, a hot shower sounded like heaven.  I never take great race photos.  I always look a little odd I think. 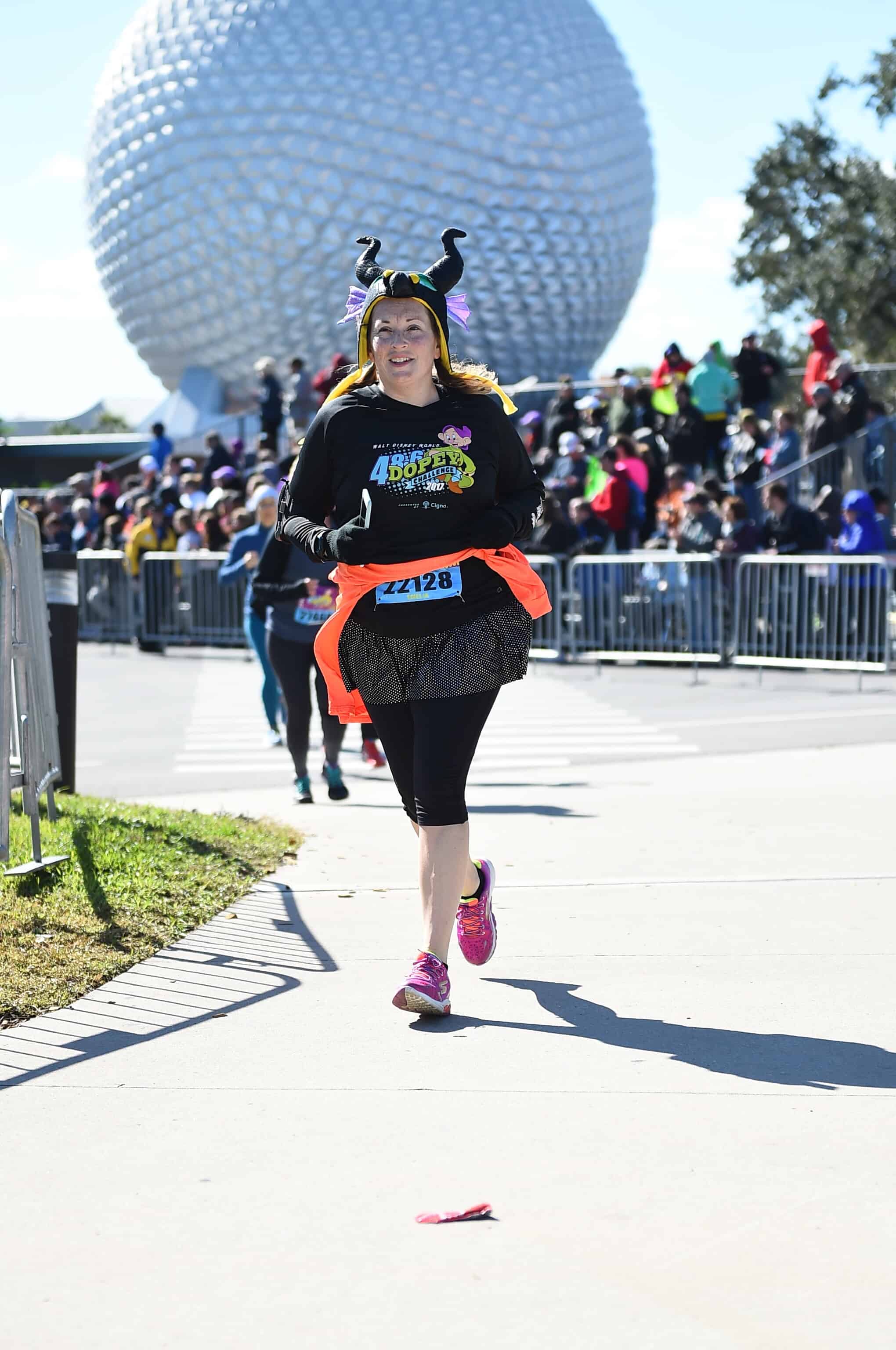 Because the Disney World Half Marathon was cancelled the day before they gave us that medal as well as the Marathon, Goofy, and Dopey challenge medals all at the finish line of the marathon.  All the amazing race bling! 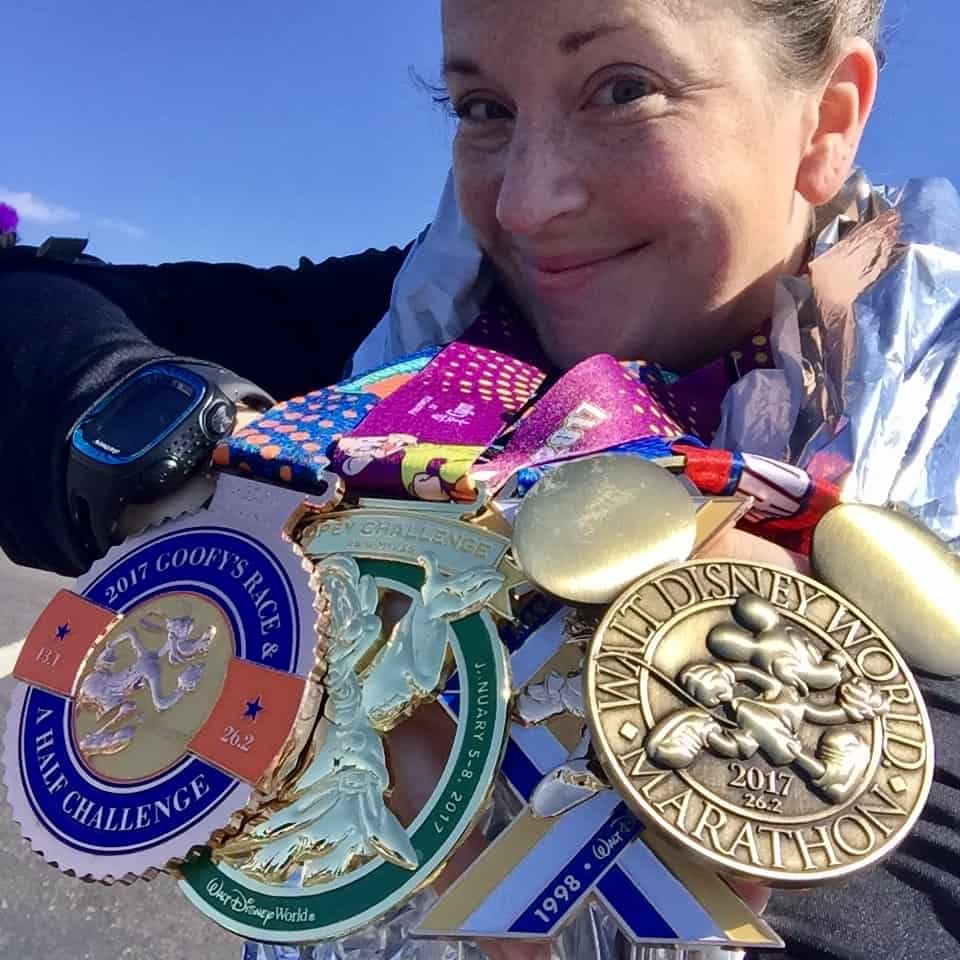 After I got my hot shower we headed to Epcot to walk around World Showcase and enjoy a drink. 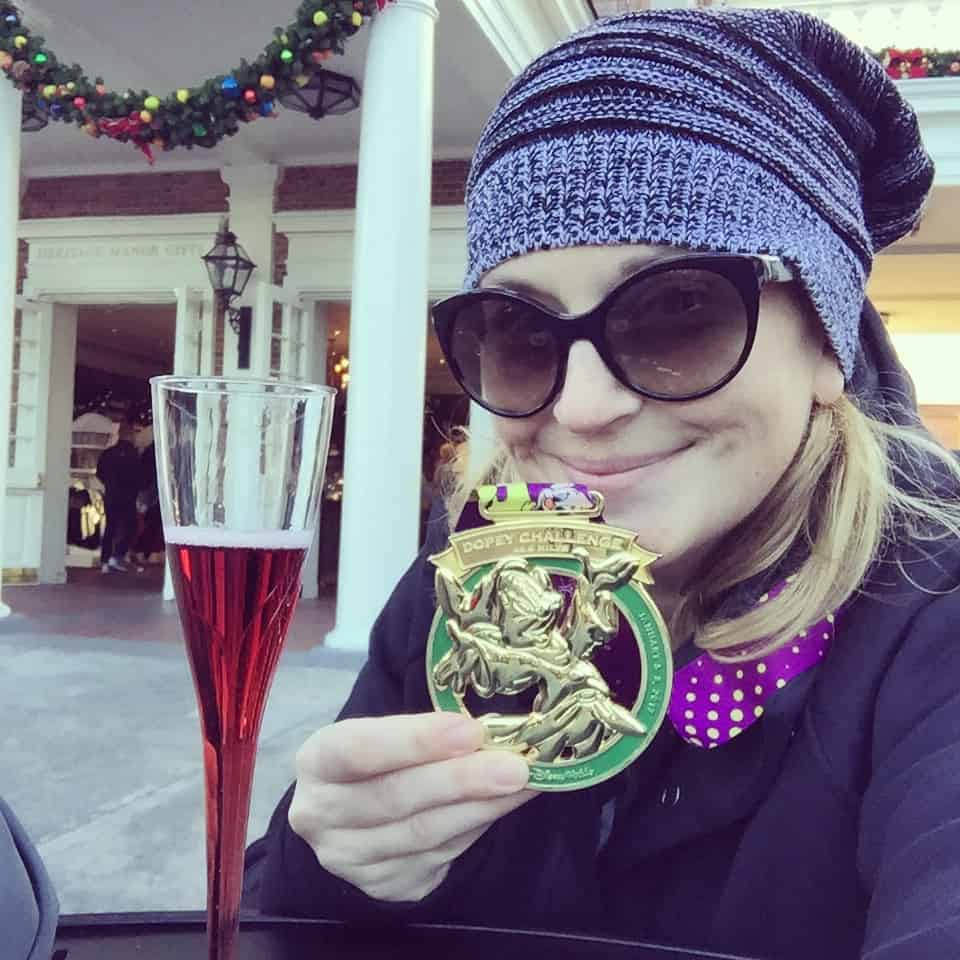 We left Walt Disney World Marathon Weekend with 8 new medals for the family and a ton of great memories. 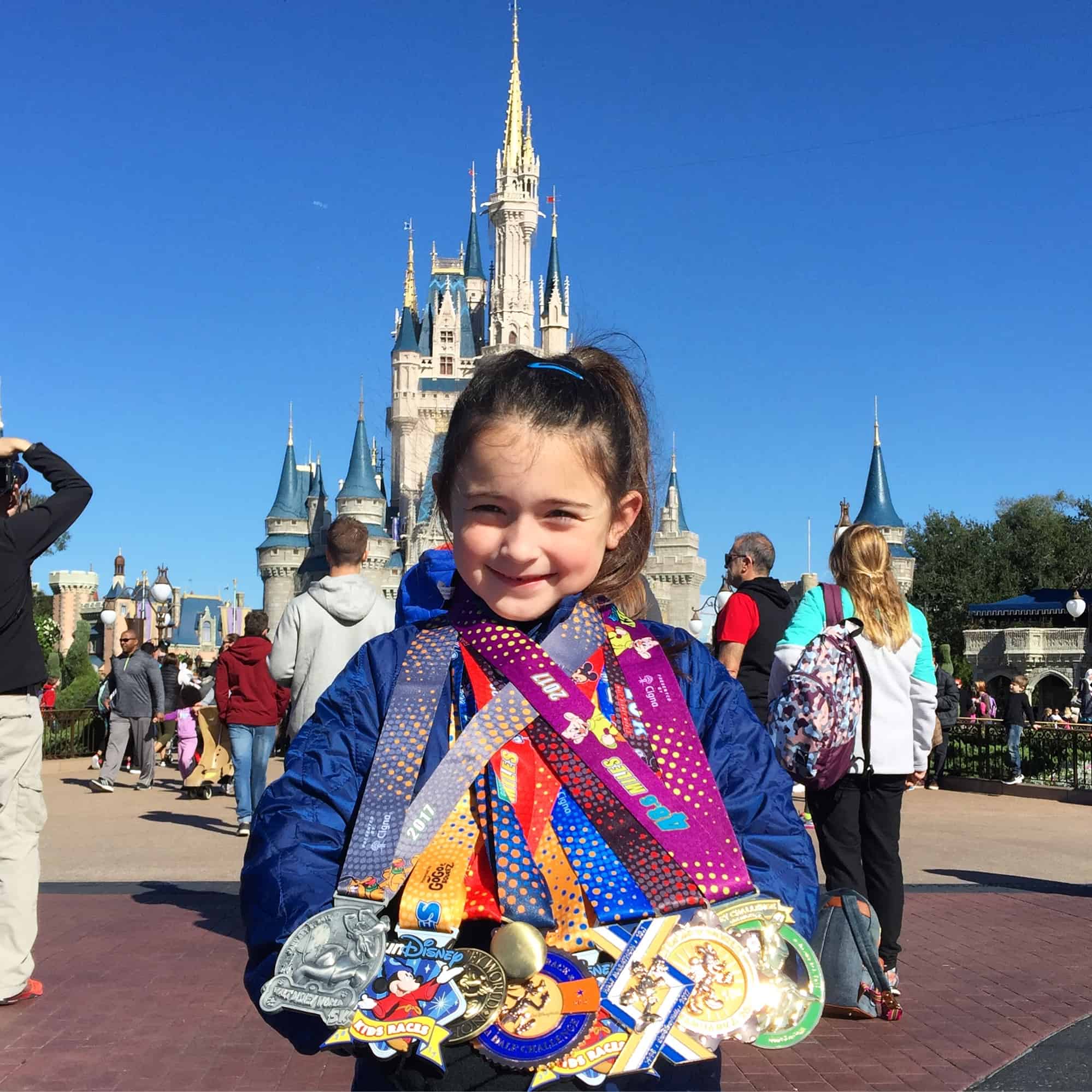 Thank you runDisney for another awesome Dopey Challenge!

You can read my 5k, 10k, and half marathon recaps here.