New Show at Disneyland in the Fantasyland Theatre: Mickey and the Magical Map

Mickey and the Magical Map is the new show located in the Fantasyland Theatre at Disneyland.  This was previously where the Princess Fantasy Faire was located.

The show used some fun technology.  Most of the stage was a large 3 tier electronic screen that was used primarily as a map and changing background that Mickey was able to interact with. 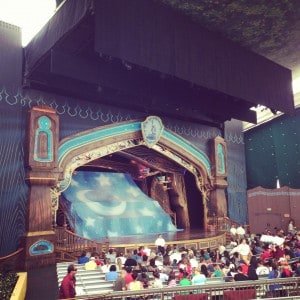 The show featured lots of fun music and was fast paced which was great for my 3 year old.  She tends to lose focus in other shows.  This one kept her attention and as soon as it was over wanted to watch it again “RIGHT NOW!” 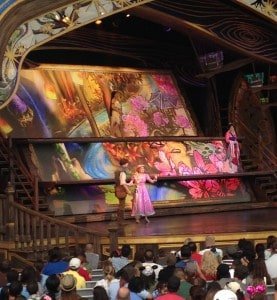 Sebastian makes an appearance and sings Under the Sea, which is always one of my favorite Disney songs. It just makes me want to dance. 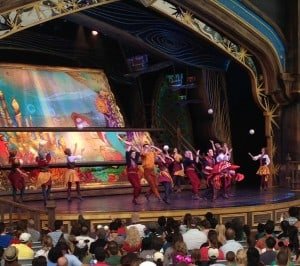 Princess Tiana even makes an appearance! 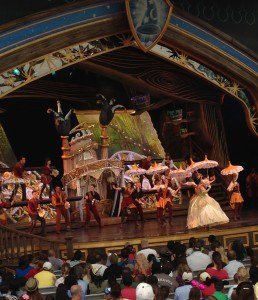 It is not a very long show in comparison to Aladdin over in DCA, but it is almost all singing and dancing which is a lot of fun for kids of all ages.  The crowd response was great with lots of cheering and clapping.  We walked in to the show 10 minutes before it started and got seats towards the side.  If you want seats very close there were people lining up after each performance for the next performance.

If you have time at Disneyland I recommend checking out Mickey and the Magical Map.  It is also shaded which is a nice treat so sit and enjoy a show on a hot Disneyland day.

Do you have a favorite Disney stage show? Aladdin at California Adventure?  Nemo at Animal Kingdom?  Beauty and the Beast at Hollywood Studios?  Small but awesome, Billy Hill and the Hill Billies over at the Golden Horseshoe? (One of my favorites)