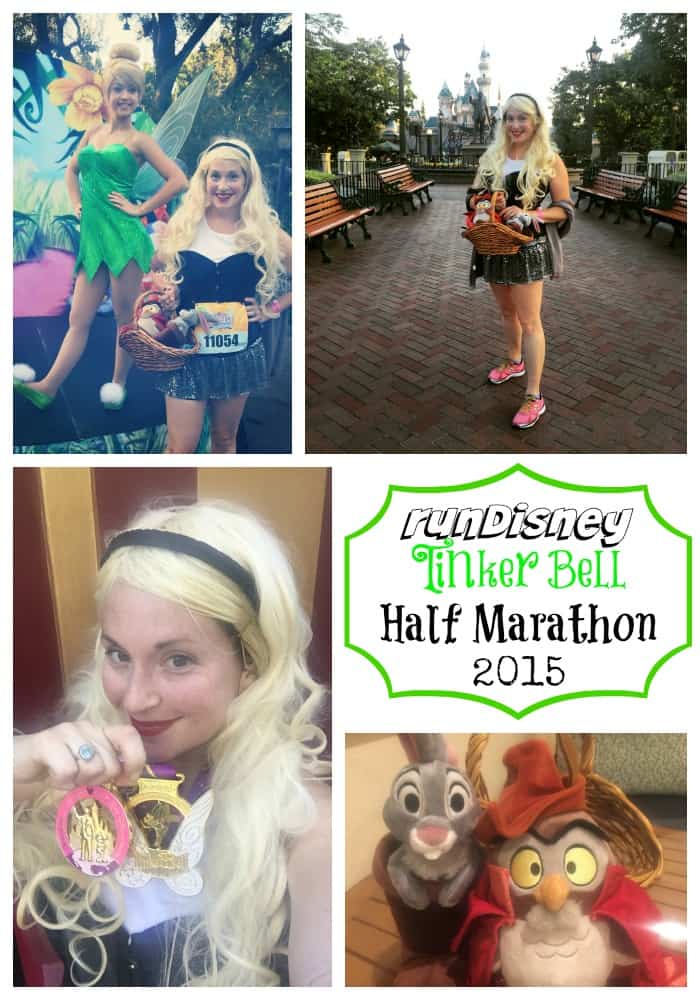 I have ran the Tinker Bell Half Marathon at Disneyland every year and it continues to be one of my favorite races. You can read last years recap here.  The course is nice with a lot of miles in the parks. This year I was a little nervous I wasn’t going to make it, but I did just in the nick of time!  I was at Disney World for the Social Media Moms Celebration and our plane was scheduled to leave Saturday at 5:30pm to fly out to Disneyland.  When we got to the Orlando airport they said that our plane was delayed and there was no way we would make our connection… and they had no other way to get us to Orange County.  I was slightly devastated and then asked if there was any way to get us to LAX? Not nearly as close of an airport, but we would rent a car and drive to Disneyland.  He said he had a flight to Chicago we could take and then a flight from there to LAX…so that is what we did.  Unfortunately once in Chicago the flight to LAX was delayed and we didn’t end up getting to LAX, renting our car, and getting to our Disneyland hotel until 12:45am.  If you know anything about runDisney races, you know they involve an early wakeup call.  I got exactly 1 hour and 37 minutes of sleep before my alarm went off.  I made it though and that is what counts. 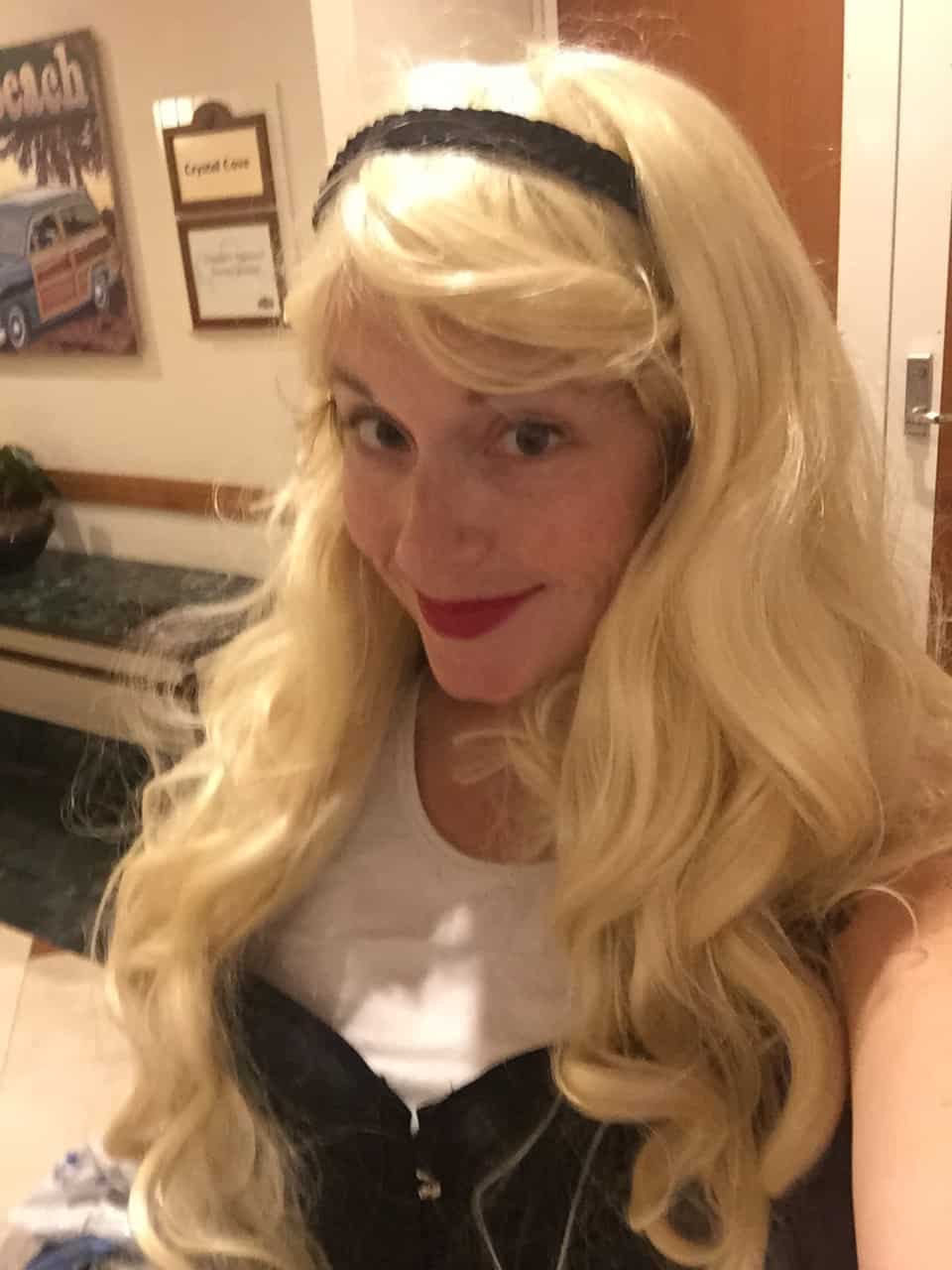 Considering everything I actually felt pretty great that morning.  I was totally operating on pure adrenaline.  The tiredness didn’t hit me until later that afternoon.

My daughter’s favorite princess is Aurora (Sleeping Beauty).  I had already done a running costume as the pink version, so we decided Briar Rose would be fun.  I definitely don’t recommend running in a wig, corset, and carrying a basket for 13.1 miles unless you are completely confident about it.  I added my little critter friends to the basket because I was worried people wouldn’t know who I was otherwise, but the response was pretty amazing I have to say. 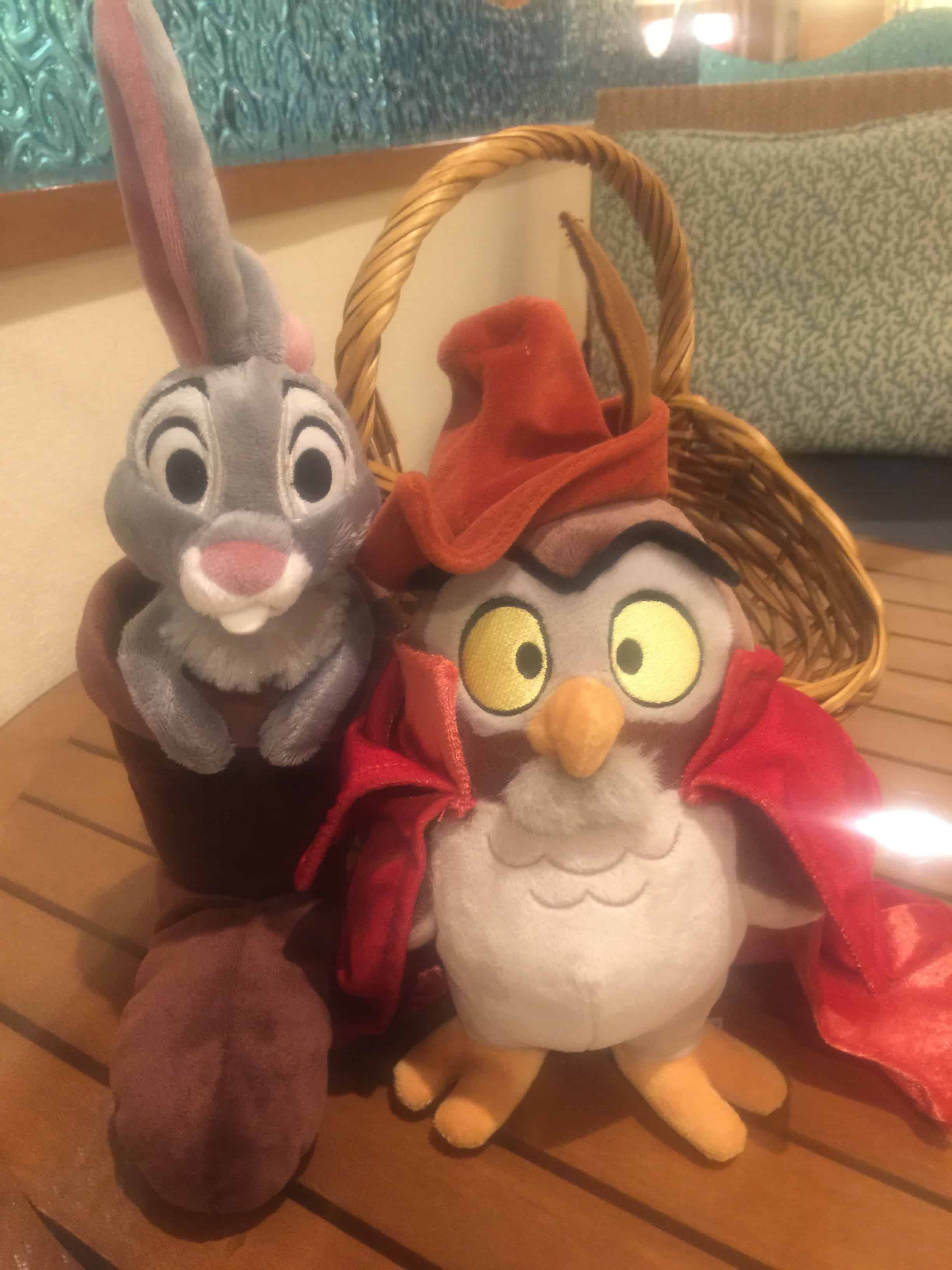 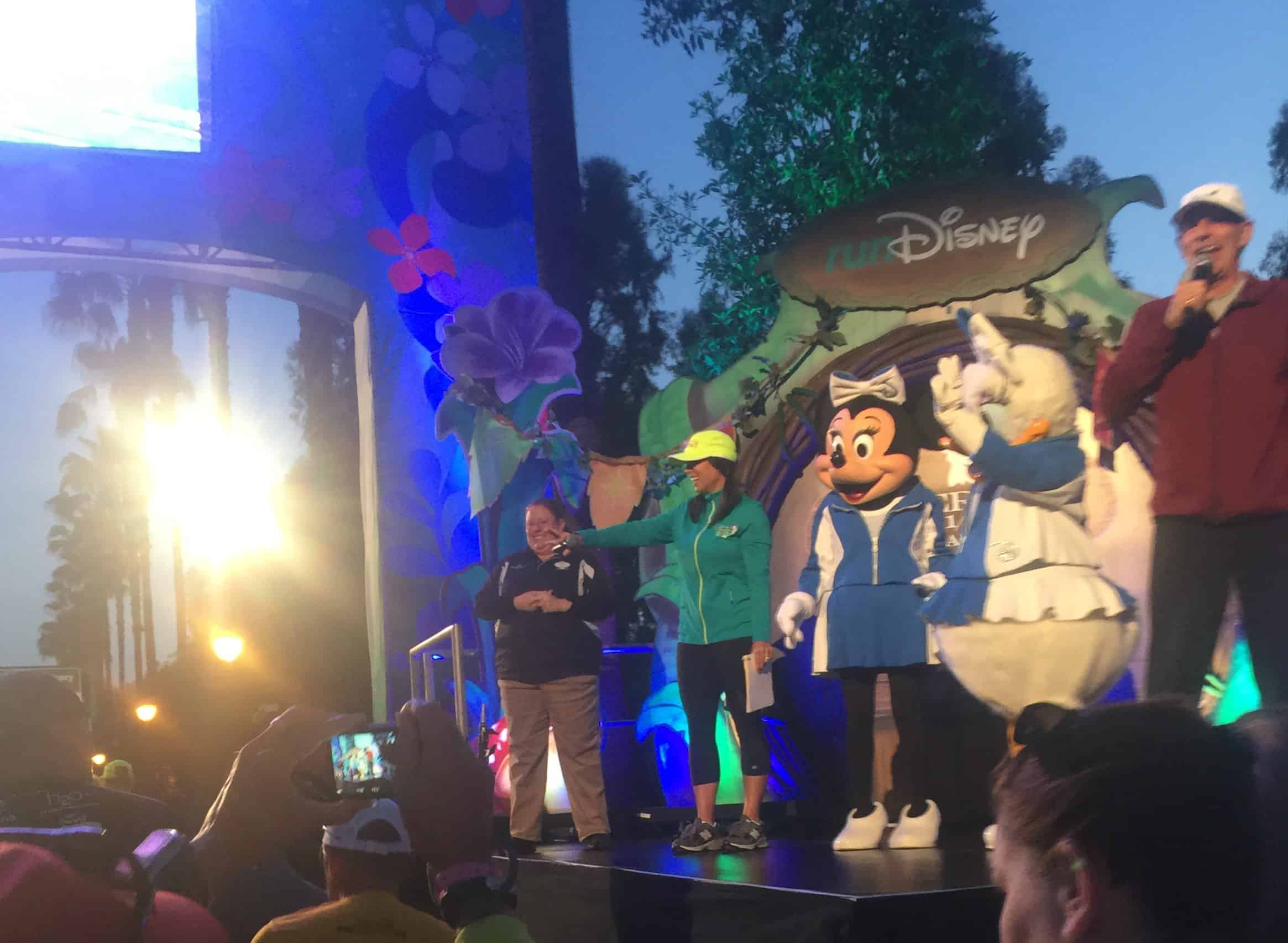 We made a loop around surfaces streets and then entered the backstage area of the parks.  We came into California Adventure near Tower of Terror.  The first character we saw was Buzz Lightyear and his super cute lady friends. 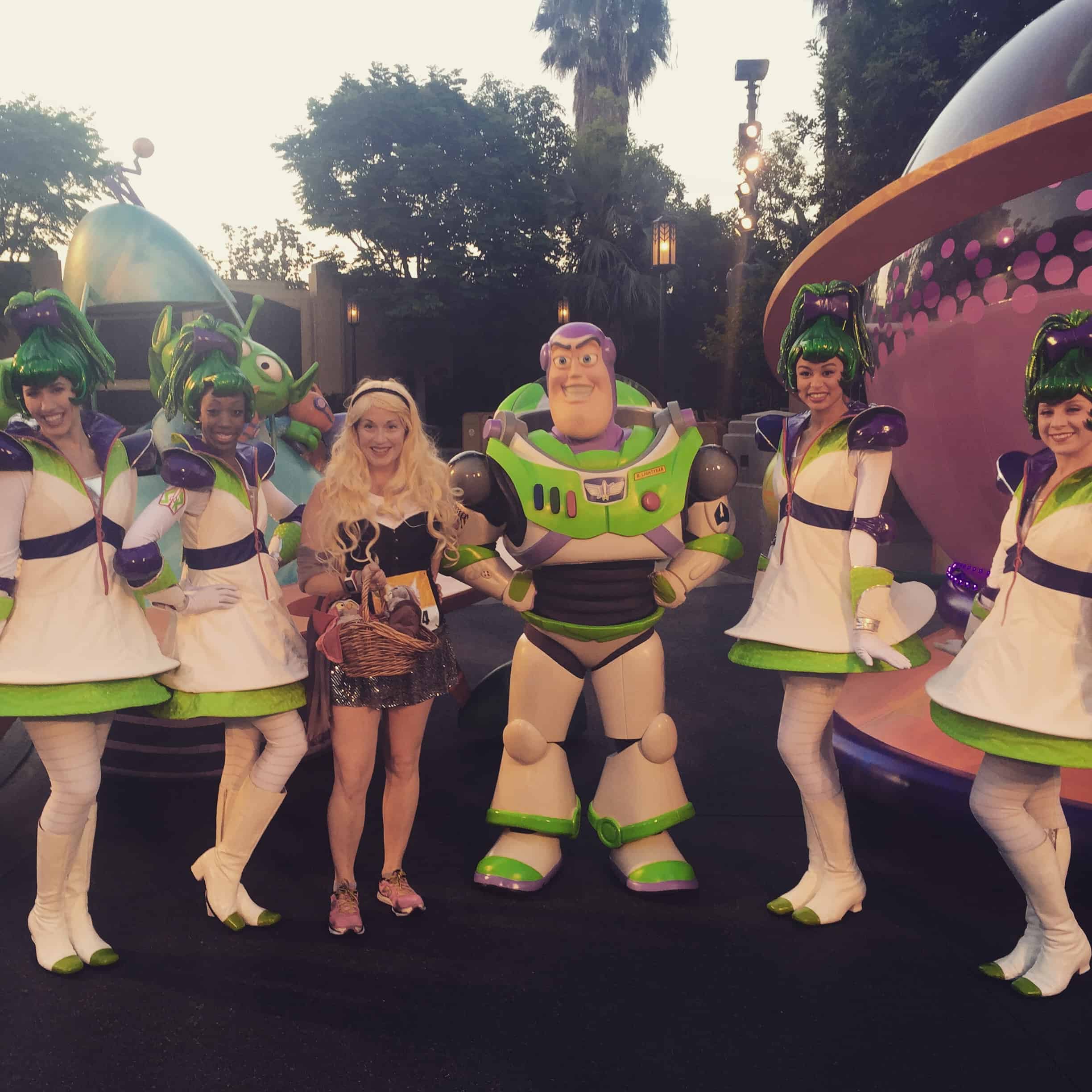 Lightening McQueen and Mater were out in Cars Land. 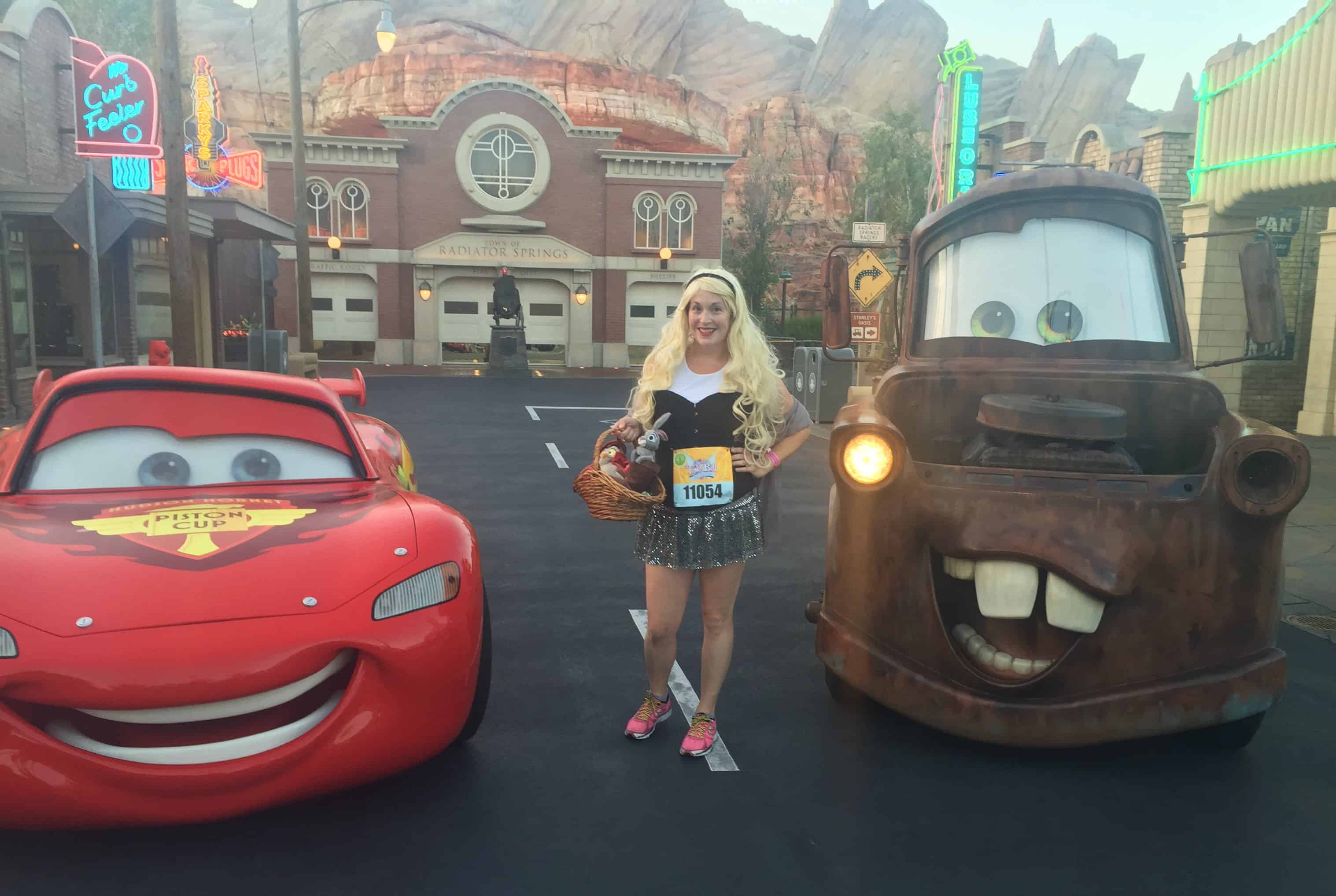 Silvermist was near Paradise Pier. 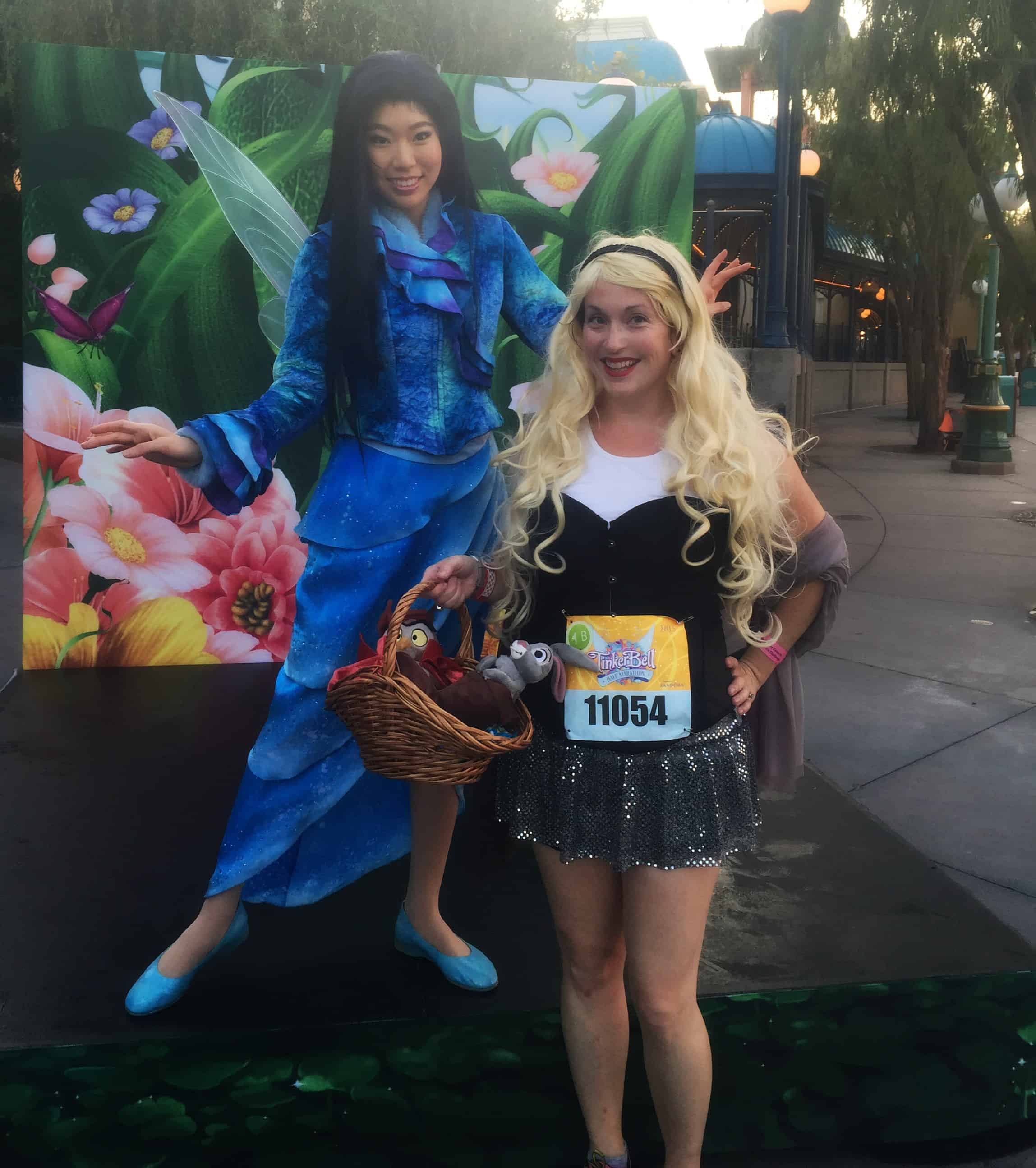 I always stop for the pic with the Mickey Fun Wheel. 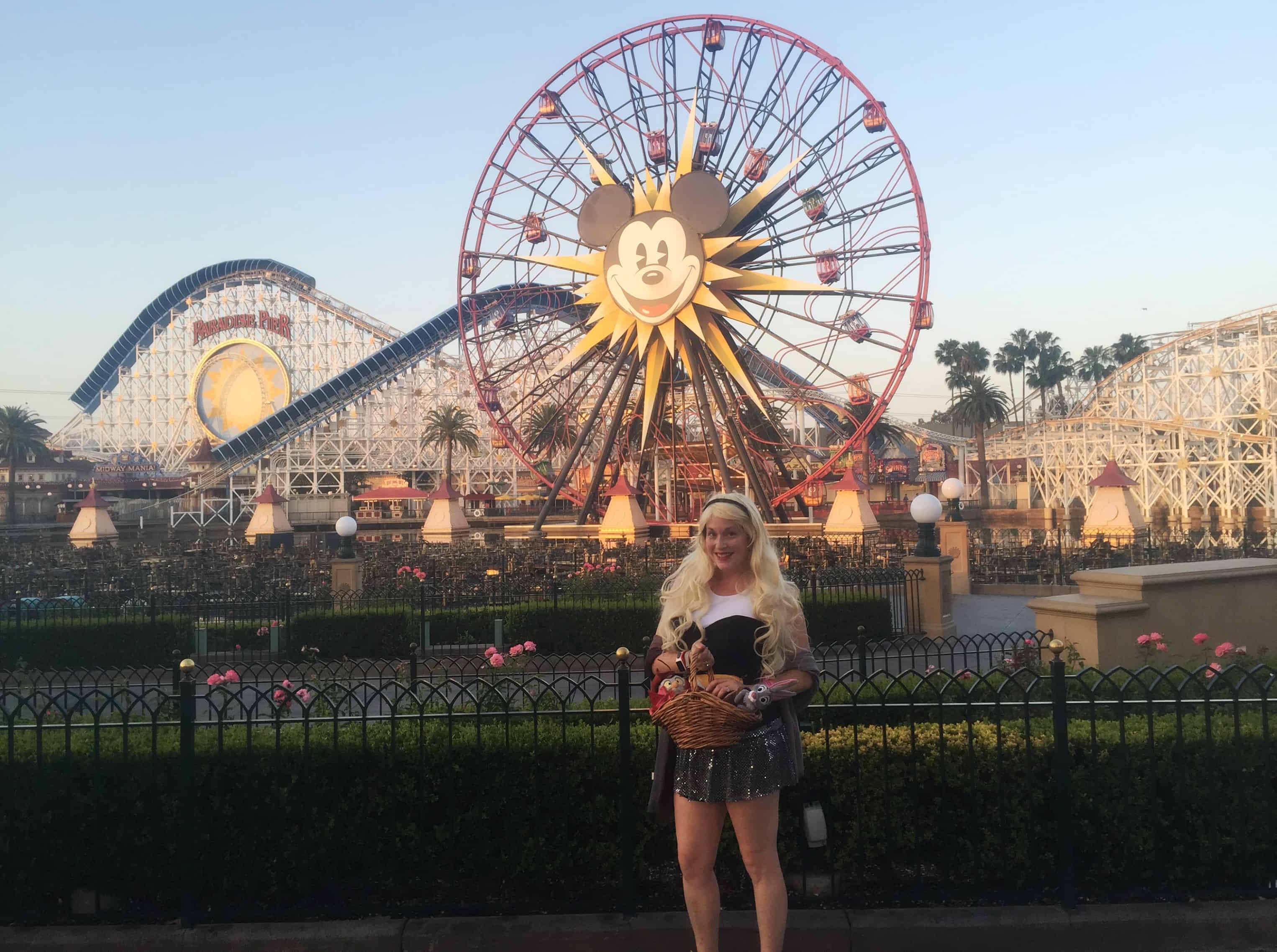 Vidia, the feisty little fairy, was the last character in California Adventure before we made out way to Disneyland. 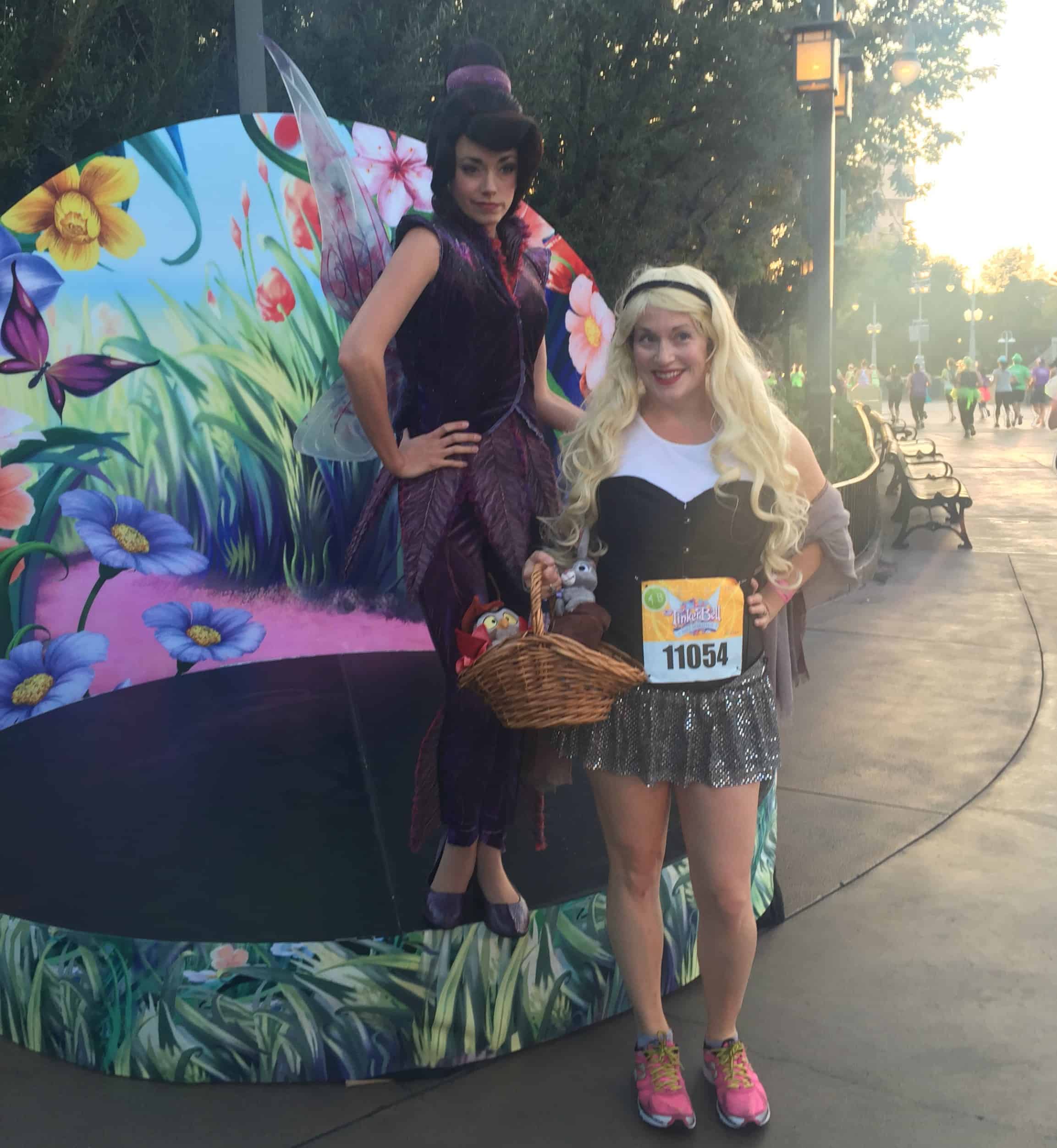 On Main Street was Chip, Dale, and Goofy. 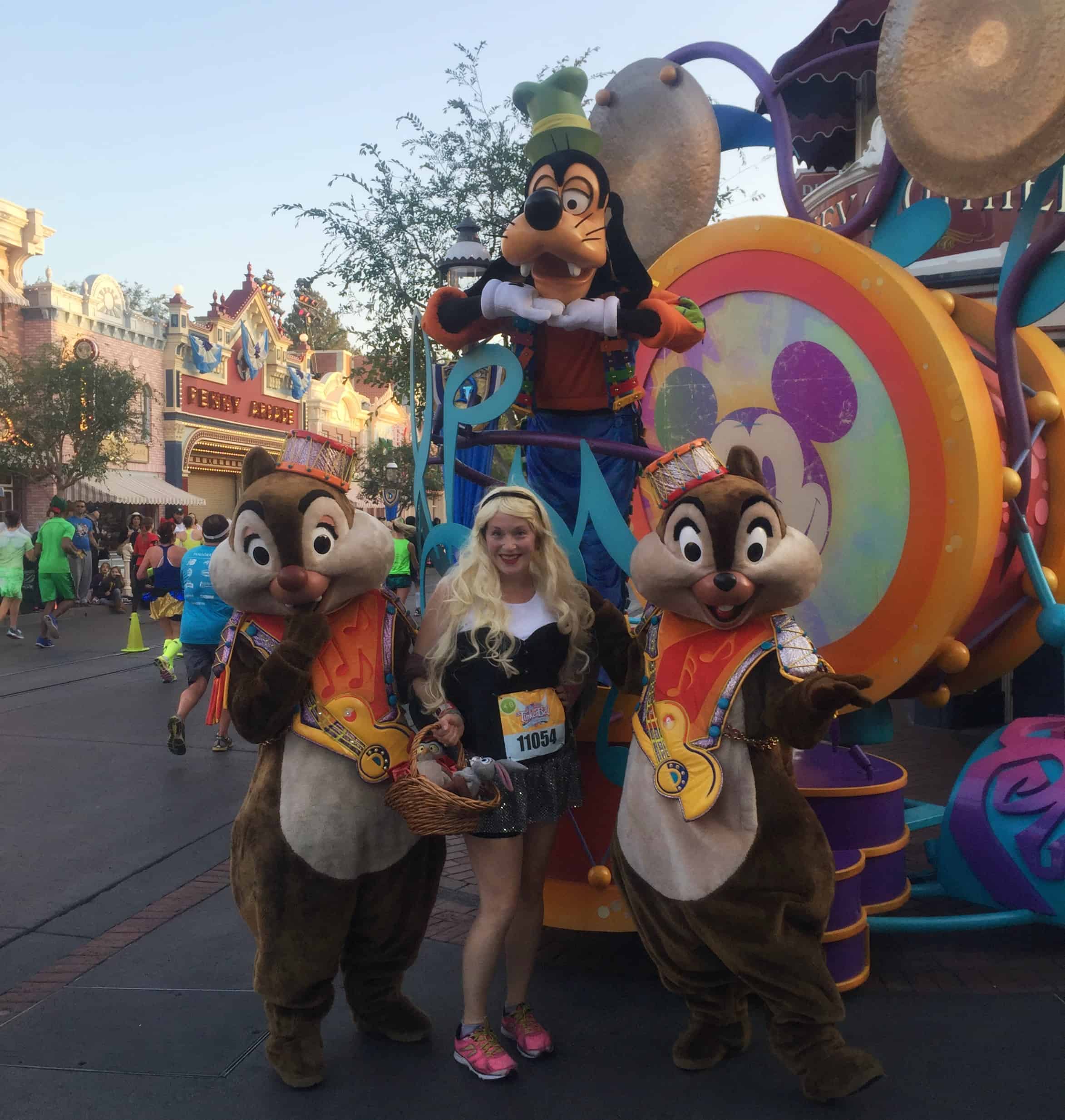 The light of the sky with the sun coming up was to pretty not to stop for a picture with Uncle Walt and Mickey (the Partners Statue). 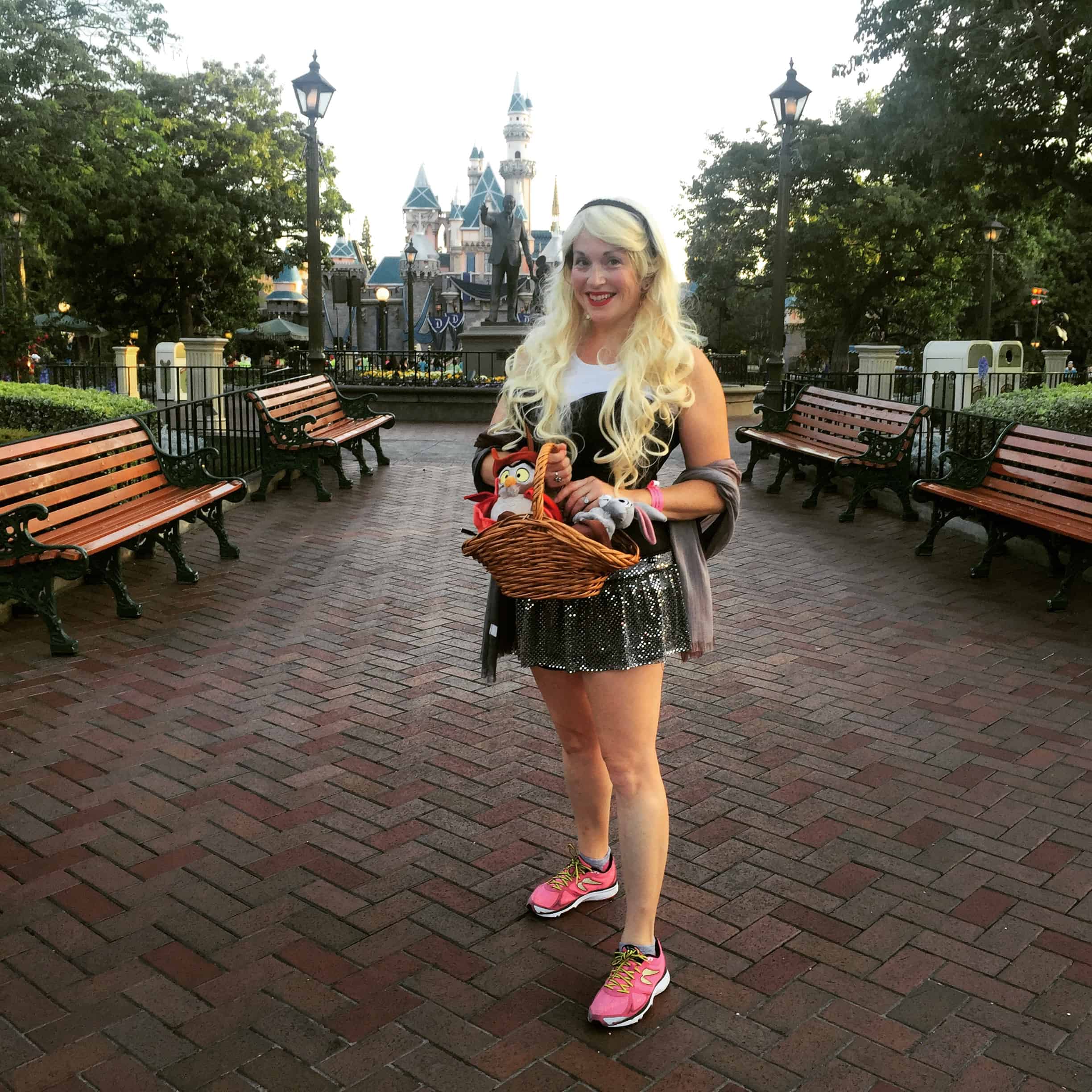 The castle is all decked out for Disneyland’s 60th Anniversary. 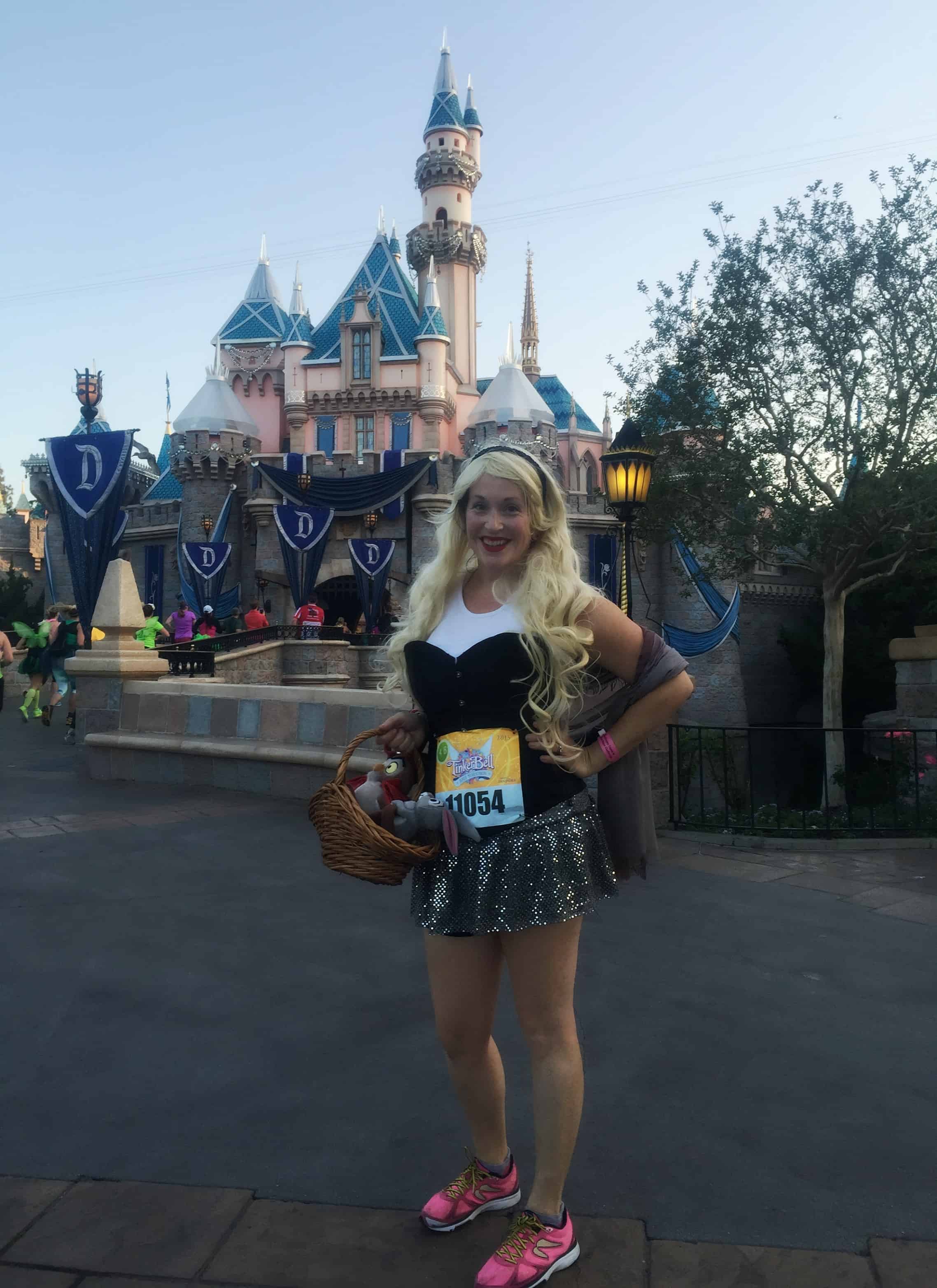 Tinker Bell was out near Pixie Hollow.  She had the longest line by far, but it moved pretty fast.  The other characters didn’t have much of a line at all when I was running through. 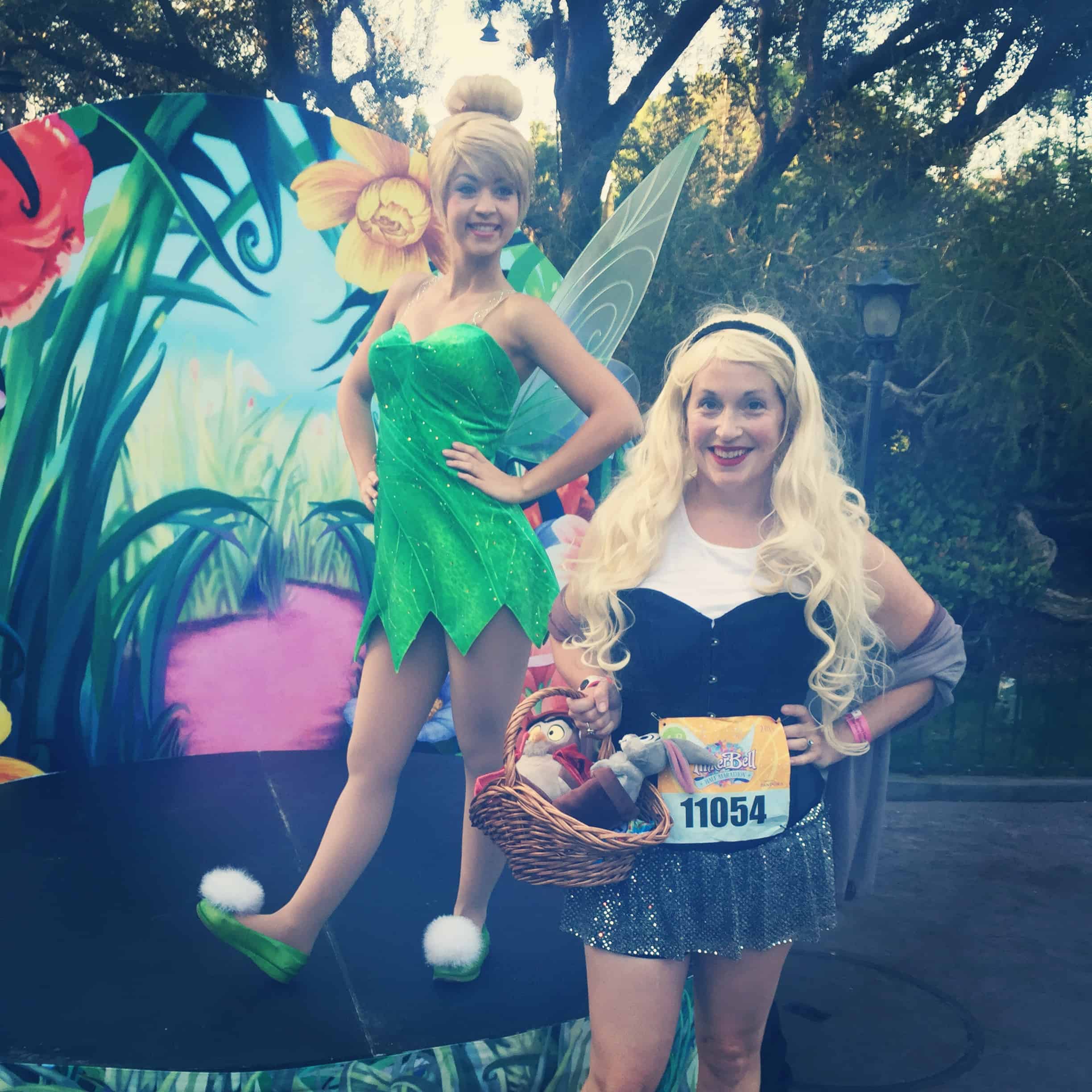 Stormtroppers in Tomorrowland was a fun change from the fairies. 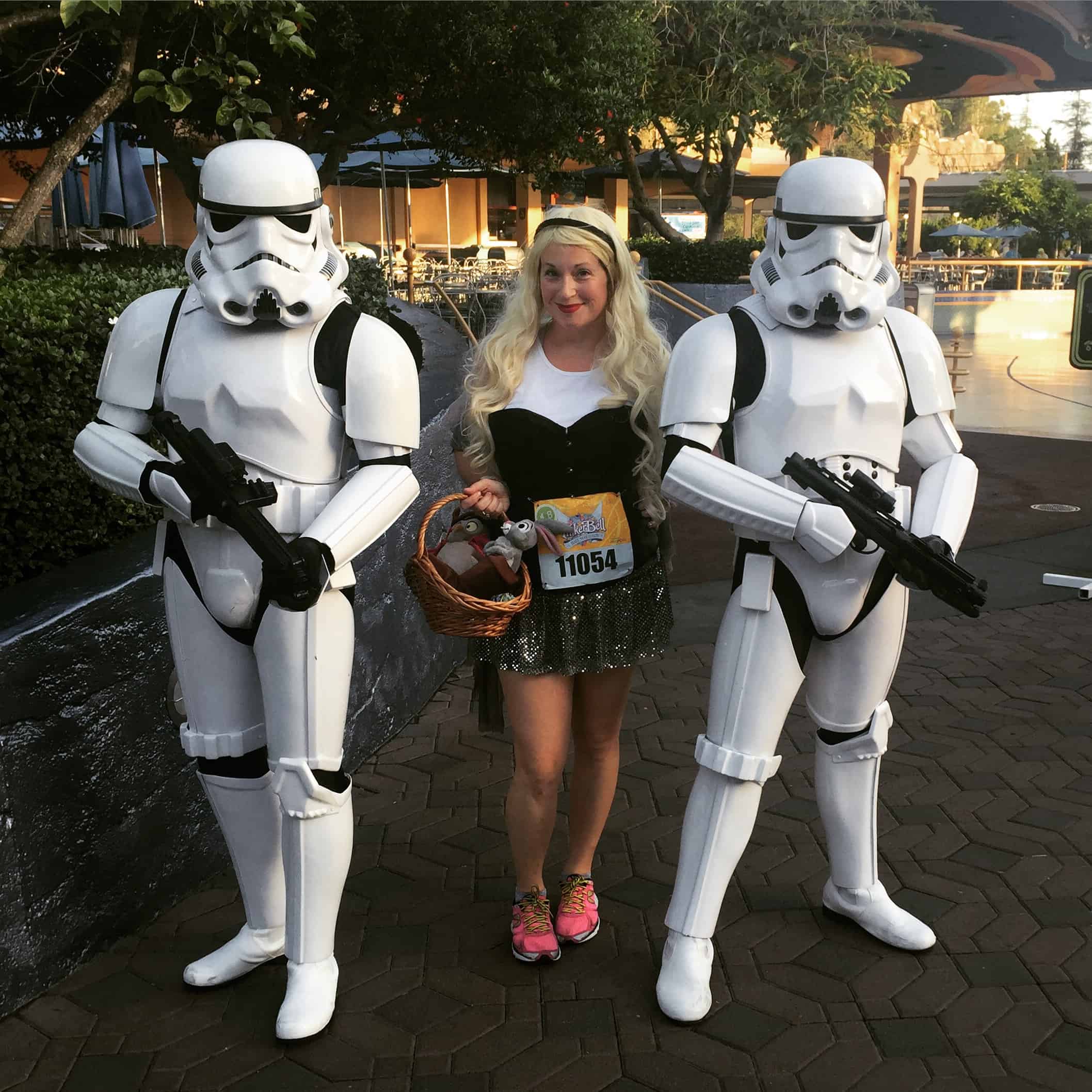 Iridessa and Rosetta were near Small World.

Captain Jack Sparrow was on the bridge above Pirates of the Caribbean, but not down low for pictures with runners.

We exited Disneyland and ran through Downtown Disney.  At the end near the Disneyland Hotel was the Red Hat ladies.  This year’s crowd was bigger than ever!!!! Those gals are amazing!

When we got off Disney property we were around mile 7.  Running through downtown Anaheim went by super fast and next thing I knew we were done! 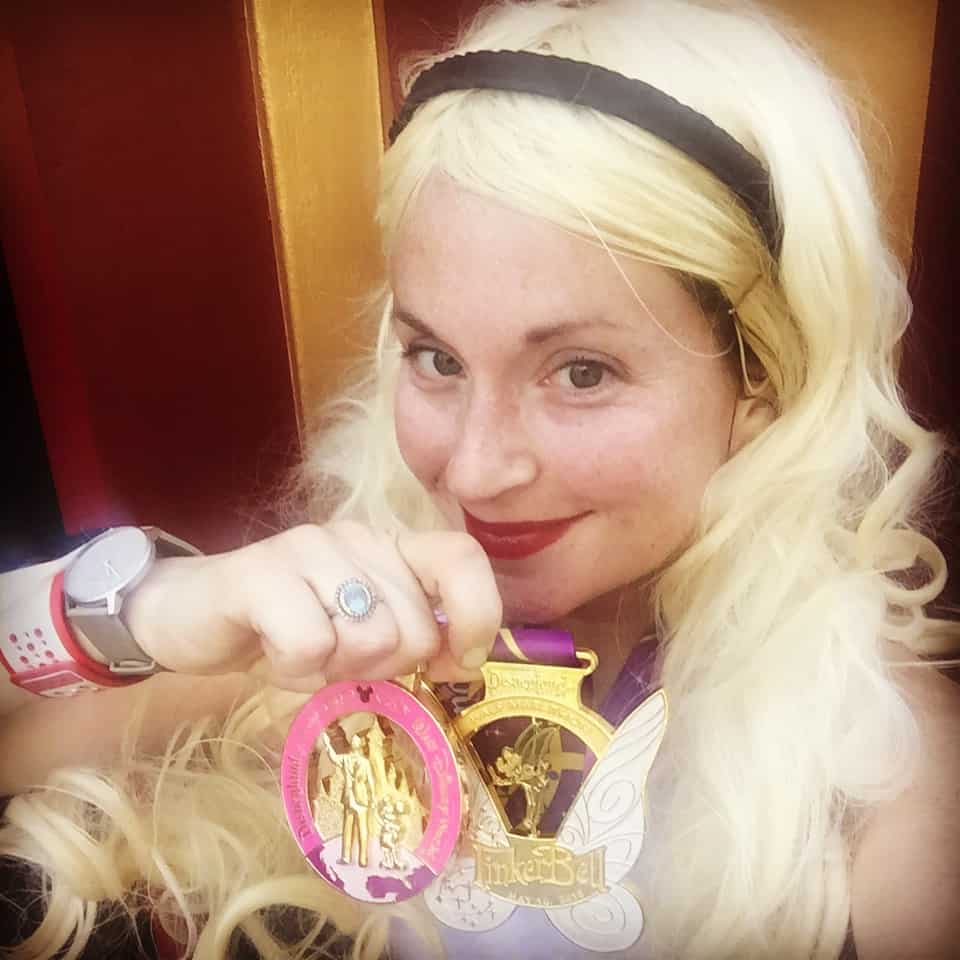 I barely got any sleep, stopped for every picture possible, took one bathroom break, and managed to come in around 2:50.  I had a great time and I can’t wait for the 5 year Tinker Bell Half Marathon anniversary next May!

Did you run the Tinker Bell Half Marathon?  Or do you have any questions I can answer for you about the race?