After running the Star Wars 5k and 10k, I was once again up for a 5:30am start on Sunday morning for the Star Wars Half Marathon. It was part 2 of the Rebel Challenge, which means you score the challenge medal in addition to each race medal.  On top of that running the Star Wars half qualified me for my runDisney Coast to Coast medal since I had ran the Dopey Challenge at Disney World the weekend before.

I’m not going to lie, I was really tired the morning of the half and had been battling a cranky knee.  I met up with a couple friends at Starbucks which helped my mood a little.  In my corral I got to see Tam who is also an INKnBURN ambassador. 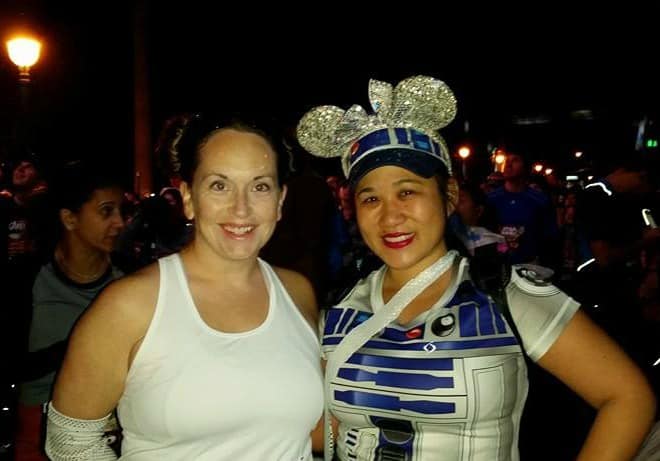 I dressed up as Princess Leia with my hair in buns and wore a Sparkle Athletic skirt and sleeves.  The race was off and we made a quick entry into the backstage area of Disneyland.  I have to say that I really liked the course, except we did’t get to run through the castle…but there is always a picture with the castle instead. 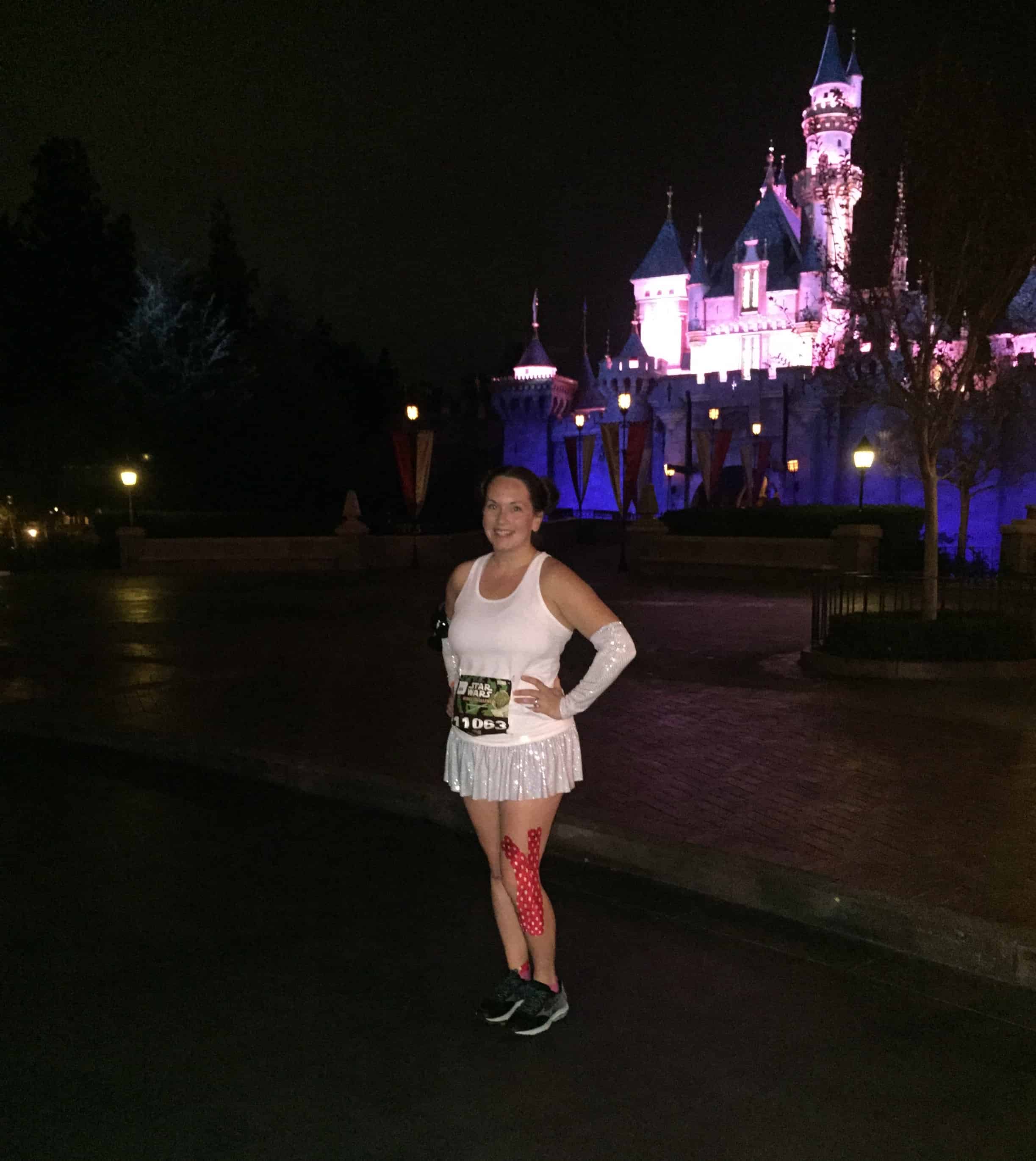 Luke and Leia face characters were the first real picture stops over in Frontierland.  The line was RIDICULOUS, so I didn’t stop.  My friend Jindy, who writes Flowers Croon (@iRunDisney) texted met that she was in line for Chewbacca over by the Matterhorn, so I just kept going and he was the next official character stop.  I am SO glad I stopped for a picture with him because it is one of my favorites. 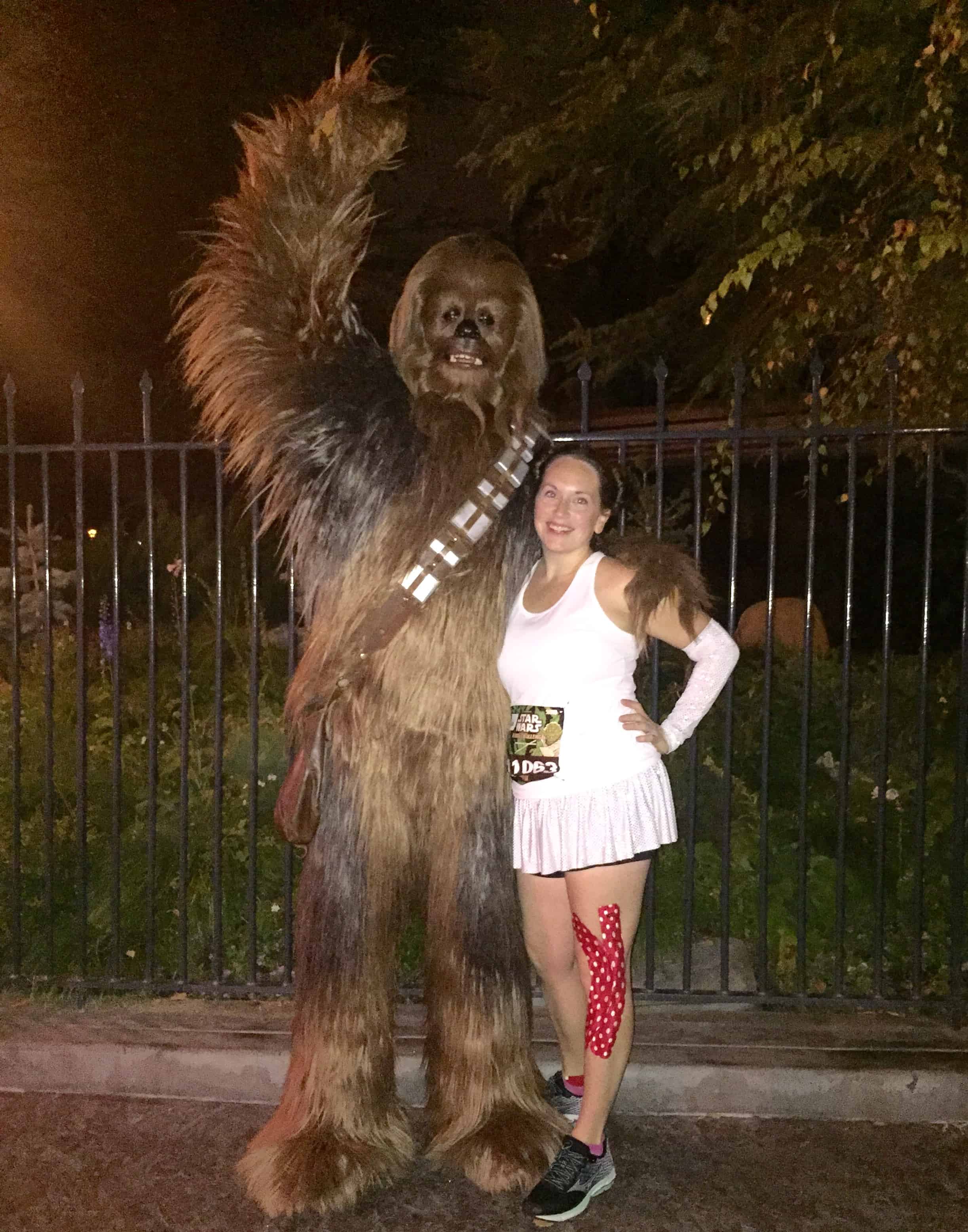 Jindy and I decided to run together since we were both pretty tired that morning.  I am so glad we did because it totally helped me enjoy every mile.  Darth Vader was in front of Star Tours and he had a super long line, but we decided to wait. 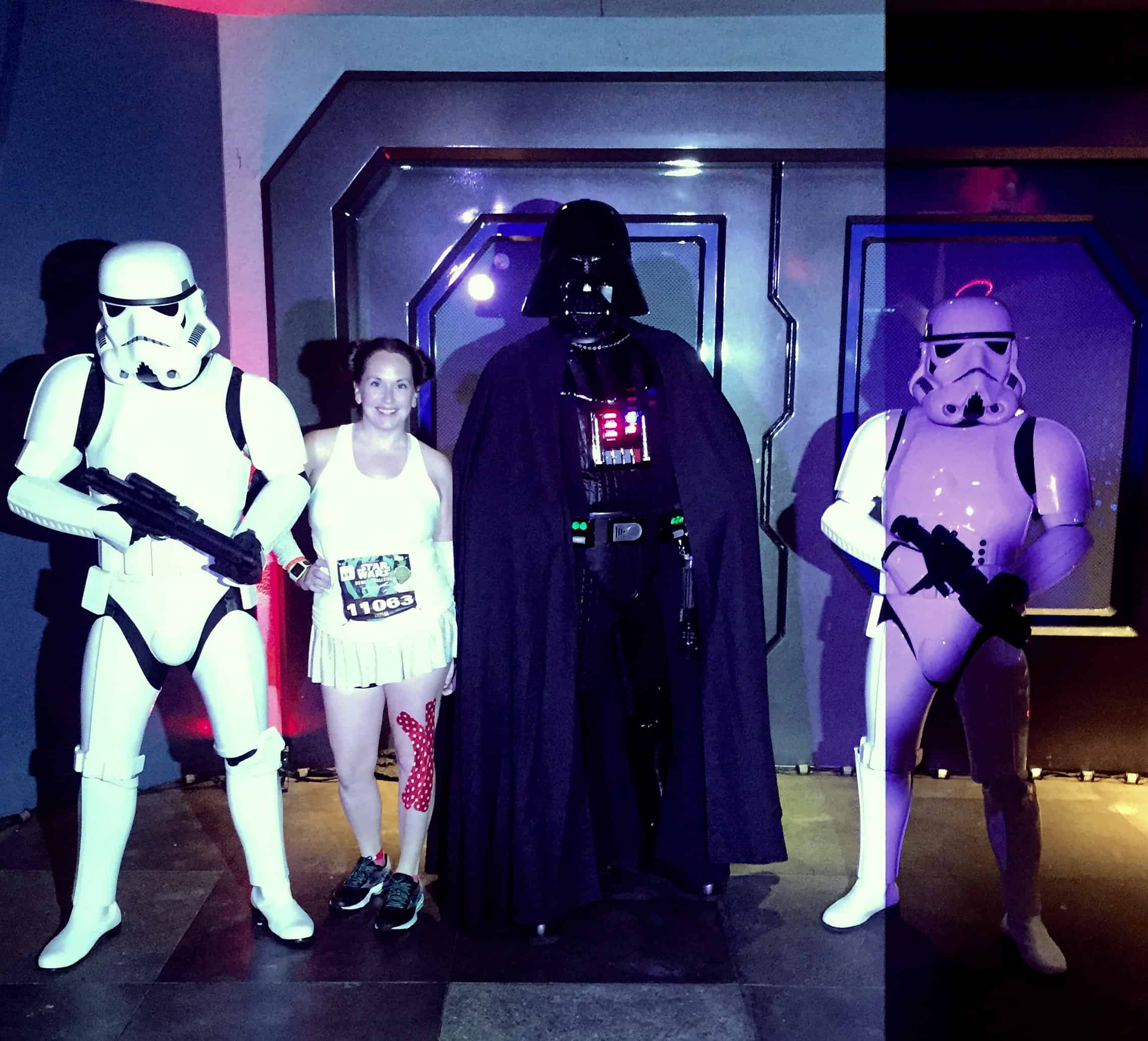 We made our way over to California Adventure and stopped just as the sun was coming up for a picture with some StormTroopers. 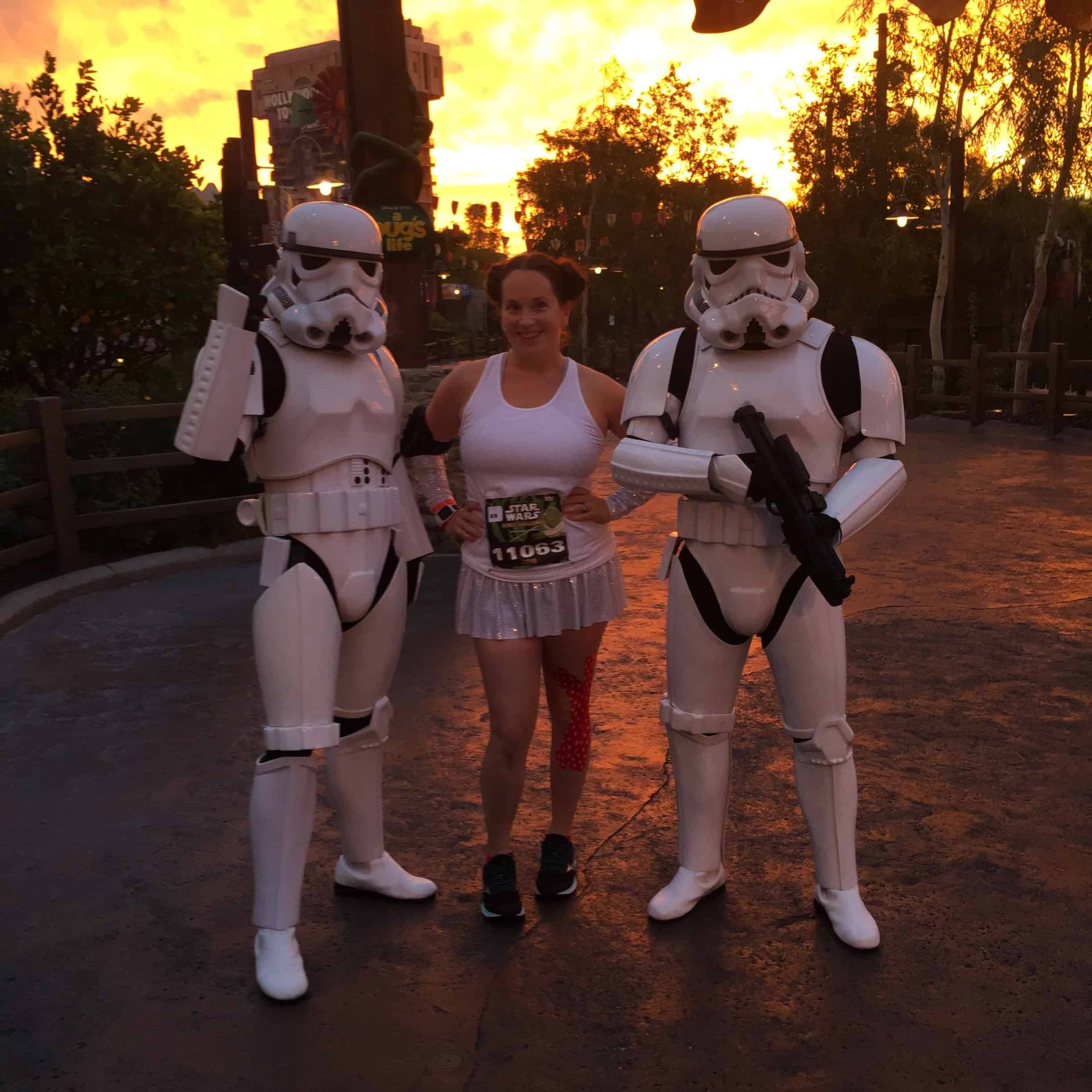 I had to stop for a Princess Leia selfie with the Mickey Sunwheel. 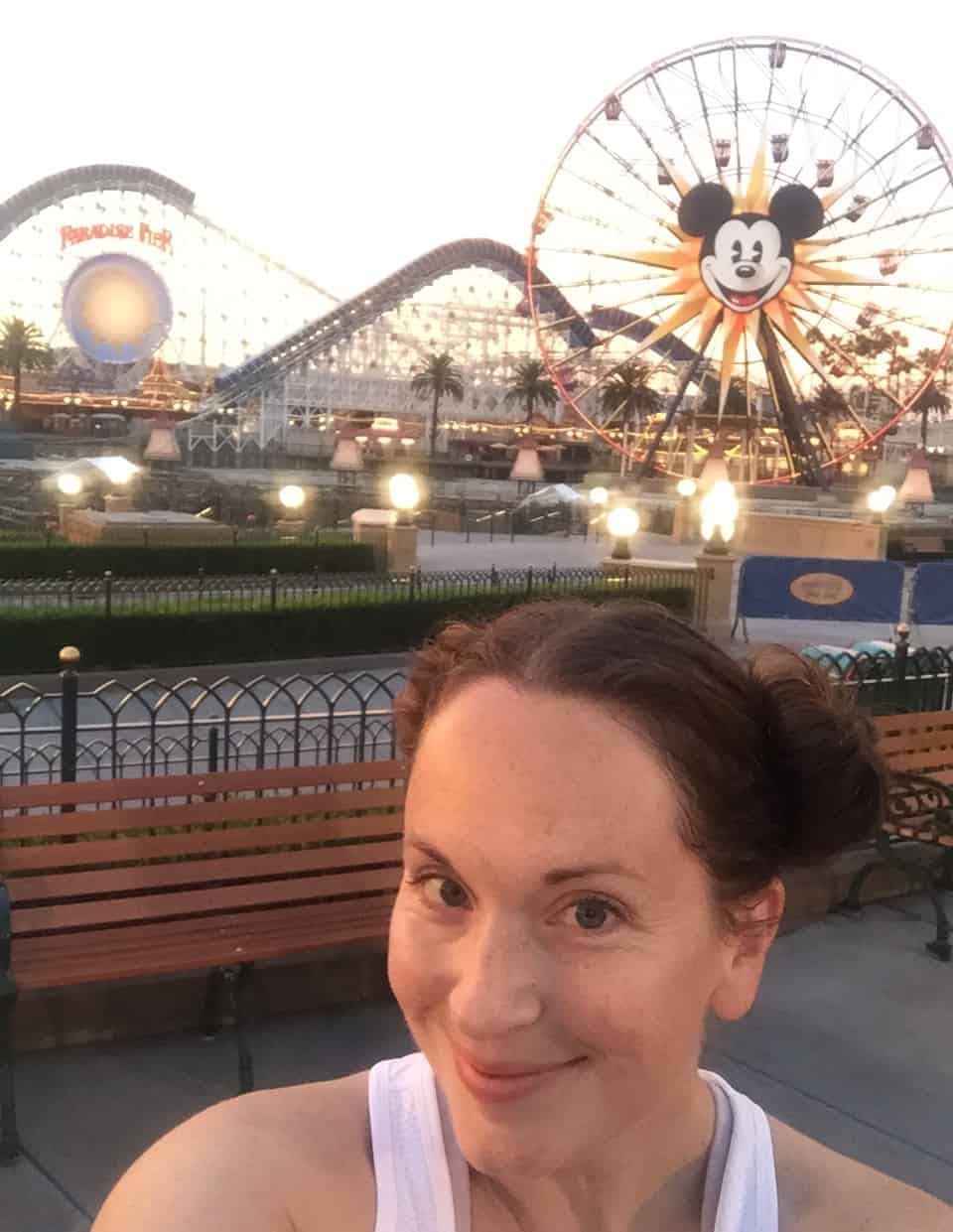 I LOVED the Star Wars course.  It was the flattest course of any of the Disneyland races with no overpasses to climb over.  It also didn’t involve any dirt trails like Disneyland Half and Avengers Half have.  There were a bunch of fun Star Wars cosplay people along the course which was awesome sightseeing.

We took our time doing a run walk.  My knee held up great and it was super fun to chat with a friend for 13 miles since I am so use to just running alone.  It was awesome.  It certainly wasn’t my fastest time at all, but I made it in one piece and had an amazing time running it. 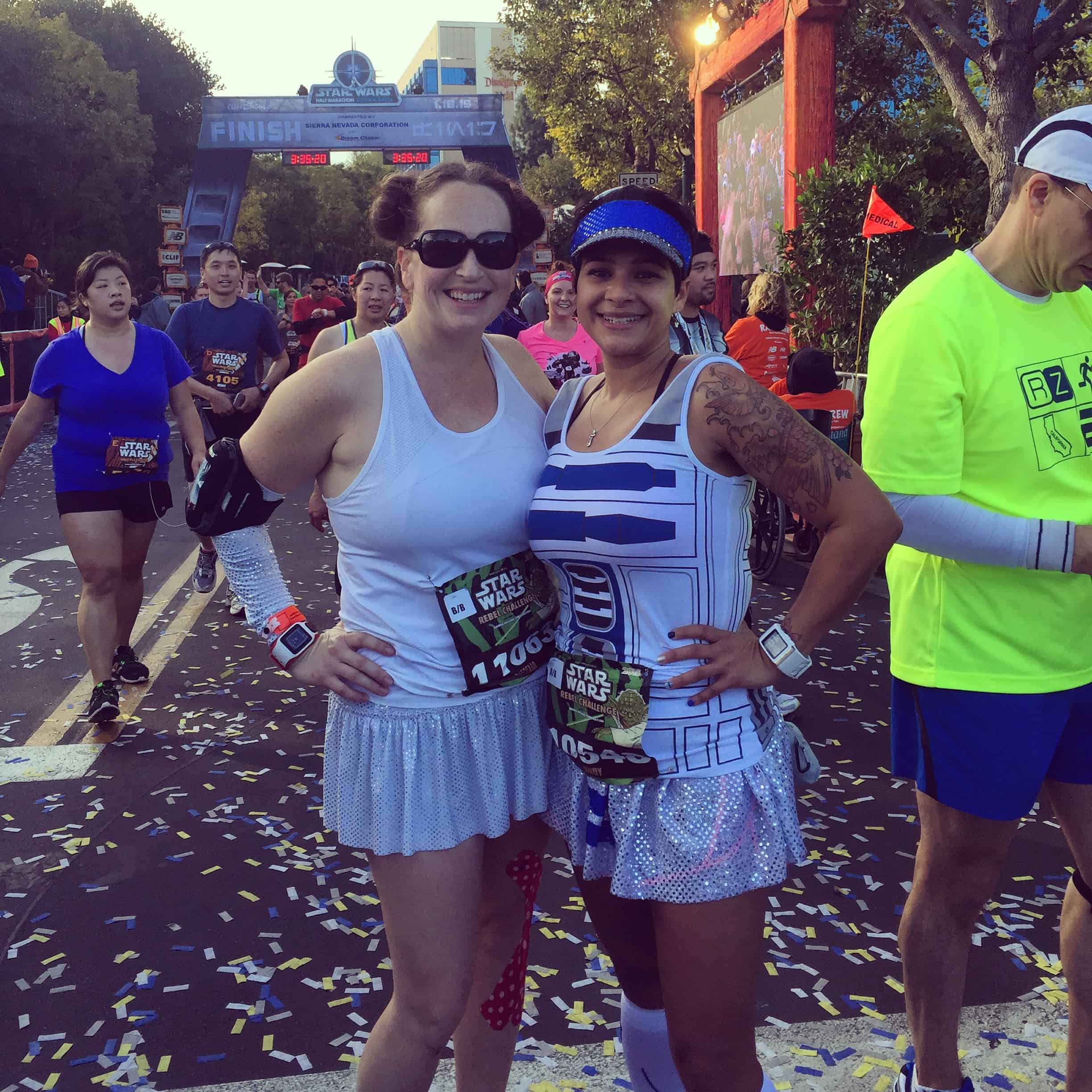 I earned my Star Wars Half, Rebel Challenge, and Coast to Coast medals at the end.  Apparently the novelty of me finishing a half marathon has worn off with my husband.  He was at the hotel with our daughter and I sent him this picture and here is his response.  Lol

Did you run the Star Wars Half Marathon?