runDisney posts that you CAN earn both the traditional and special edition pink Coast to Coast medals in 2014!

I am personally quite excited about this one! Since I am running the Dopey Challenge at WDW in January followed by the Tinker Bell Half Marathon at Disneyland also in January I would be earning my Coast to Coast medal at Tink.  runDisney had announced the special edition pink Coast to Coast medal for completely both the Tinker Bell Half and the Princess Half which is at WDW. By their normal rules I wouldn’t be eligible to get the pink C2C medal since I would be getting the traditional one at Tink and you can only get one in a calendar year.  Some of us that run all runDisney races were a little bummed about this because we love the pink C2C medal.  When someone had asked runDisney initially we were told that yes, you can only earn one C2C medal in a year.  Well look what is now on runDiseny’s website. Yay! In 2014 it is an exception. If you complete Tink and Princess you get the pink C2C medal and it says if you compete another set of elgible races than you can earn the traditional C2C medal.  So since I am running Dopey Challenge and also plan to run Disneyland Half that would count as another set to earn my traditional C2C.  Visit rundisney.com for more info. 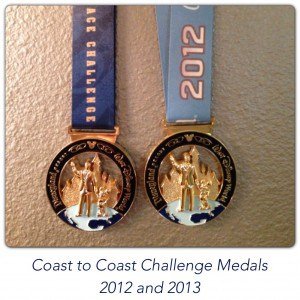 ARE YOU UP FOR THE CHALLENGE?

Do you want the ultimate test in endurance with a Disney twist? Then join the runDisney Coast to Coast Race Challenge! If you complete a runDisney half marathon or marathon at the Walt Disney World® Resort and a half marathon at theDisneyland® Resort in the same calendar year, then you will receive a Coast to Coast Race Challenge medal commemorating your achievement!

Also in 2014, participants who complete the Tinker Bell Half Marathon, Disney Princess Half Marathon, and another eligible pair of Disneyland Resort & Walt Disney World Resort races will be eligible to receive the original Coast to Coast Race Challenge medal in addition to the pink version of the medal.

Are you planning to earn your Coast to Coast medal in 2014?