I love running at Disneyland, even if the theme isn’t something I’m crazy about.  Confession: I might be the only person in the world, but I have never seen the movie “The Avengers”.  That said, I know who the characters are because of comics, you know the old school characters.  Another confession: I collected X-Men cards when I was young.  Shhh don’t tell anyone 🙂 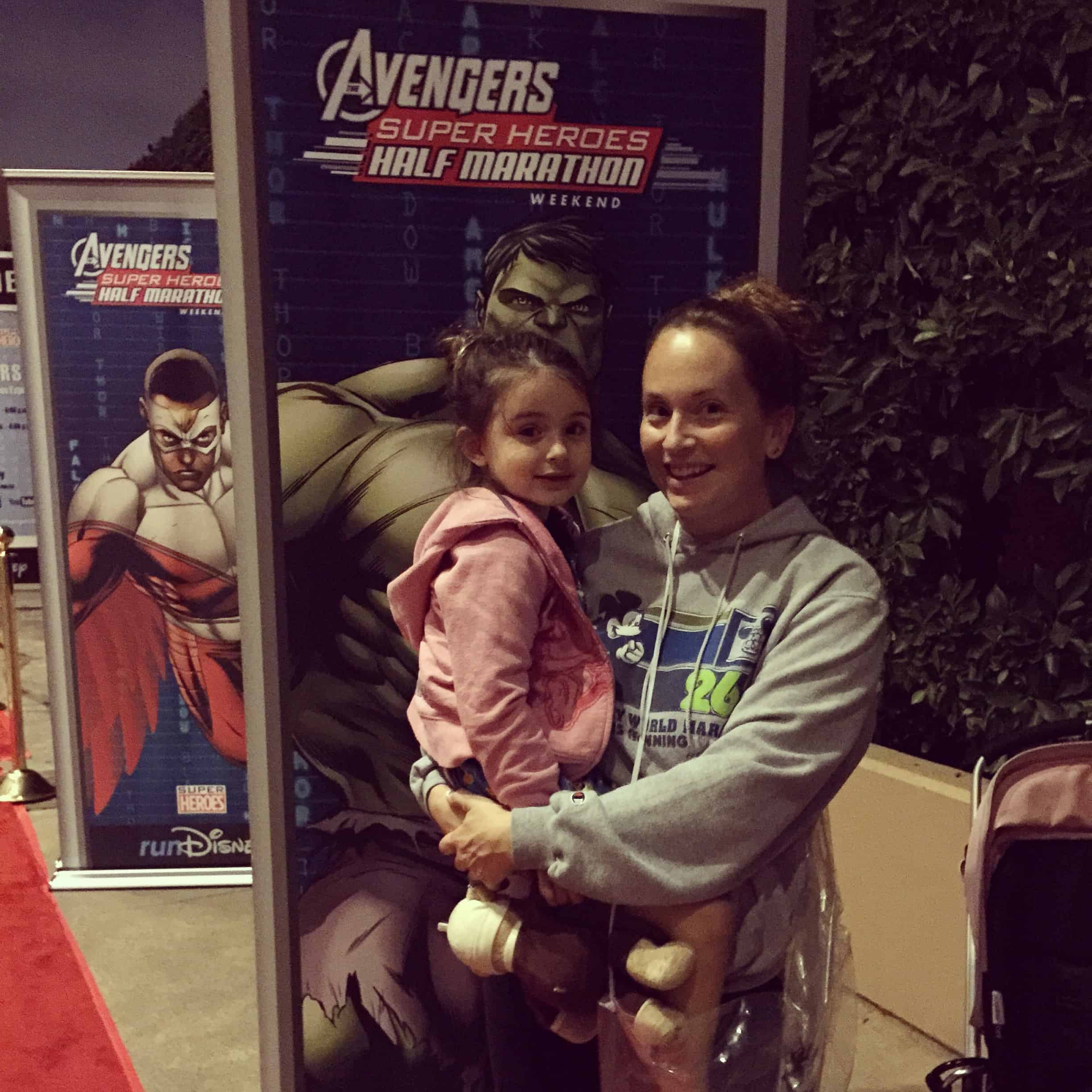 The race started at 5:30am.  Pretty brutally early for a 5k, but on the plus side the Starbuck’s at Downtown Disney opened up at 4am, so at least I had coffee in me. 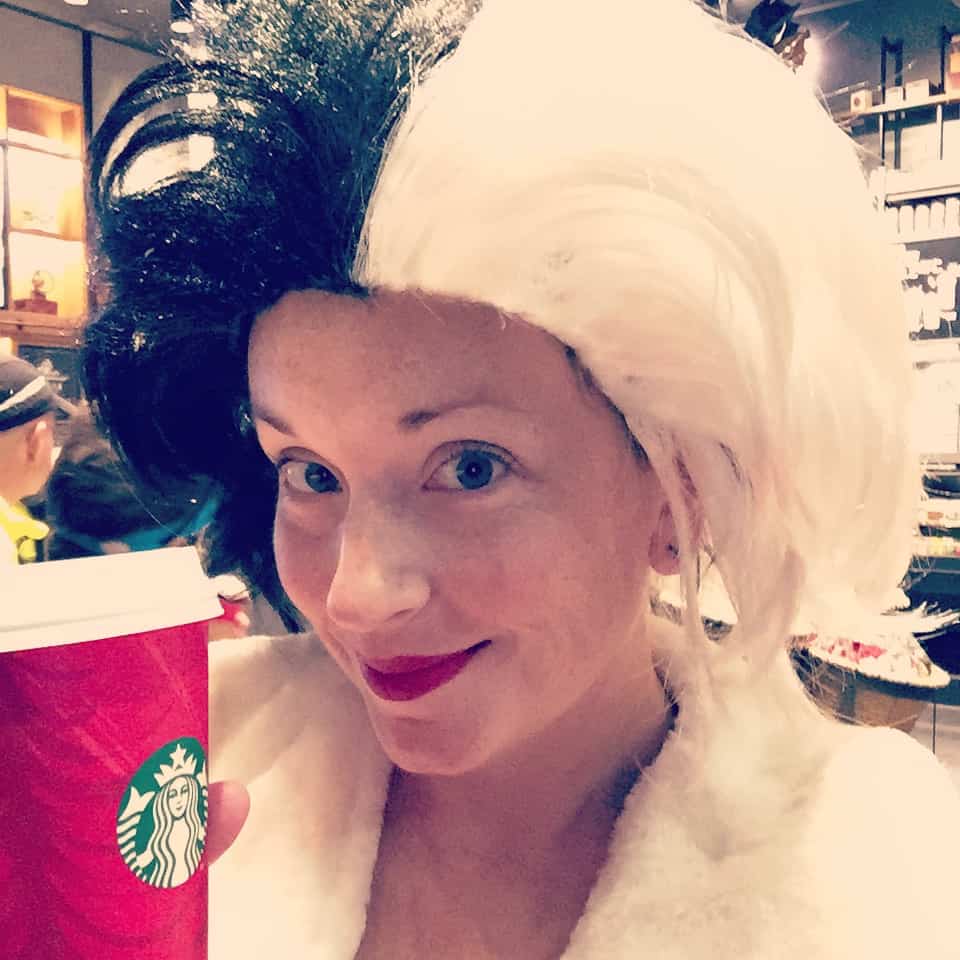 I found my friend Jindy who blogs at Flowers Croon.  She was dressed as the Joker.  Super fun to be the two villains in corral A. 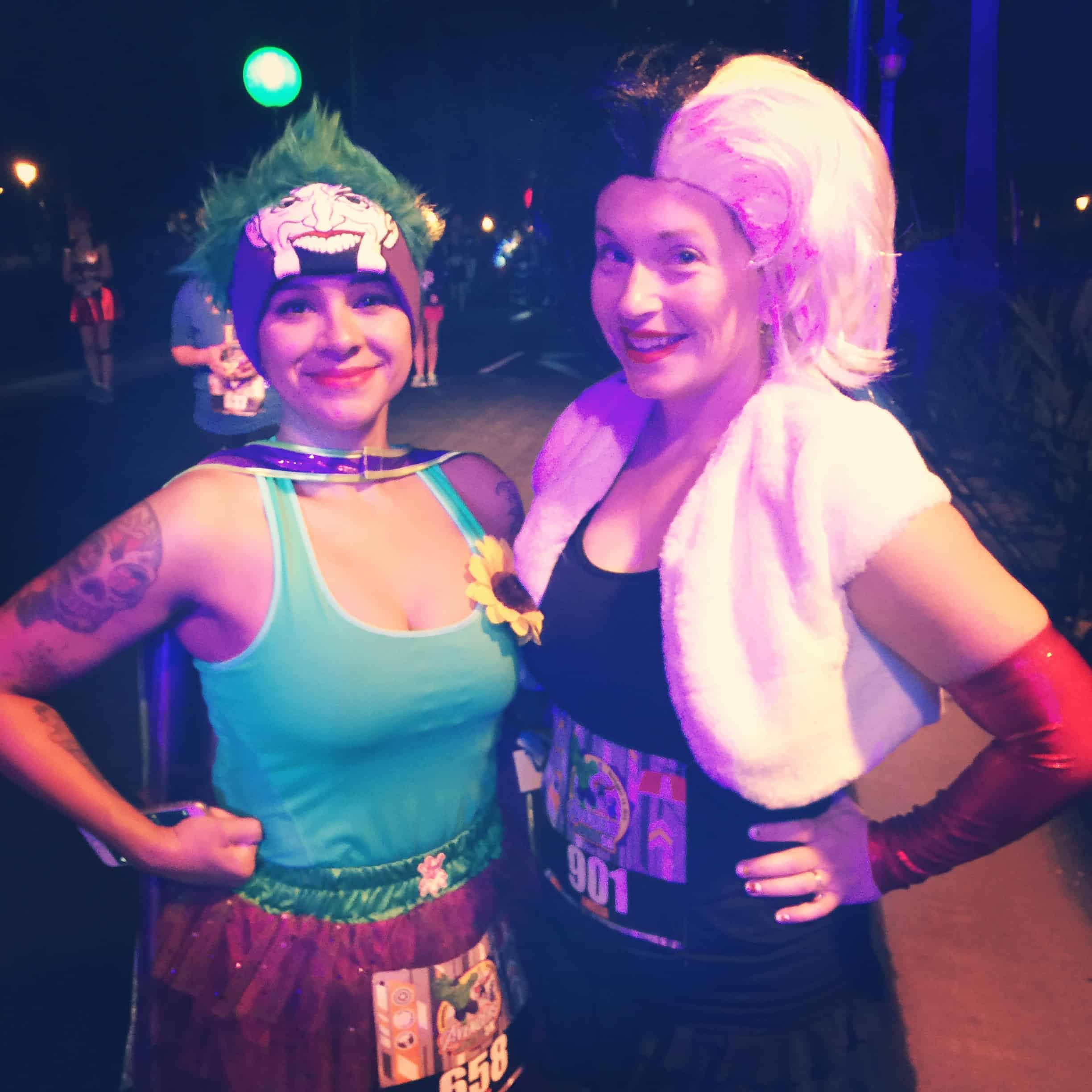 Once the race started we made our way into California Adventure.  I took pictures with Lightening McQueen… 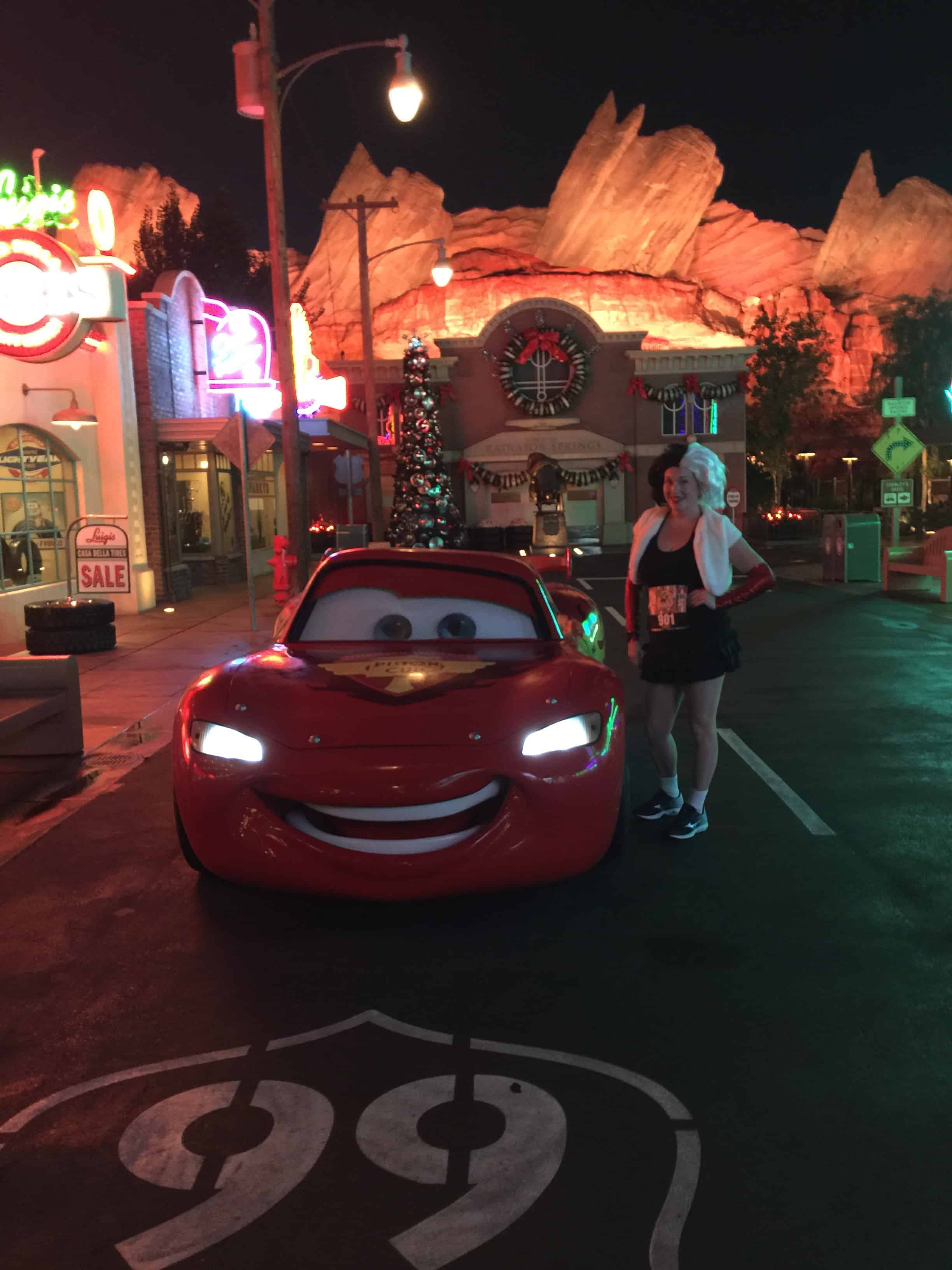 and Mater.  Black Widow had a huge line so she was the only character I skipped. 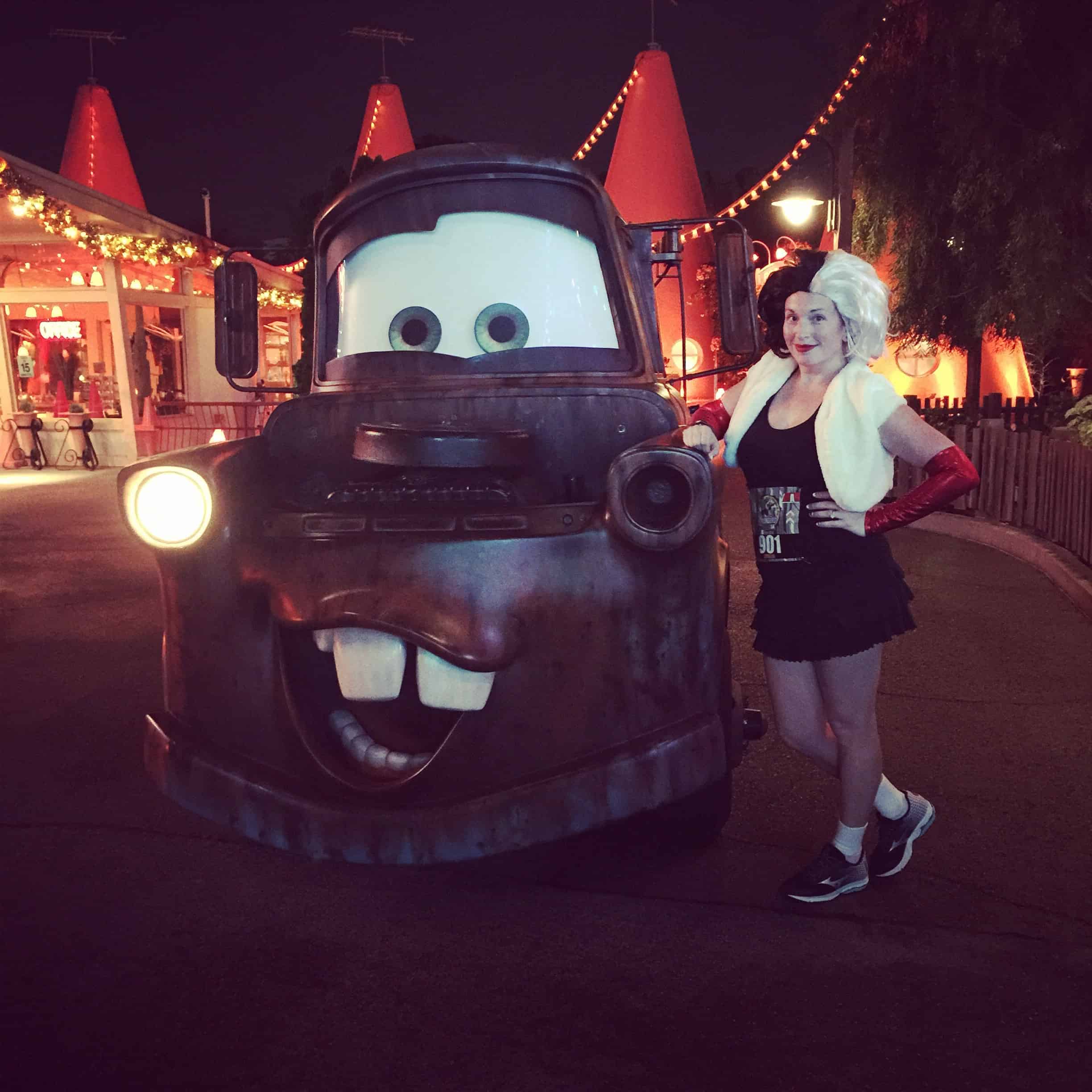 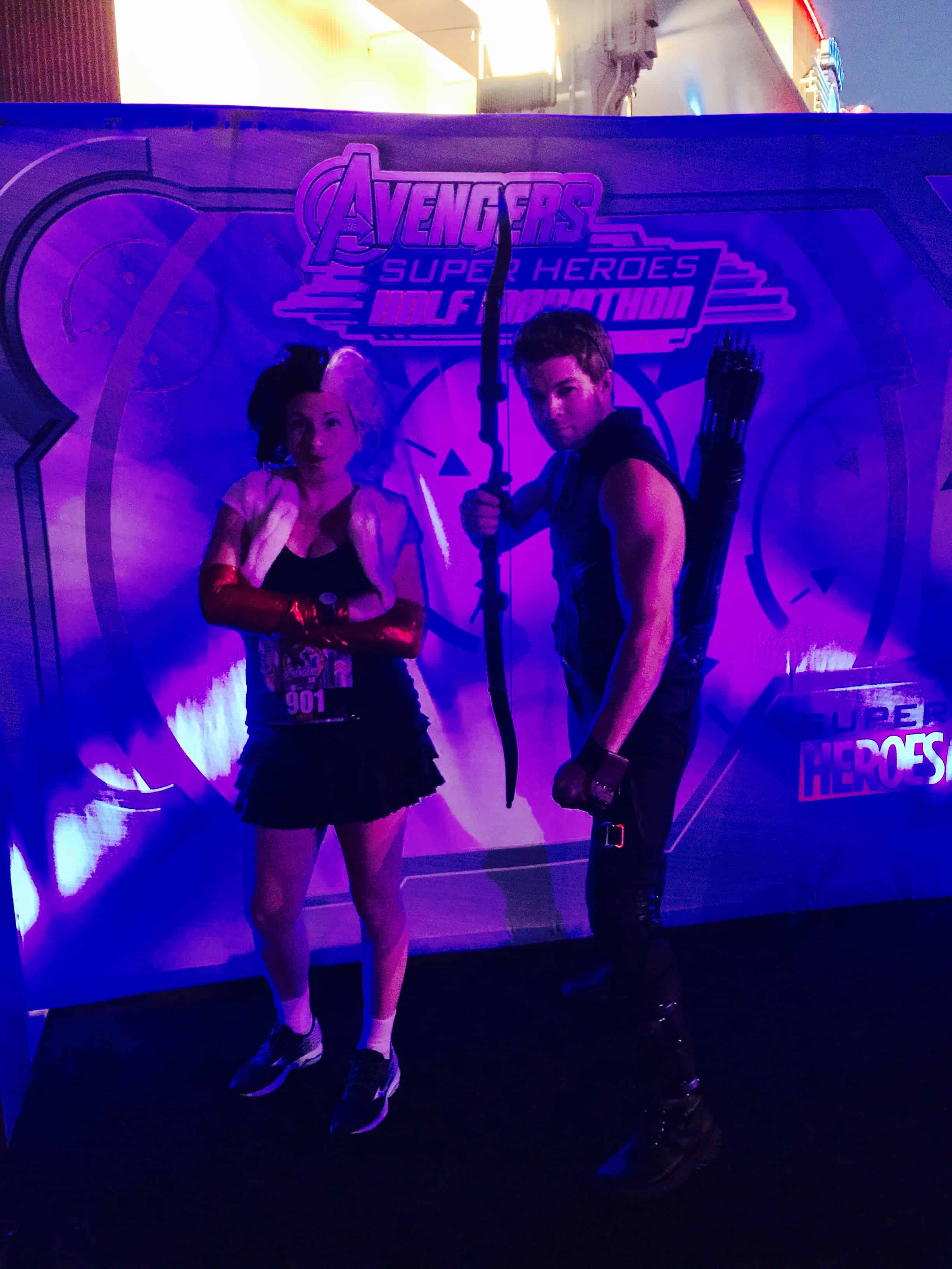 I had to stop for a selfie when we entered Disneyland.  The wig still creeps me out a little when looking at the pictures.  It is pretty crazy looking. 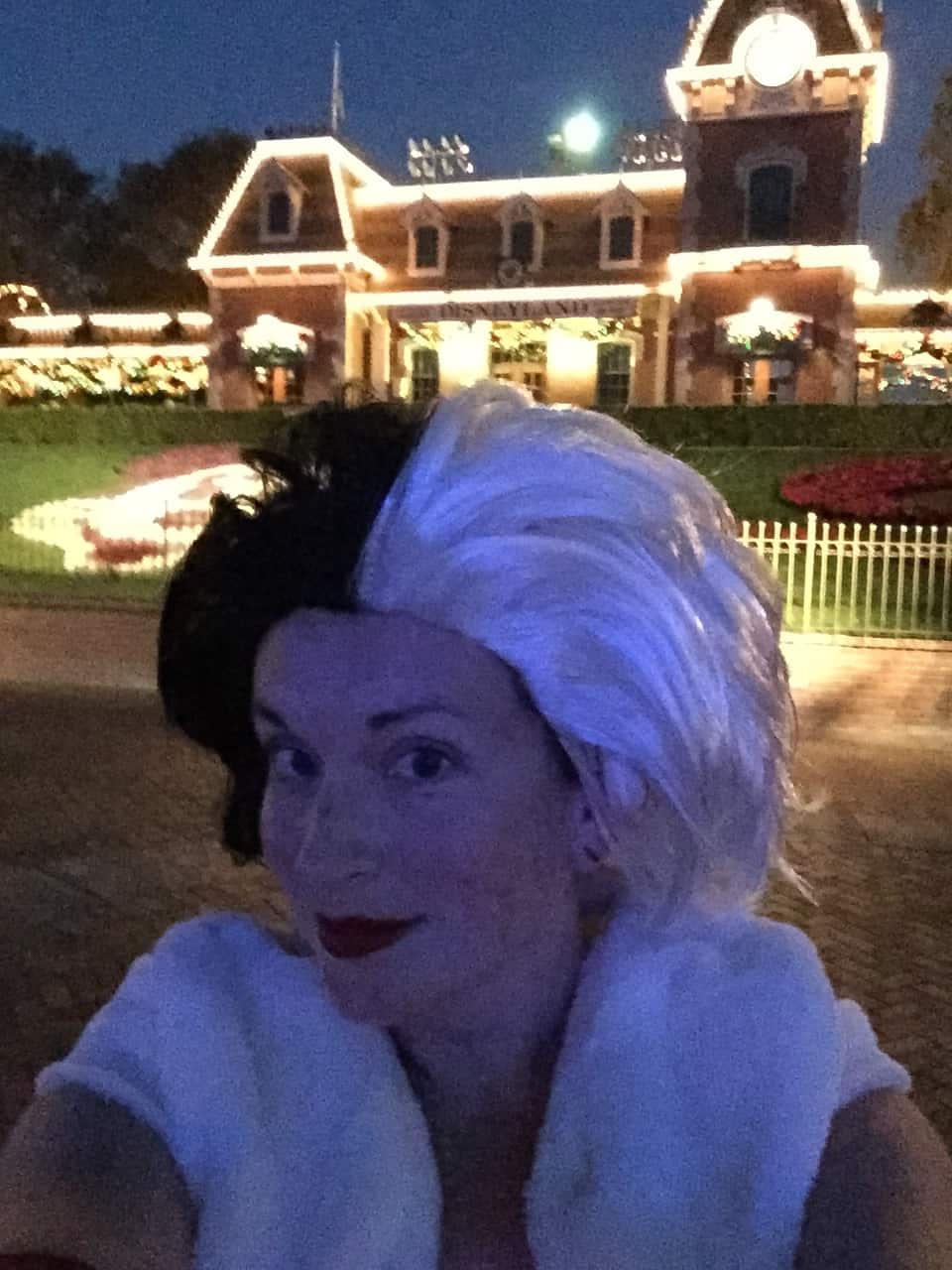 Mickey and Minnie were on Main Street.  Loved seeing both of them out and in their traditional outfits.

And of course I had to get a picture of Cruella and the castle. 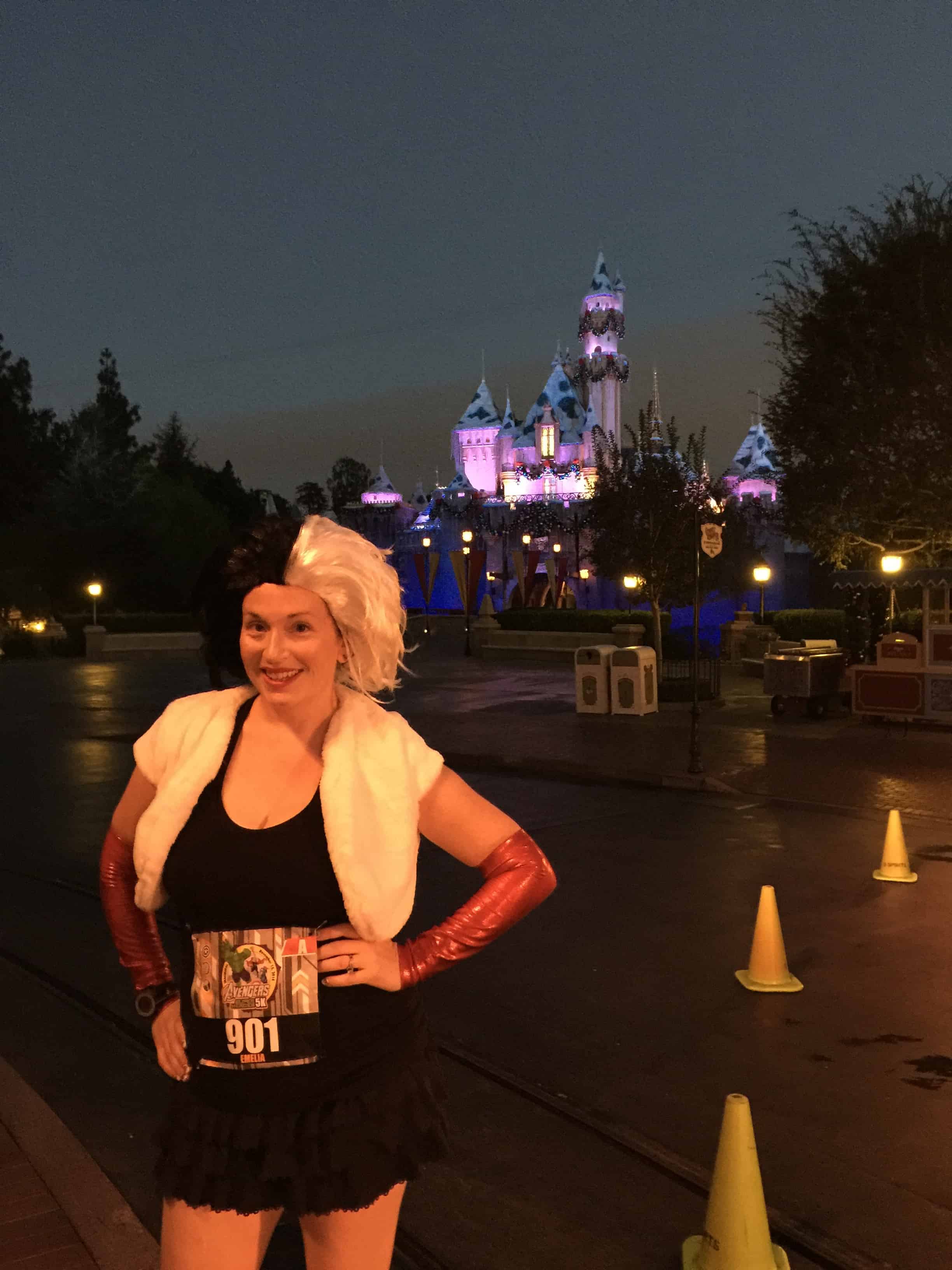 Thor was right by the Matterhorn and I now have a new Super Hero crush. 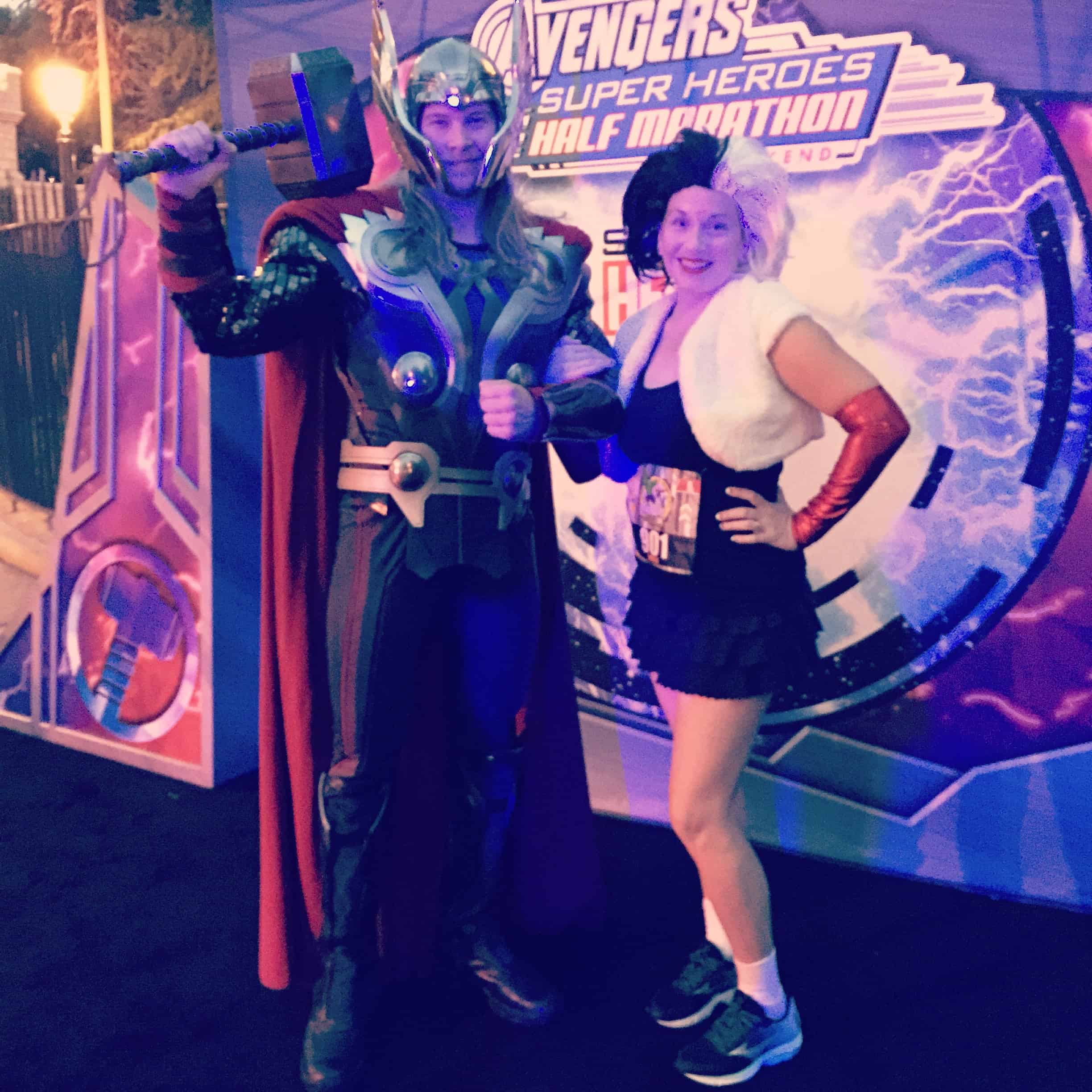 A little random, but Alice, White Rabbit and the Mad Hatter were out in Fantasyland. 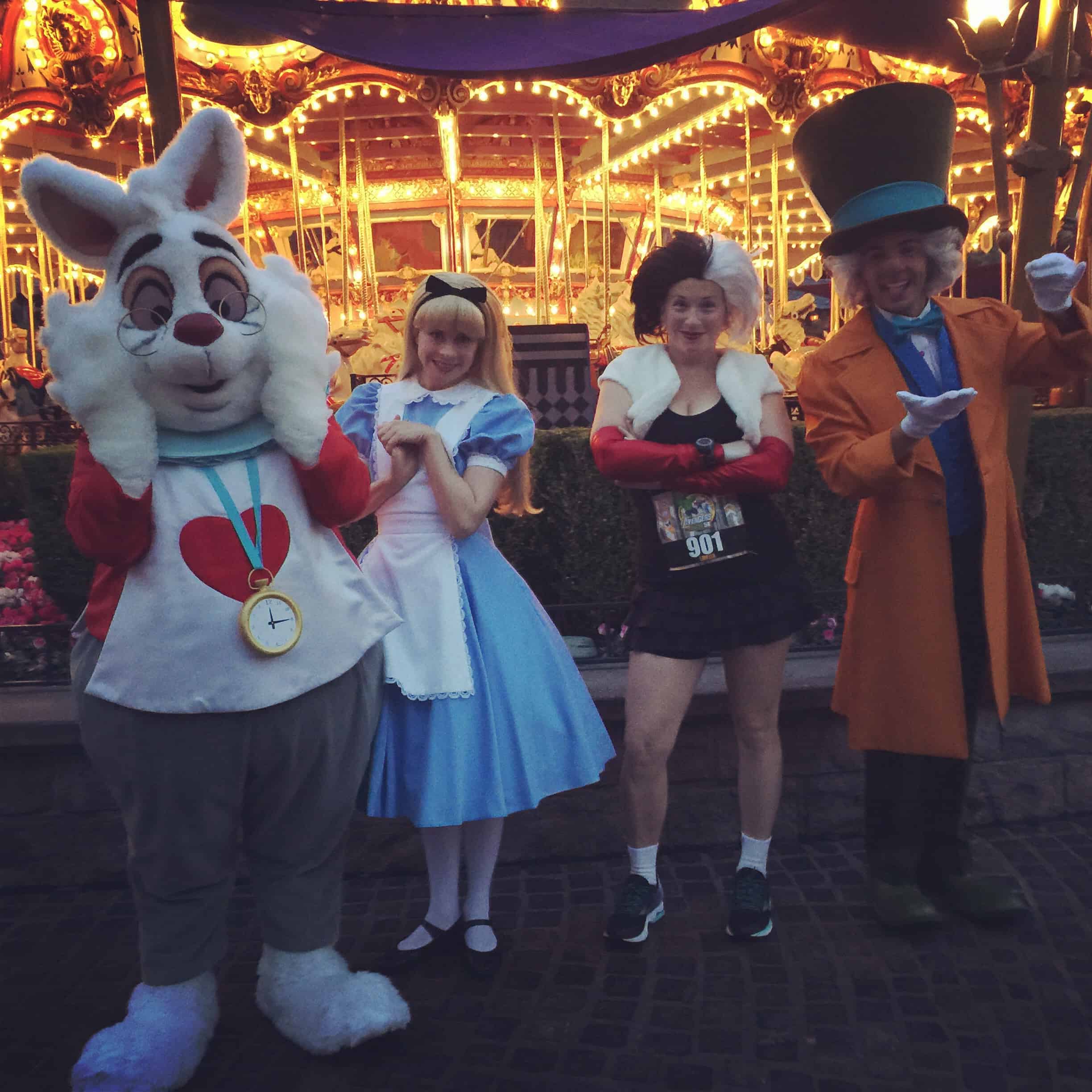 Last but not least, Captain America was out in Frontierland. 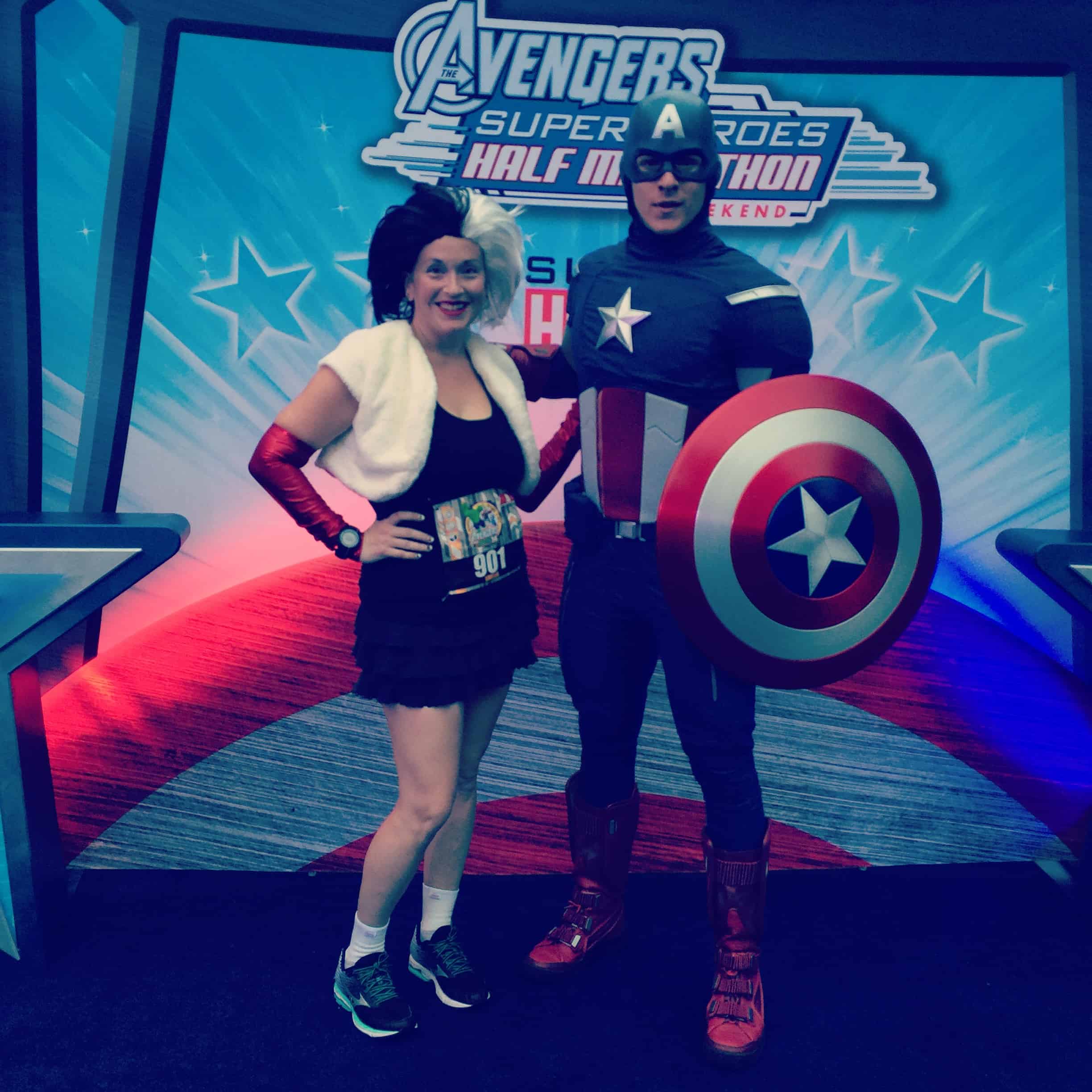 The lines for the Avengers characters were the longest I’ve seen for any race.  I basically sprinted from character to character.  Had I not stopped I would’ve ran around a 24 min 5k.  That said my 5k time was around 1 hour 15 min.   They actually closed all the character pictures line around 6:30am while I was in line for Captain America.  If you were already in line you could wait and take the picture, but they wouldn’t let anyone new in line.  My advice would be to mentally pick which character you want the picture with ahead of time and run until you find that person so you can get the picture. 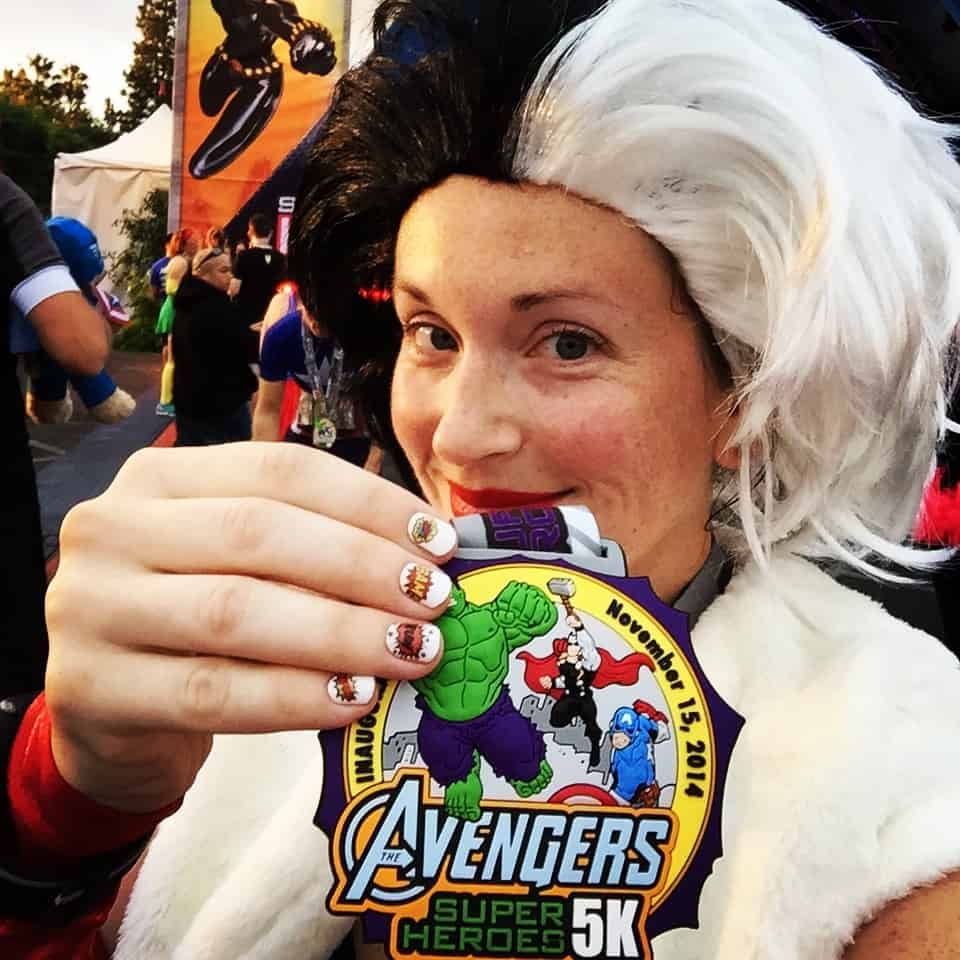 I LOVED this 5k.  The amount of characters out was great for a runDisney 5k  The course was almost completely in the parks and was a ton of fun.  I highly recommend the Avengers Super Heroes 5k, even if you aren’t a huge Avengers fan.

Did you run The Avengers Super Heroes 5k?