The royal wedding 2018 date is this Saturday, May 19th.  Prince Harry will marry Meghan Markle at Windsor Castle in England.  Did you hear that?  That was the collective sound of women everywhere crying a little at Prince Harry leaving bachelorhood behind and settling down.  Don’t get me wrong, Meghan seems great and will be a fantastic addition to the royal family, BUT naked pool playing Vegas Prince Harry was pretty fun to hear about.  I guess like us all, he too has grown up. 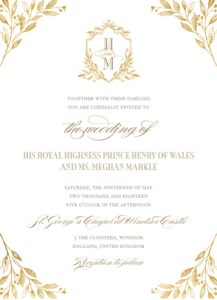 When I was a little girl I had Princess Diana paper dolls.  I loved those paper dolls.  I played with them until they pretty much disintegrated.  I always thought Princess Diana was incredible.  Jump ahead a few years, when I was 16 my dad died of colon cancer.  He passed away on August 23rd, 1997.  Princess Diana died August 31, 1997.  Mother Theresa died September 5th, 1997.  I remember a colleague of my dad’s saying to me that all great people die in 3’s.  For some reason that always stuck with with me and I envisioned my dad sitting around drinking tea with Princess Diana and Mother Theresa.

I remember watching Princess Diana’s funeral live on television.  It was the middle of the night at my home in California.  I couldn’t sleep because my dad had passed away the week before and I just sat on the floor in my living room bawling, watching Prince William and Prince Harry have to walk down the street behind the carriage carrying their mother’s body.  My insides felt like they were raw and scrubbed with steel wool from what I had gone through with my family the previous 6 months and now I was watching these poor boys my age and younger have to do it in such a public arena.  After that I always felt like Prince Harry deserved a little bit of a hall pass to be a little crazy.  Isn’t that what we all want to do to forget about tragedy?

I wish Prince Harry and Meghan Markle the best of luck on their future.  I have no doubt that Princess Diana would be proud of the man he became.  I also know that my dad would be proud of the woman I became and that is the best way to honor them and live your best life.  Cheers to the new couple…and of course I can’t wait to see the gown!

Will you be tuning into the royal wedding this weekend?