Register to run the 2016 Los Angeles Marathon and use code EMELIA16 for a discount!

I will start by saying that the ASICS LA Marathon exceeded ALL of my expectations.  I feel like this race doesn’t get the credit it deserves.  I decided pretty last minute (a week and a half) before the race to run it.  I ran as a charity runner for Marathon Kids. I live roughly 6 hours north of LA.  We made it a quick trip.  My husband, 4 year old, and I drove down Saturday straight to the expo to get my bib and drove home right after the race (and a shower).

The 2015 ASICS LA Marathon happened to fall on a day of record breaking heat.  I knew this going into the race and worked on my hydration all week leading up to it.  If you aren’t familiar with LA, but have always wanted to visit this is a GREAT way to see the city.  The course passes every landmark that you would want to see.  If you are a CA native, this is an awesome race for the same reason.  How often do you get to run the streets instead of sitting in traffic on them?  The race starts at Dodger Stadium and finishes at the ocean in Santa Monica.  They have shuttles that take you from Santa Monica early morning to Dodger Stadium.  I got on a shuttle at 4am and it was already 70 degrees. 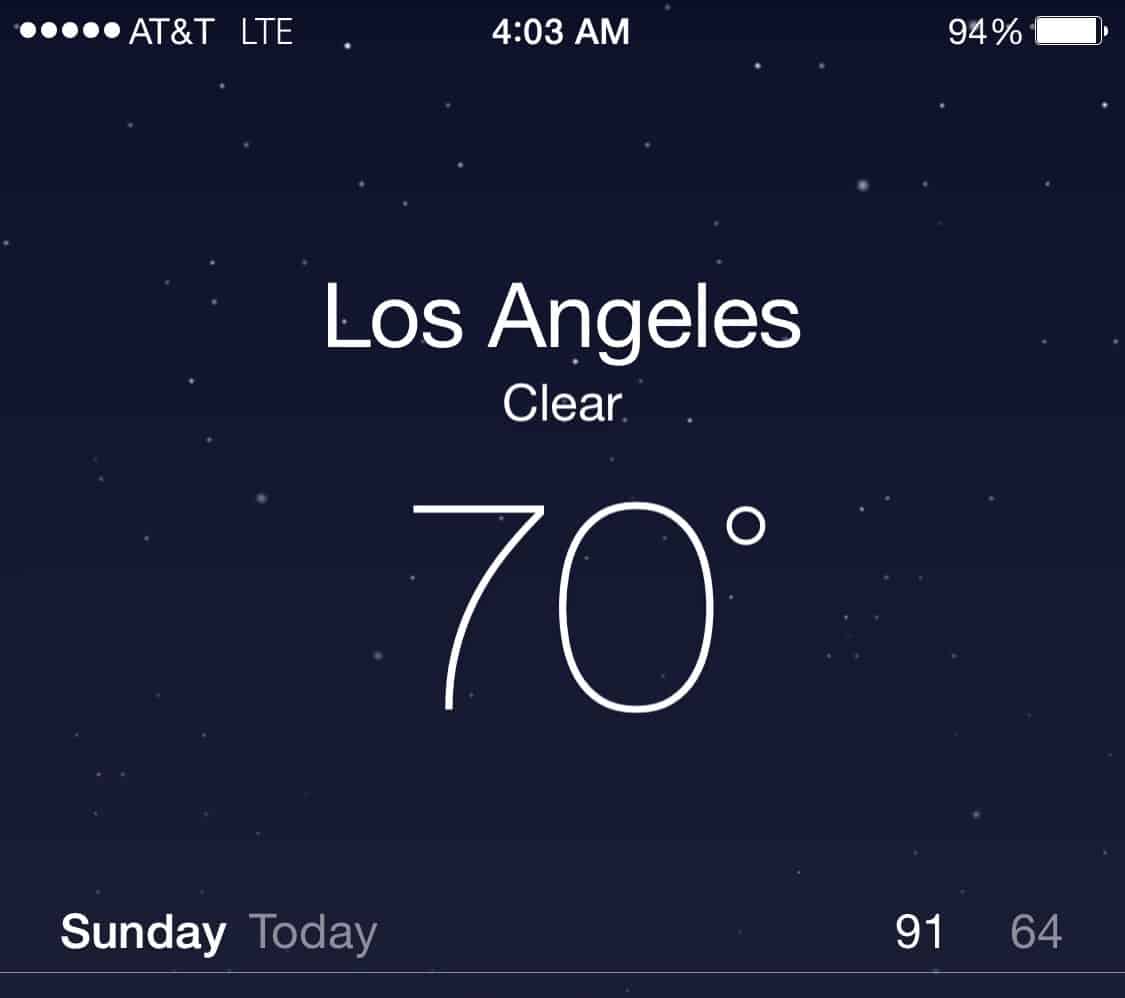 I got to hang out with Linzie, who blogs at Sharp Endurance, and my Tam who is also an INKnBURN ambassador before the race.  I love running friends!  They make pre-race waiting SO much better!!!  I was rocking my INKnBURN Flutter tank, Sparkle Athletic white skirt, Headsweats visor, and my Newton Running shoes. 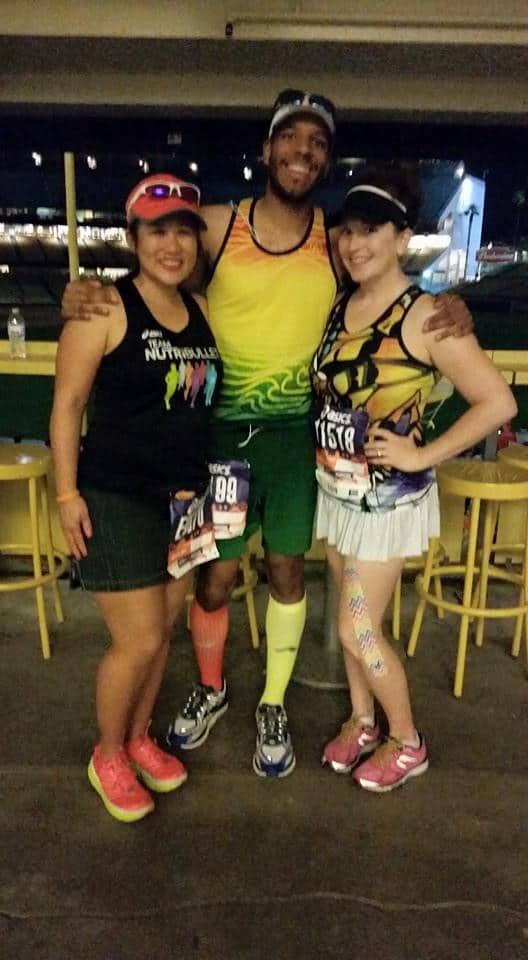 The race is 26,000 runners.  Corrals are done a little different.  They have some seeded corrals for runners with proof of time under 4:30 and the rest of the field is in an open corral in the back.  With the exception of the elite runners, the corrals basically all go off at the same time though.  This made for a very crowded 4-5 first miles in my opinion, but it was nice not having to wait a long time between corrals. 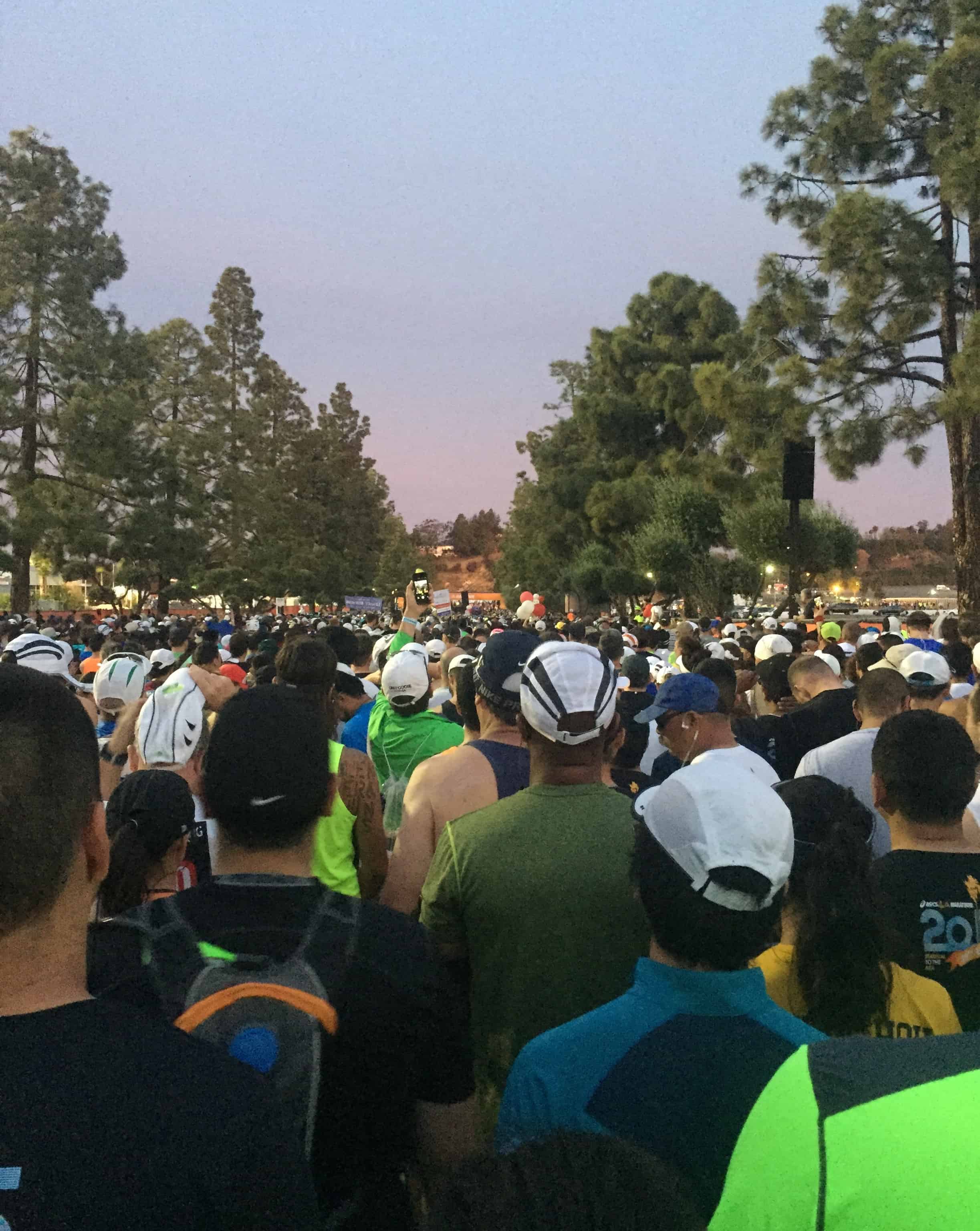 Once the race starts we headed out of Dodger Stadium. The course heads makes it’s way towards downtown LA crossing under the arches of Chinatown. 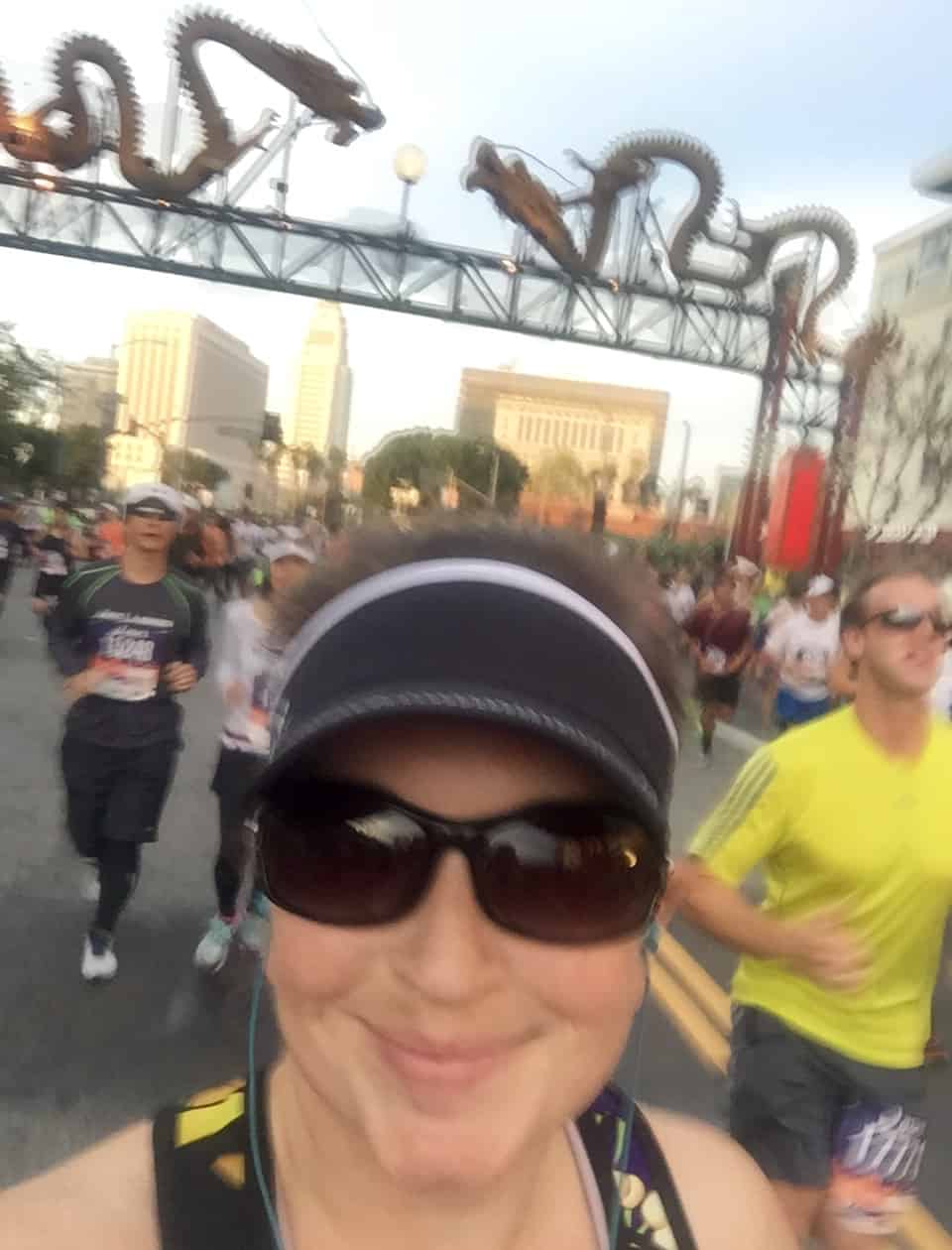 The biggest hills on the course are in the first 7 miles and mainly downtown.  You run past the Walt Disney Concert Hall which is a treat.  I love that building. 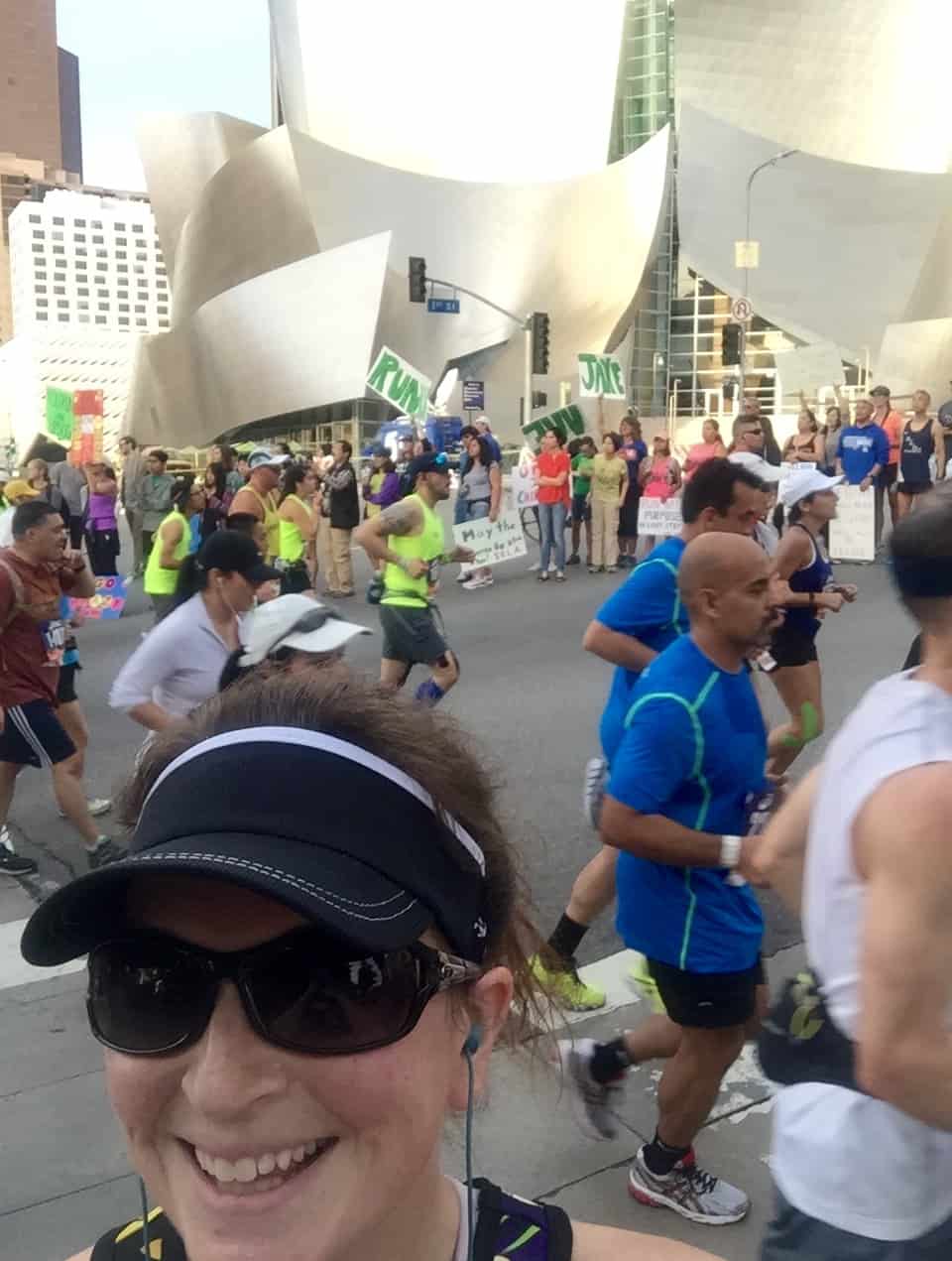 You get to run on streets that you probably will recognize even if you aren’t from the area, like Sunset Blvd.  We ran through Hollywood and passed by the El Capitan Theater. 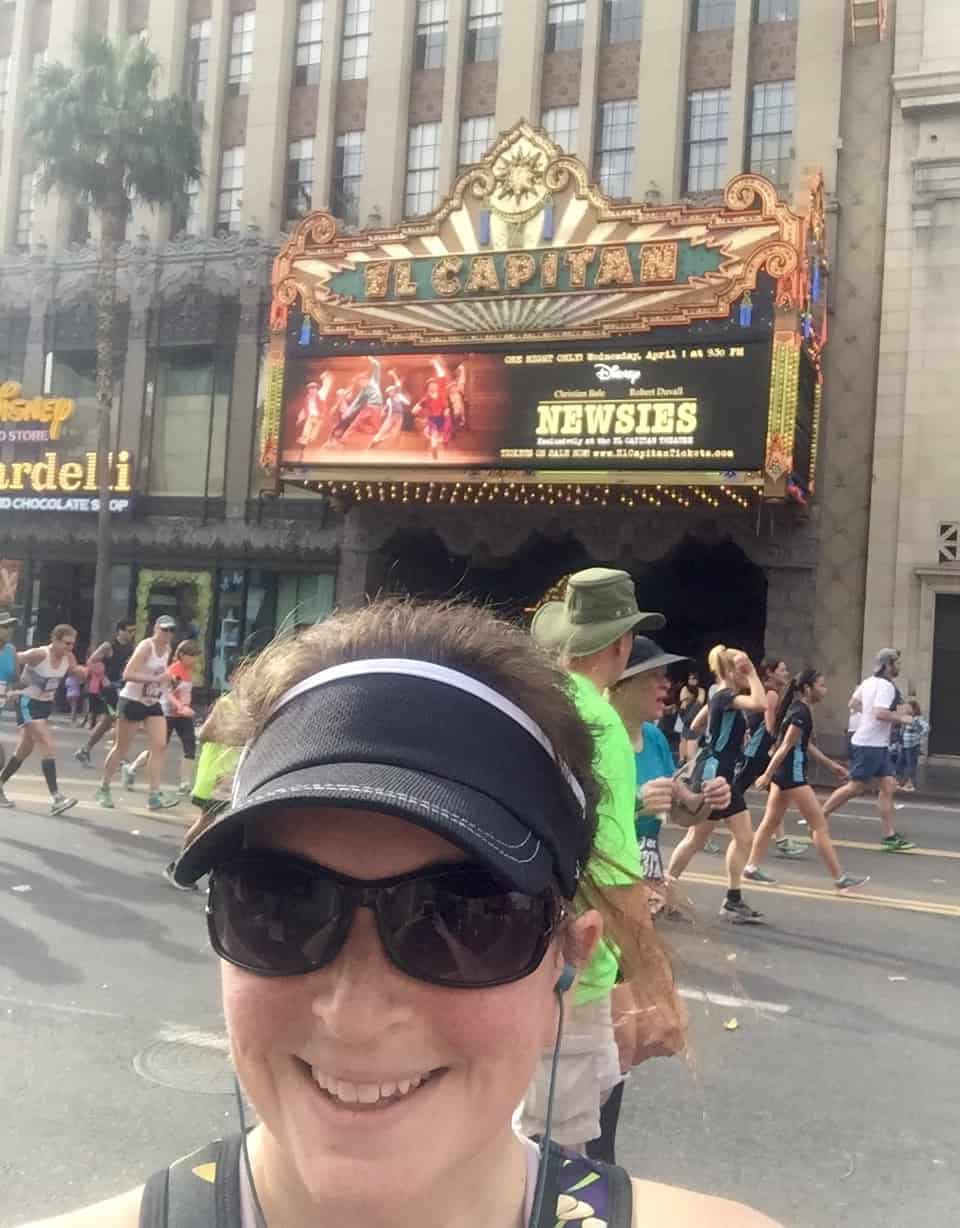 Across the street is Grauman’s Chinese Theatre. 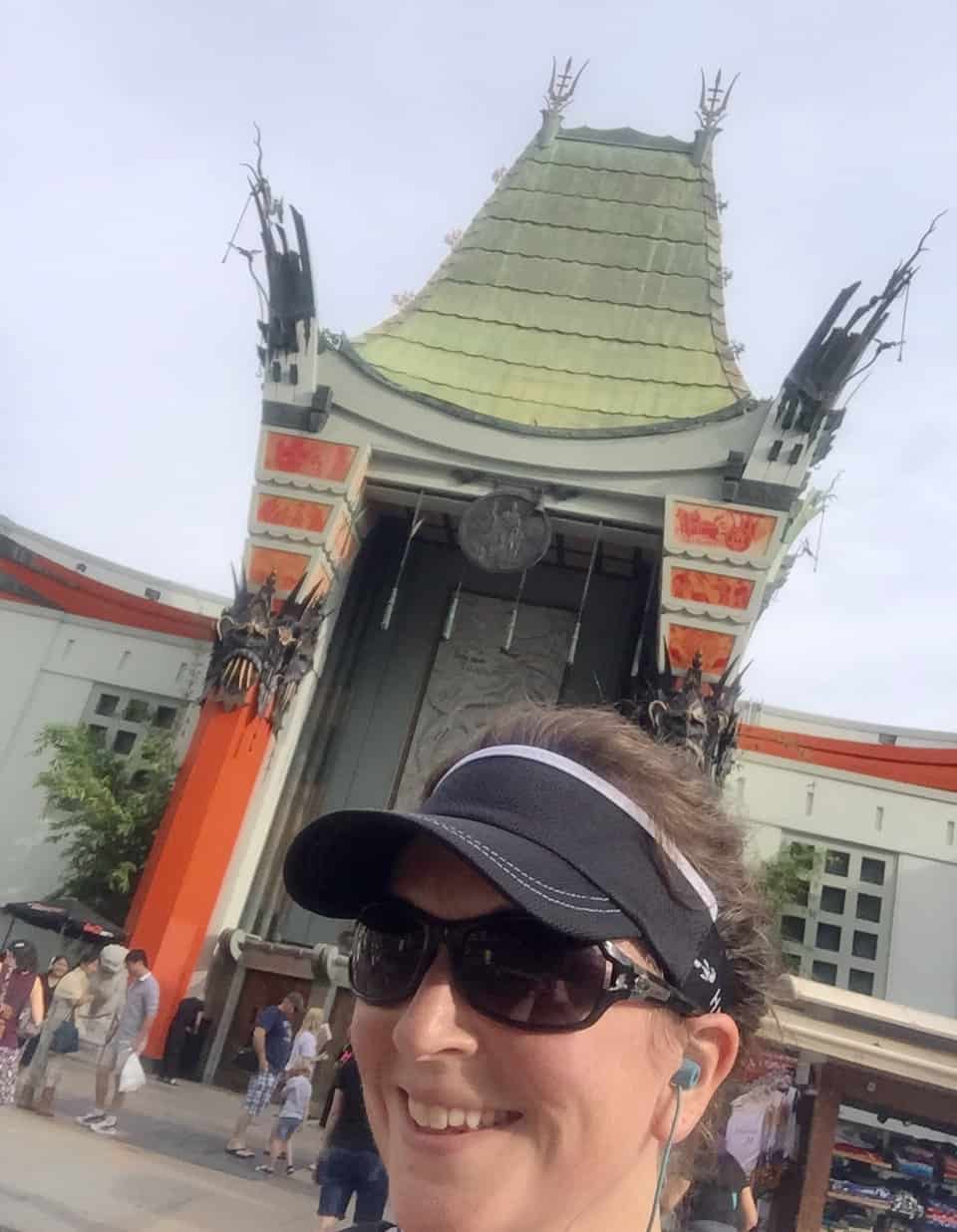 And next to that is the Dolby Theatre (formerly known as the Kodak Theatre) which you may recognize as the home of the Oscar’s (Academy Awards).  In my opinion, I’ve always thought these places look way smaller in real life then they do on TV.  In front you can see the Walk of Fame. 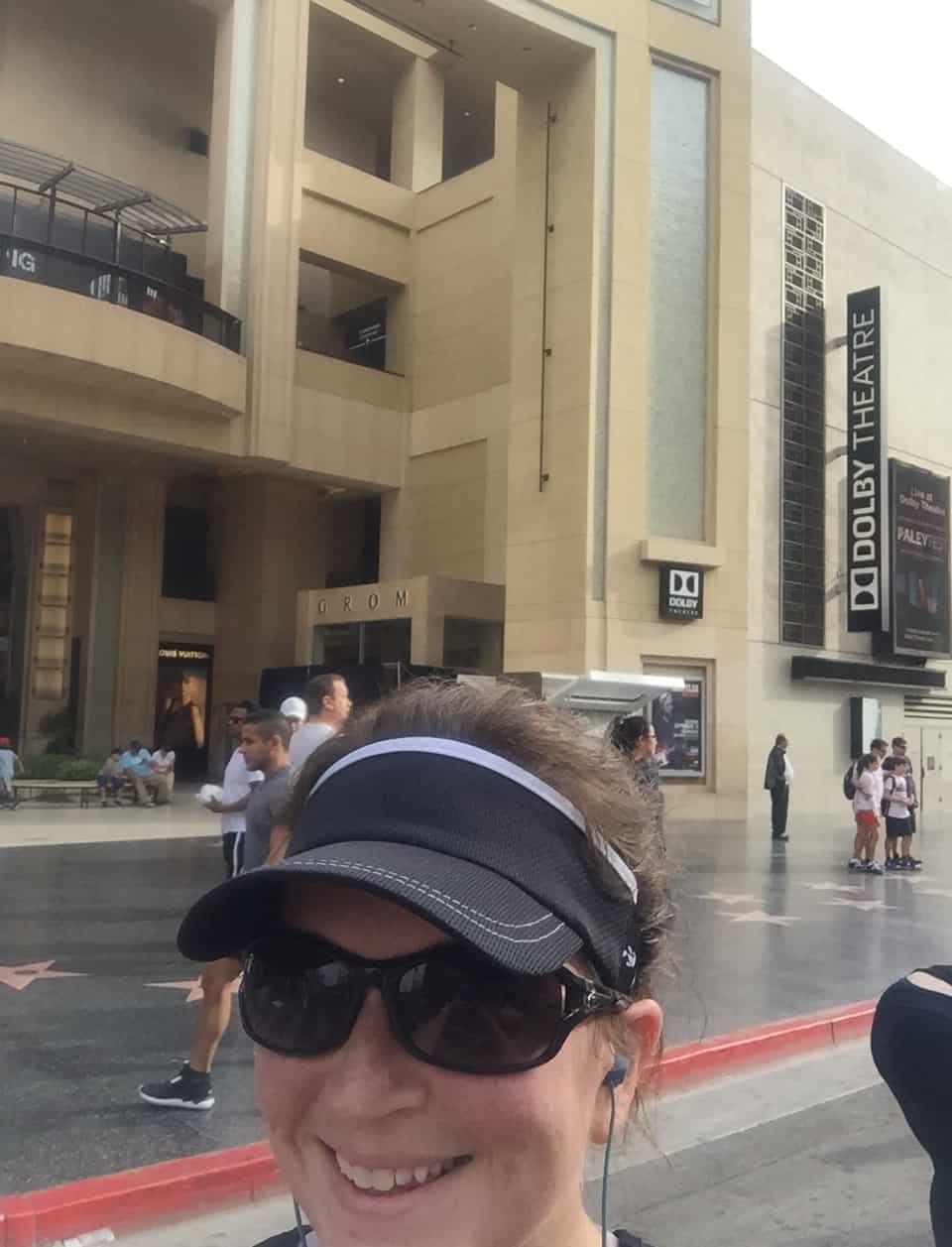 Just passed the half marathon mark I found a great man with a bowl of lollipops.  Score!  Here is where I will get mushy.  The spectators along the entire course were absolutely amazing.  There was an abundance of candy, pretzels, oranges, water, sunscreen, icy hot, bananas, licorice, gatorade, Fig Newtons, people with hoses, bowls of ice to help cool us down, and one even said to have beer, but I didn’t investigate to see if that was true.  The sunscreen saved me.  That was my big concern for the race with the heat.  I put sunscreen on before the race, but with all the sweating I knew it wouldn’t last.  Around the 15 mile mark I stopped and this AWESOME lady sprayed me down with sunscreen.  I could’ve kissed her I was so happy.  She also had Icy Hot and sprayed my knees and ankles for me.  People like that lined the WHOLE course.  It almost brought me to tears several times. 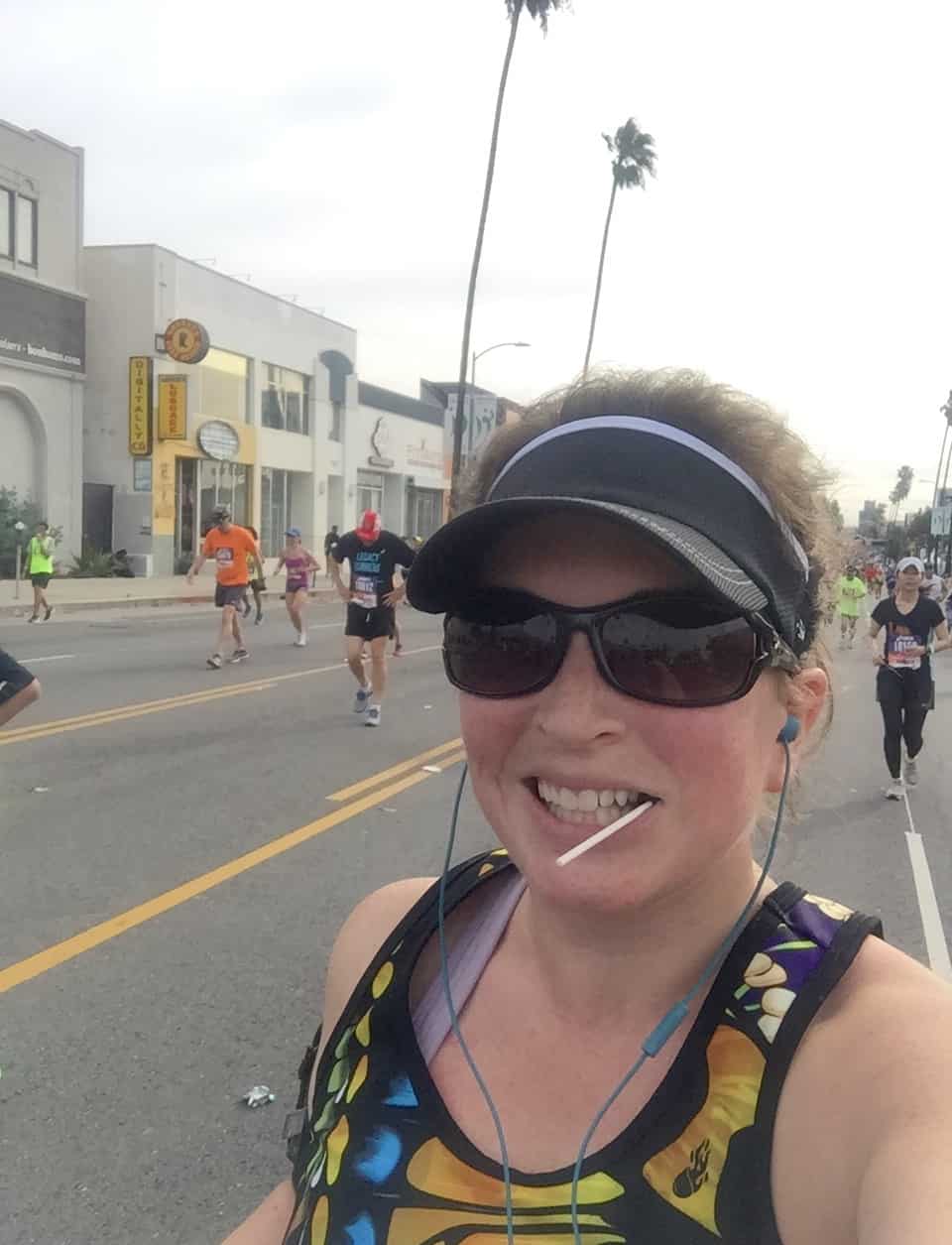 At mile 16 we hit Beverly Hills. 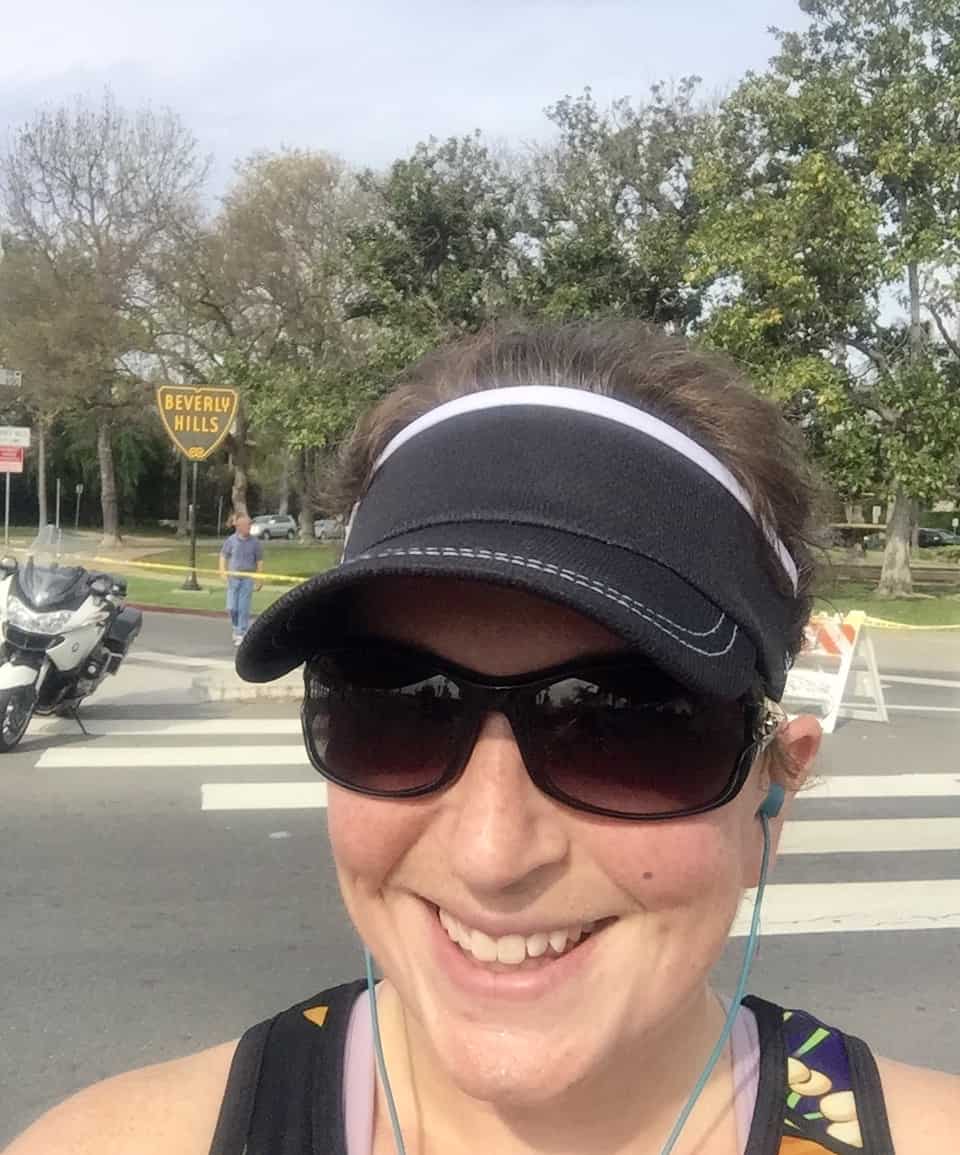 I was actually surprised that Rodeo Drive didn’t have more spectators on it, but I think with the way the course was set up it was hard to get to the street to be a spectator?  I will give them the benefit of the doubt and go with that reason. 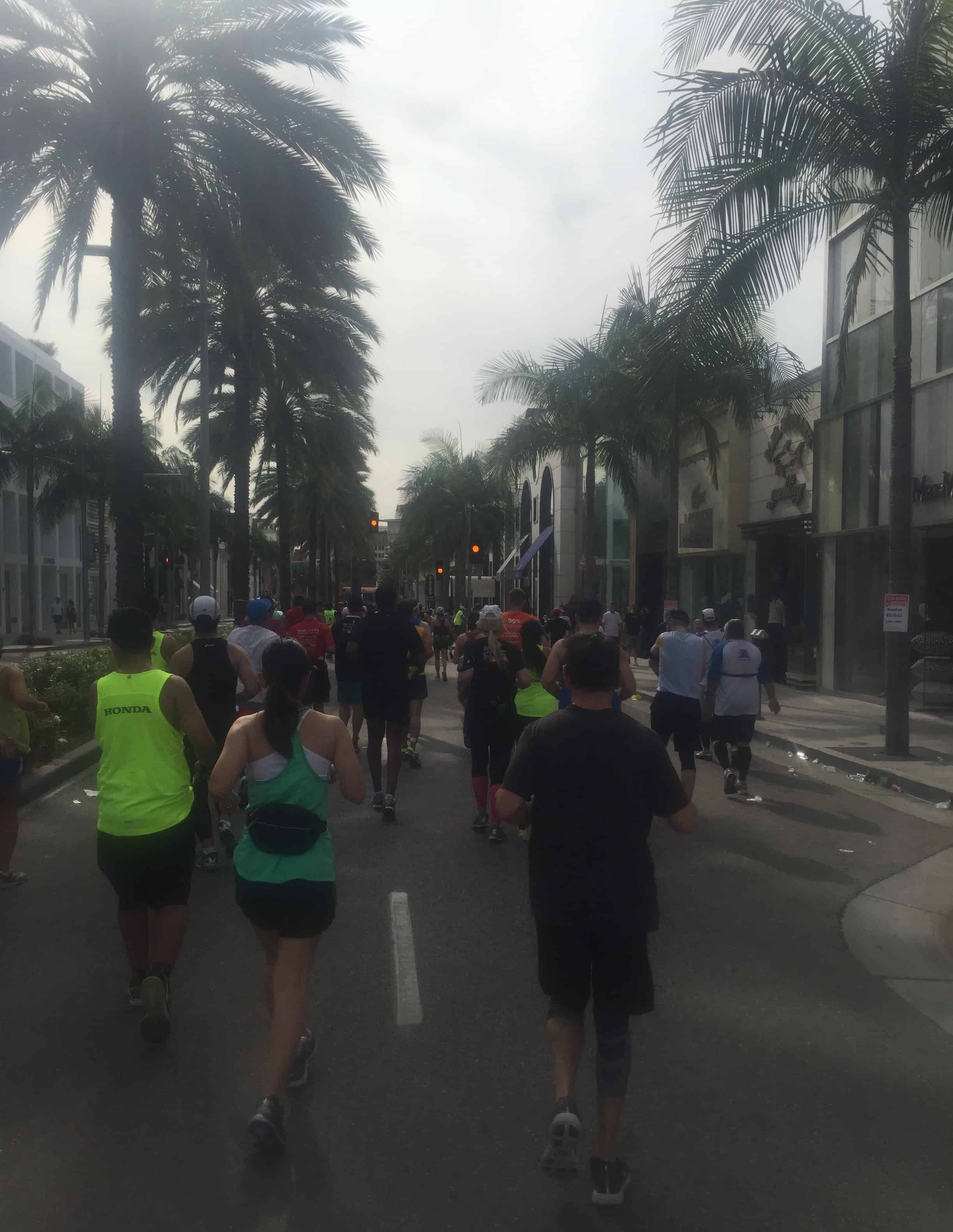 The mile 17 marker was on Rodeo Dr.  I always love mile 17 because that means there is only single digits left, 9.2 miles! 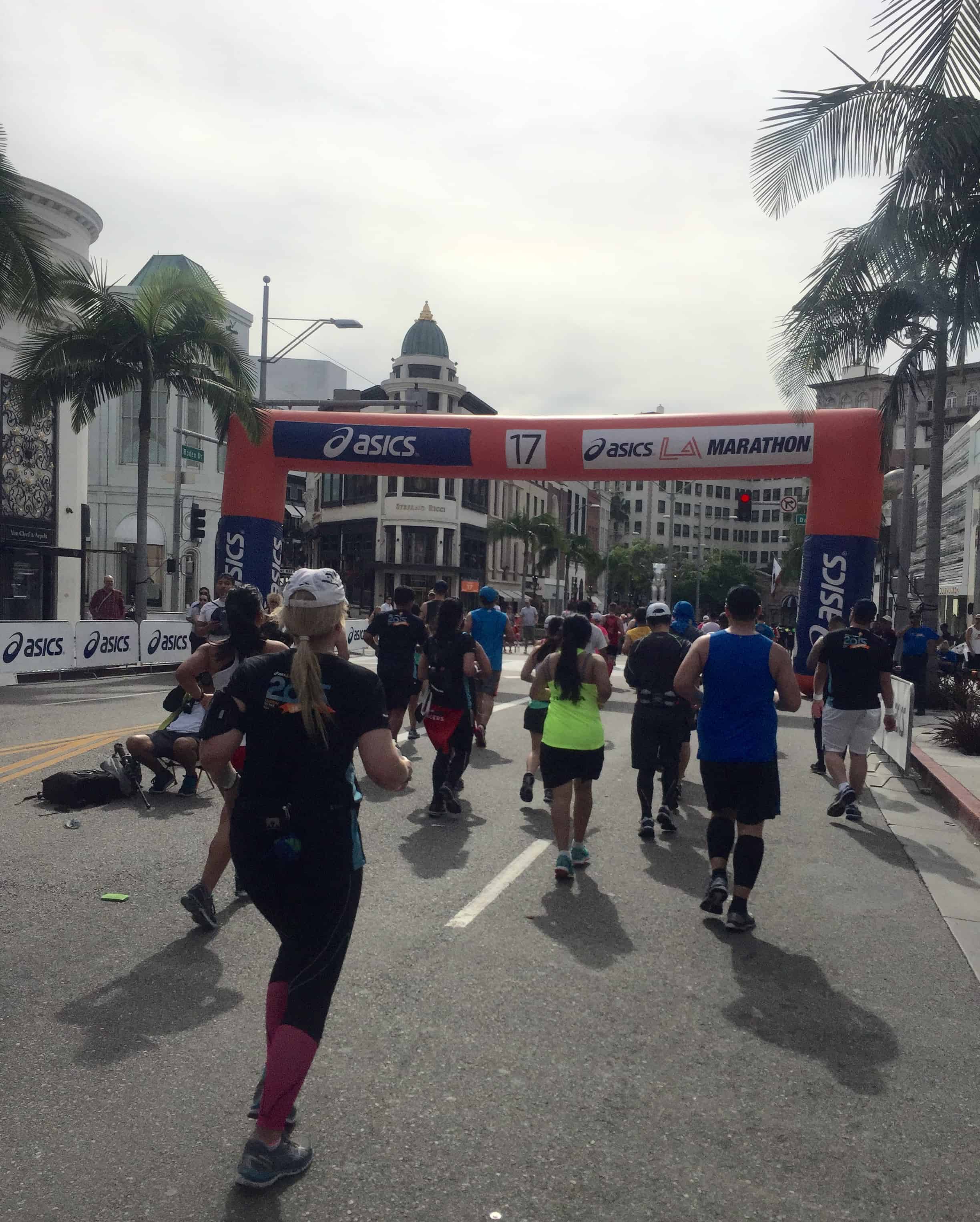 After Beverly Hills we made our way towards the big VA Hospital.  Some patients in wheelchairs were out in the shade with a few doctors cheering us on.  That was really awesome.  The course then takes you through Brentwood and down San Vicente, which may I add is down hill for the last 2-3 miles.  GREAT COURSE!  I really truly, knowing the city, couldn’t map out a better course to run if I tried.  It isn’t flat at all, but it is entertaining and the downhills more than make up for the uphills. 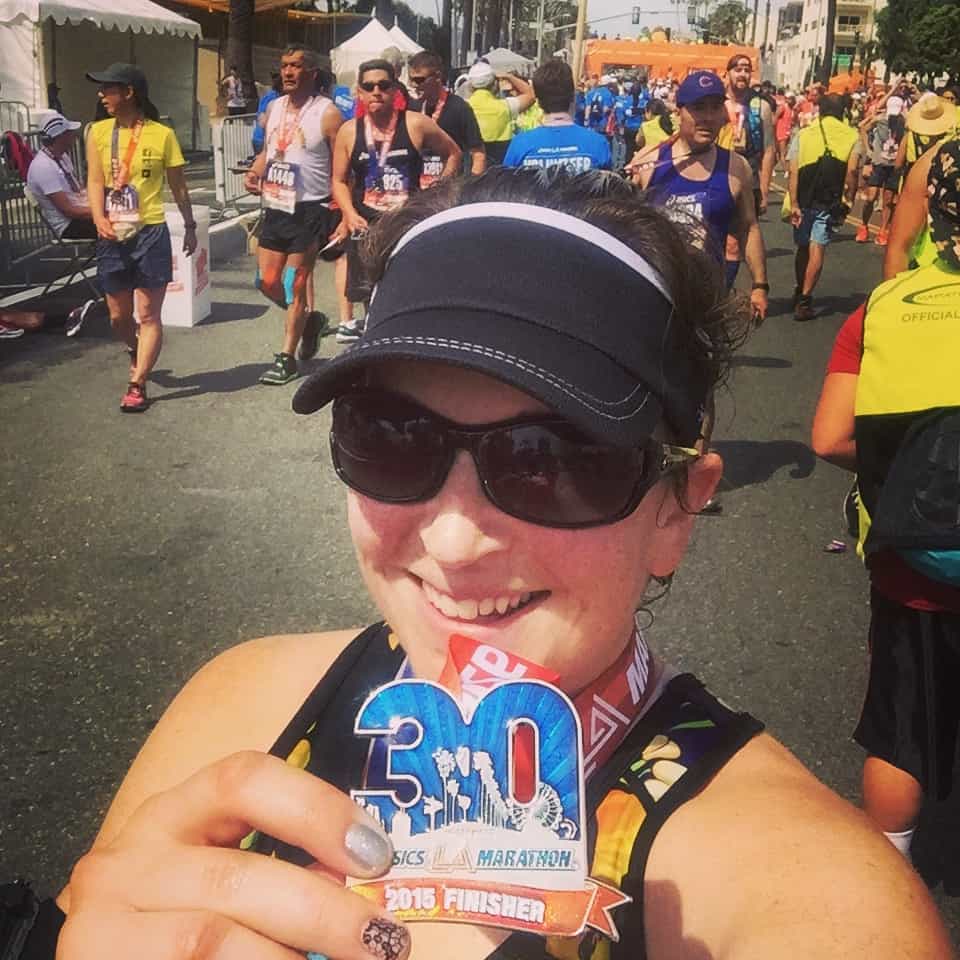 The finish line was hot, but there were cold towels, misters, ice, water, and plenty of medical staff helping all who needed it.  I LOVED this race.  My plan going into the race was to slow my pace 2 min from my normal marathon pace because of the heat allowing me to walk when I needed. My time wasn’t fast with a 5:36, but I felt great and pretty happy with that for 91 degrees.  A 5:36 time however was in the top 40%.  Over half the field had a finish time after this?!?! That is heat related I’m sure.  Nothing on my body severely hurt, I wasn’t dehydrated, and I had a great time which was my goal all along.  I read the next day that 36 people were taken to the hospital and over 150 were treated on scene.  Heat is no joke.  I DEFINITELY recommend the LA Marathon.  Add it to your list of must do’s! 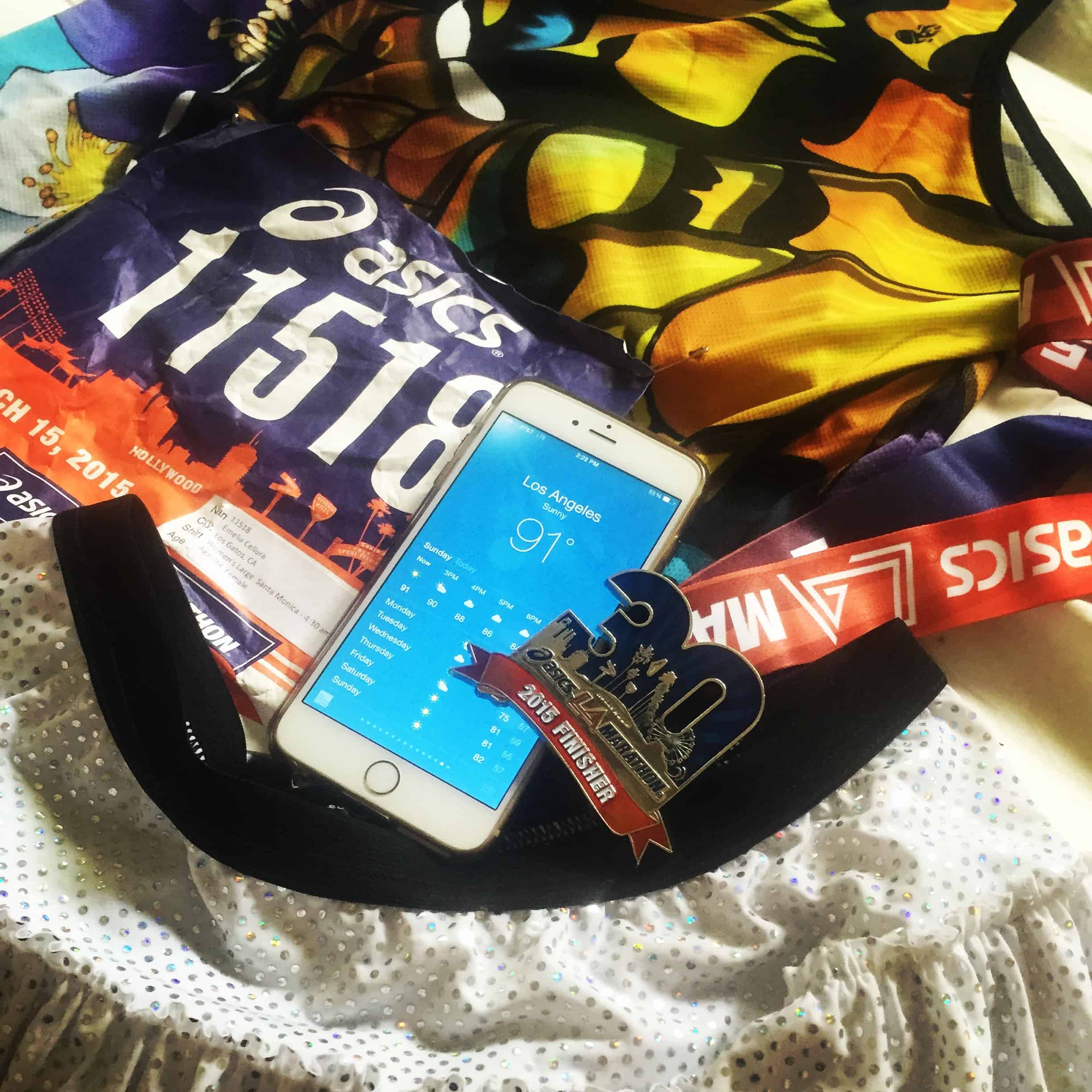 Have you ran LA?

Register for 2016 and use code EMELIA16 for a discount!