After a very very long delay at the airport we made it to Florida in one piece, but it has been raining most of the time since we got here.

Our trip started Friday at 1:00pm pacific time.  We live about 50 min south of the San Francisco Airport, so we figured we would get there early for our 4:03pm flight so we could beat rush hour traffic and get a bite to eat.  We were flying United, which we don’t normally fly.  I am hoping this isn’t normal for the airline.  We got there at 2:00, checked our bags, ate some food, headed to our gate and was told our flight was delayed until 4:45.  Ok, not a huge deal.  At 4:45 they said our plane was here so we lined up to board.  About 10 minutes later we were told that the crew for our airplane was in Los Angeles and was trying to get here.  How did they not know about this ahead of time?  Ok, so we were told it would be a 6:30 departure.  Luckily my 3 year old made friends with a couple of the little girls and was happy playing.  They announce at 6:30 that the crew was STILL in LA and trying to get to San Fran.  Long story short, at 8:30pm our crew finally arrived.  We were suppose to get to Orlando at 12:15 at night.  Instead we got there at 5:00am.  We than had a 2 hour drive out to our condo on the Atlantic coast of Florida.  This is what my husband and daughter looked like sleeping by the time we got to a bed at 7:30am. 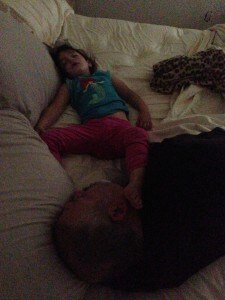 It was a VERY long travel day.  I booked the United flight because it was one of our only direct options and I liked the idea of a fast flight with no stops.  I would’ve been better off with a layover, but we made it safe and my 3 year old was happy.

While in the terminal at SFO waiting we watched as they worked with lots of big equipment to dismantle the Asiana airplane that had sadly crashed there the week before. 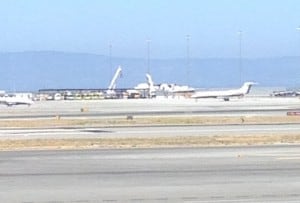 Since being here in Florida I haven’t ran in 2 days due to rain and just being exhausted.  I think tomorrow I might just hit the treadmill.  As much as I love running on the beach when I come here, the rain takes the fun right out of it.

On a site note, we went to the Fort Pierce Chili Cookoff on Saturday and that was fun.  It benefited the Boys and Girls Club.  I’m always happy to support a good cause.  I didn’t plan my strategy very well though because after sampling only 2 I was already full!

We are planning to go to Cape Canaveral and visit the Kennedy Space Center on Tuesday.  I am VERY excited!

What do you do for running when it is raining?  Do you hit the treadmill or do you go out in the rain?