Hello My Name Is Emelia And I Have An Anxiety Disorder

So I don’t talk about this a lot.  When I do I usually joke around about it, but I thought I would write about it more seriously for once in hopes that some of you can relate.  (And by seriously I mean I will still joke a little because that is what I do, but I will discuss in more real terms). I have an anxiety disorder.  It can rear it’s ugly head for various reasons…or sometimes no apparent reason.

It isn’t a weakness, which some people who don’t have this problem think it is.  I don’t get to choose when my anxiety kicks in otherwise I would choose to be strong and never scared or worried.  My anxiety at it’s worst can be paralyzing.  I think being a mom has helped, but also added a whole new level of anxiety. 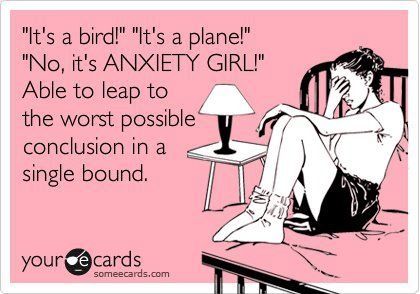 My anxiety often triggers fear…extreme fear in me.  Like in my head I start spiraling in thought and when it reaches it’s worst I am afraid that a Criminal Minds episode type horrible event is just around the corner in real life and I brainstorm how to protect my family, to put it bluntly.  I am afraid of what can happen (key word being CAN).  Not that it is likely or even close to likely to happen.  I realize this isn’t rational, but this is part of my anxiety disorder.  To those who don’t ever experience anxiety this probably sounds ridiculous, but to those that have occasions like this I’m sure you can relate.  This doesn’t happen daily or weekly to me.  These days I have pretty good control over it, but I still have these moments from time to time.  To be honest my husband doesn’t “get it”. He has now learned this happens with me sometimes and tries his best to understand, but I think to someone who doesn’t have anxiety like this it is a VERY hard thing to wrap your head around.  In the beginning it was a little scary for my husband when I would cry like my best friend died when in reality not much had happened.  It isn’t logical, but it is just part of having an anxiety disorder. 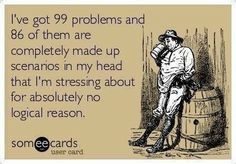 In the past I have had a couple attacks that leave me feeling like I am trying to breathe under water and can’t move.  I am thankful everyday that this isn’t a regular thing for me, but for some with an anxiety disorder this is a very real reality.  Through the years I have tried a few different medications, natural remedies, and talking to a therapist occasionally.  I think running has helped me a great deal.  With time I have learned what works best for me, but everyone is different.  I am Emelia and I have an anxiety disorder.

I’m hoping this doesn’t scare any of you away.  I chose to write this because of a conversation I had with someone the other day that a lot of “mom bloggers” seem to have it all put together and everything seems so perfect.  I think each person probably has some sort of struggle?  (At least I like to tell myself that). How are we suppose to help each other if no one ever talks about them though, so I’m laying my struggle out there.  If this helps even just one person than I am glad I wrote it…and if it doesn’t help anyone than maybe my hypothesis about not everyone is perfect is wrong.