Bob Iger, Disney’s CEO came on stage first and was very charming.  He than introduced John Lasseter.  Lasseter than played host to the lineup of new animation.  He introduced the directors and producers of the film along with the actors. 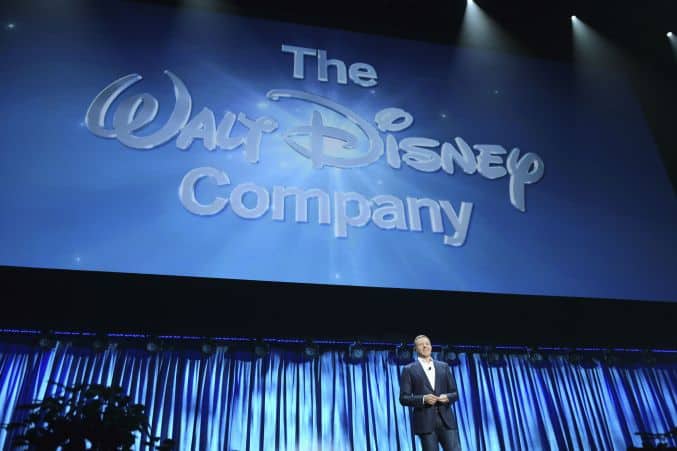 We got to see the first 10 minutes of Toy Story OF TERROR and it was amazing!  It is a new 30-minute halloween special that features the gang from the Toy Story films and premieres on ABC Oct. 16, 2013.  DEFINITELY TIVO THIS!

Get A Horse! made its premiere. Walt Disney himself is the voice of Mickey Mouse.  They went through all Walt’s old voice footage and put it together for the new movie.  Sooo cool!  It is black-and-white, “hand-drawn theatrical short follows Mickey, his favorite gal pal Minnie Mouse and their friends Horace Horsecollar and Clarabelle Cow as they delight in a musical haywagon ride—until Peg-Leg Pete shows up and tries to run them off the road.” This short combines the old school 2d with new CGI and is amazing.  We were all given 3D glasses to watch it and I was so impressed.

There are 2 new Tinker Bell fairy movies in the works.  One is The Pirate Fairy.  Christina Hendricks is the voice to Zarina the fairy and Tom Hiddleston is the voice of young James aka Captain Hook.  FINALLY a Tinker Bell movie that is somewhat leading to how she ended up in Neverland. 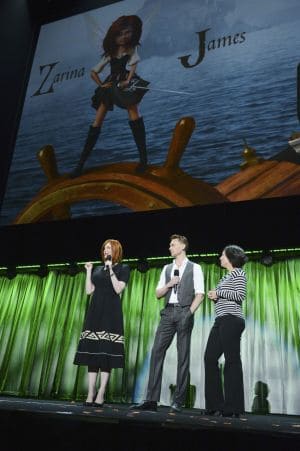 “When a misunderstood dust-keeper fairy named Zarina steals Pixie Hollow’s all-important Blue Pixie Dust, and flies away to join forces with the pirates of Skull Rock, Tinker Bell and her fairy friends must embark on the adventure of a lifetime to return it to its rightful place. However, in the midst of their pursuit of Zarina, Tink’s world is turned upside down. She and her friends find that their respective talents have been switched and they have to race against time to retrieve the Blue Pixie Dust and return home to save Pixie Hollow. With comedy, heart and epic thrills for the whole family, “The Pirate Fairy” sets sail Spring 2014.”  I am already really excited!

The other Tinker Bell movie coming is Legend of the NeverBeast, which “takes the Disney Fairies on an epic action adventure that’s full of heart and edge-of-your-seat suspense. Fun and talented animal fairy Fawn believes you can’t judge a book by its cover—or an animal by its fangs—so she befriends a huge and mysterious creature known as the NeverBeast.”  Look for this Spring 2015.

Pixar’s new movie The Good Dinosaur hits theaters May 30, 2014.  We were shown clips and found out the cast:  Lucas Neff, voice of Arlo; Bill Hader, voice of Forrest; Judy Greer, voice of Ivy; Neil Patrick Harris, voice of Cliff; John Lithgow, voice of Poppa; and Frances McDormand, voice of Momma.  Bill Hader, Judy Greer, and Lucas Neff all came out on stage.  I really like Judy Greer.  She often plays the obscure friend or main character sidekick in movie such as The Wedding Planner (JLo’s assistant), 13 Going On 30 (the backstabbing “friend” to Jennifer Gardner) , Arrested Development (Kitty)… you know who I’m talking about now right? haha 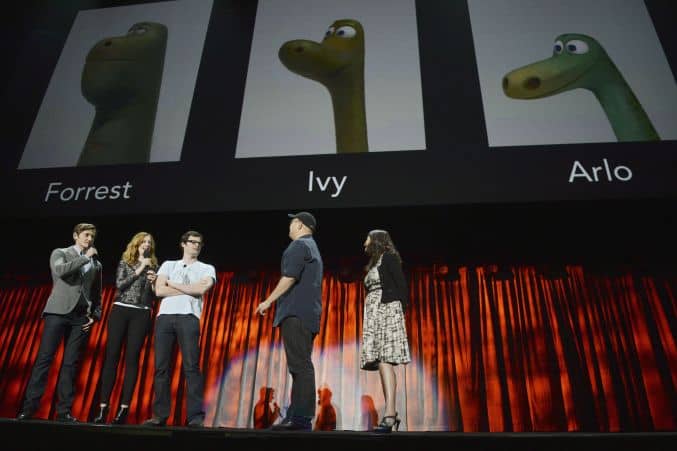 “The Good Dinosaur asks the generations-old question: What if the cataclysmic asteroid that forever changed life on Earth actually missed the planet completely and giant dinosaurs never became extinct?…The film is a humorous and exciting original story about Arlo, a lively 70-foot-tall teenage Apatosaurus with a big heart. After a traumatic event rattles Arlo’s tranquil community, he sets out on a quest to restore peace, gaining an unlikely companion along the way—a young human boy named Spot.”

We got to watch the new short Party Central featuring the character from Monsters University.  The characters are throwing a frat party and it is hilarious.  The movie will be the short before The Good Dinosaur next May.

They already have a sequel for Planes, which just opened today!  The sequel is Planes: Fire & Rescue.  Dane Cook came out on stage, who is the voice of Dusty.  Julie Bowen was announced as the voice of Dipper.  We got to see concept art and footage from the film.  Looks fun!  It opens July 18, 2014. 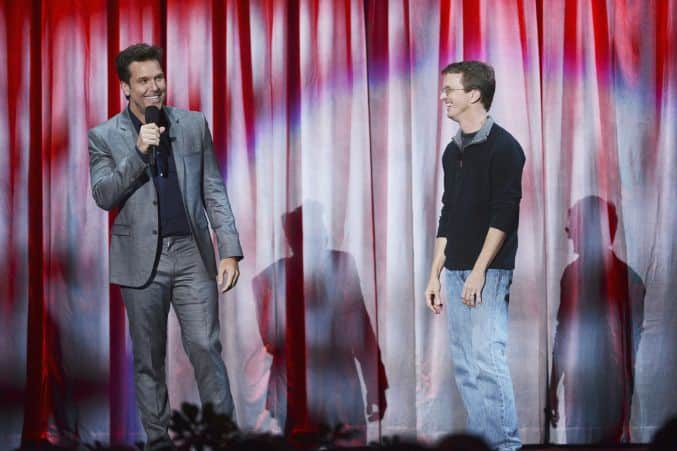 We for a peak of Big Hero 6 which is about a robotics prodigy named Hiro Hamada.  He lives in San Fransokyo. The concept is a mix of Tokyo and San Francisco and looks pretty cool.  Hiro has a robot named Baymax.  “Hiro joins forces with a reluctant team of first-time crime fighters on a mission to save their city. Inspired by the Marvel comics of the same name, and featuring comic-book style action and all the heart and humor audiences expect from Walt Disney Animation Studios, the CG-animated “Big Hero 6” hits theaters in 3D on Nov. 7, 2014.” 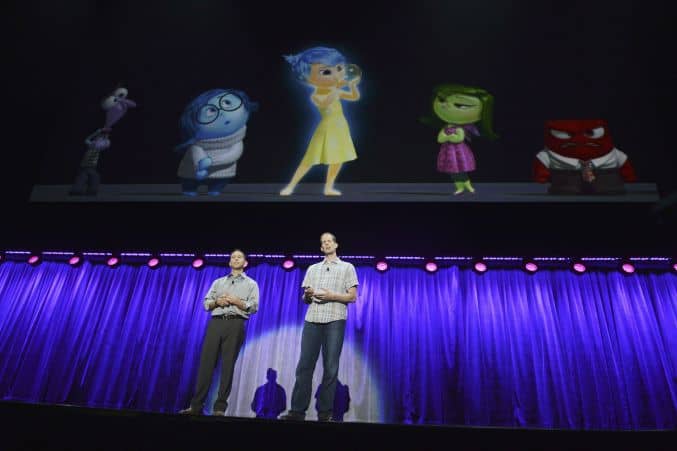 “Inside Out takes you to a place that everyone knows, but no one has ever seen: the world inside the human mind. Riley, an 11-year-old girl who recently moved with her family to San Francisco, is not the main character but the setting for the film. Moviegoers will go inside her mind to explore how memories are formed and how a mixture of five emotions—Joy, Disgust, Anger, Fear and Sadness—defines life experiences.” Looks for this June 19, 2015.  These clips probably got me laughing the hardest.  It looks really good and really creative. 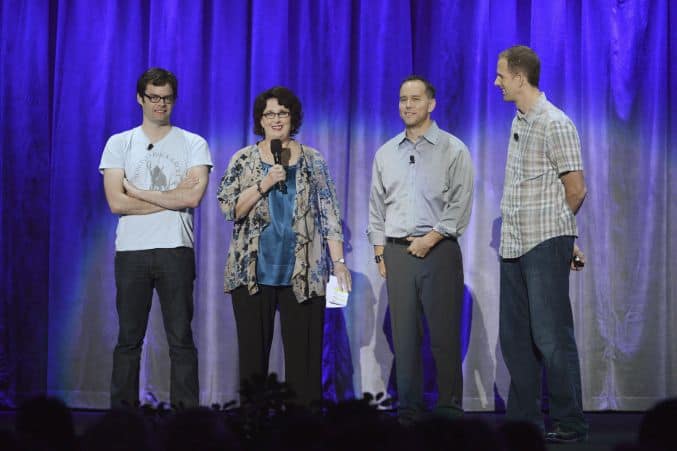 We also go to laugh really hard at Bill Hader was joking about being in 3 new Pixar films and wants to be Pixar’s new “lucky charm”.  Than John Ratzenberger came on stage who has been in 14 Pixar movies.  He came on stage with the Disneyland marching band.  “Ratzenberger joined Hader in a hilarious duel of one-upmanship over the multiple Pixar characters each has voiced.” 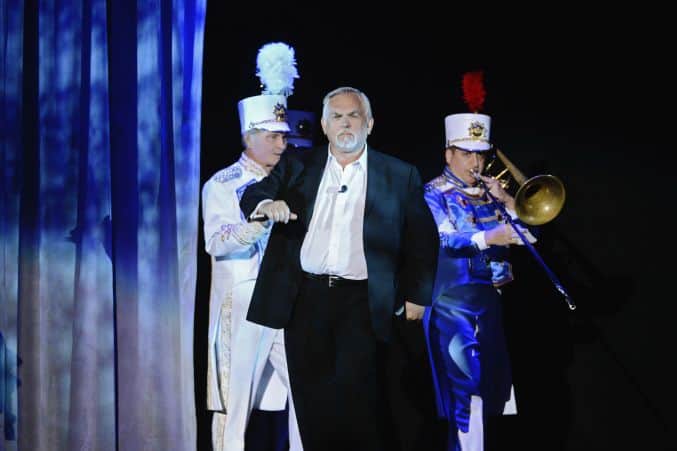 We were introduced to Zootopia (working title). “In the animal city of Zootopia, a fast-talking fox who’s trying to make it big goes on the run when he’s framed for a crime he didn’t commit. Zootopia’s top cop, a self-righteous rabbit, is hot on his tail, but when both become targets of a conspiracy, they’re forced to team up and discover even natural enemies can become best friends.”   We won’t be seeing this one until 2016 though.

A surprise to even the man himself  a veteran Disney Filmmaker was honored for 60 years at Walt Disney Animation Studios.  Burny Mattinson is one of the last Disney artists who worked with Walt himself.

Lastly we were treated to never-before-seen film footage from Frozen.  Kristen Bell came out and spoke (who is the voice of Anna) and Josh Gad (voice of Olaf the snowman) spoke who is hilarious.  Some of you might know him as the funny son named Skip on 1600 Penn.  The presentation ended with a live performance of the film’s song “Let It Go” sung by Idina Menzel, who provides the voice of Elsa in the film.  AMAZING!!!! Frozen opens Nov. 27, 2013.

Please pardon typos in this post since.  I got 4 hours of sleep last night and got up at 4:30am to attend the runDisney D2.3 mile Fun Run and than went straight to the “Waffle-inator” press breakfast and than straight into this 3 hour presentation.  I’m a little slap happy and a lot tired, but wouldn’t change anything for the world.  I had an amazing time.  I am in my hotel room trying to finish this up so I can get some sleep before all the fun starts tomorrow 🙂